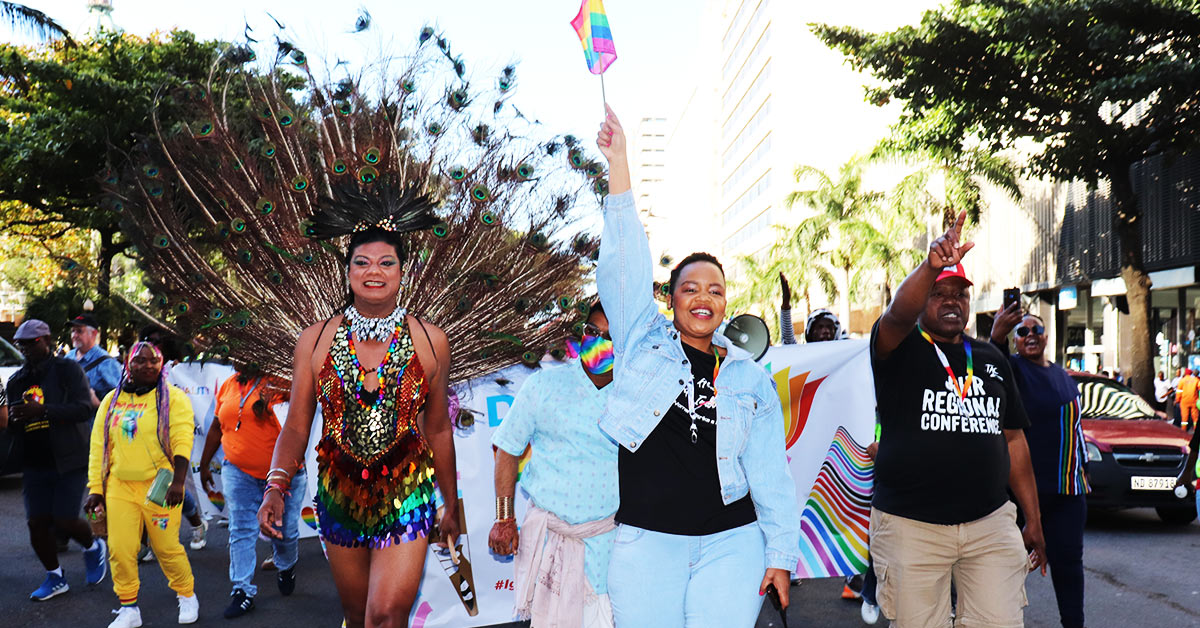 Durban Pride 2022 was symbolic and political, rather than the party that people are used to (Photo: Leslie Quan)

The recent 10th Durban Pride march was smaller than in previous years but no less passionate about demanding LGBTIQ+ equality and safety from hate crimes. Many, however, were disappointed that the festivities that are traditionally held after the march did not take place.

Thanks to Covid-19 and the associated lockdowns and restrictions, the last Durban Pride was held back in June 2019. The subsequent pandemic, recent floods, civil unrest and hate crime attacks in the province saw the Durban Lesbian and Gay Community and Health Centre, which organises the event, deliberating on how to best use their energy and funding this year.

Assisting community members in dire need and bussing supporters to hate crime cases was deemed to be a priority. As a result, the centre chose to drop the costly celebratory aspects of the event for 2022 and only hold a march.

“The feeling was what would we be celebrating when in 2020 and 2021 hate crime cases escalated across the country, with many in Durban and KwaZulu-Natal,” asks organiser Nonhlanhla Mkhize.

“We can’t be partying when so many are not able to celebrate with us. Our commitment and investment were towards making sure the messaging around the march gets out: That the gays are mad, the gays are angry. They would rather not have a party if their lives are at stake,” Mkhize explains.

And so, on Saturday 25 June around 300 people gathered at the City Hall in central Durban to march to Gugu Dlamini Park in a vibrant Pride protest.

“With a few hundred people taking to the streets, we made up for our size this year with colour, passion and determination. It was absolutely awesome to watch, and walk among such beautiful people,” says fellow organiser and chief safety official, Jason Fiddler.

A candle-lighting vigil was also held to honour those who’ve lost their lives to hate crimes and gender-based violence in KwaZulu-Natal.

This year, two suspected hate crime murders and one violent attack against LGBTIQ+ people have been reported in the province. In 2021, there were at least six LGBTIQ+ murders in KwaZulu-Natal.

“Saturday’s gathering remained hugely symbolic and political, rather than a party like people are used to. The people who gathered were passionate, and the diversity of religious and political speakers demonstrated that the city and the province are waking up to our daily struggles,” says Fiddler.

And although Durban Pride did not host its celebration this year, almost a dozen independently organised parties and functions in support of Pride were held over the weekend, including those of Same Sex Saturday and Club Altitude.

The below pictures of the 2022 Durban Pride march are courtesy of Leslie Quan.