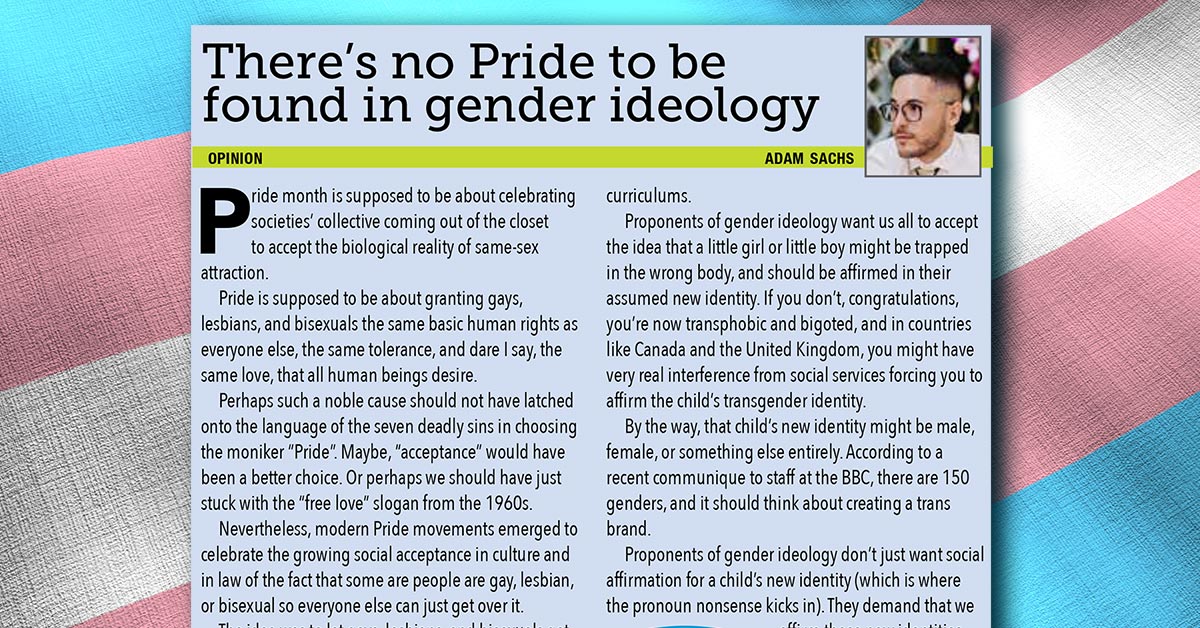 A hateful article written by a gay man and published in the South African Jewish Report newspaper has been condemned as both deeply transphobic and inaccurate.

Adam Sachs’ 30 June op-ed, titled There’s no Pride to be found in gender ideology, rails against the so-called “woke” addition of other identities to the LGB acronym and community.

Failing to acknowledge that transgender individuals were at the forefront of the early Pride movement, Sachs – who describes himself as “a proud gay, atheist and Zionist South African Jew” – claims instead that Pride was originally only focused on the rights of lesbian, gay and bisexual people.

He goes on to write: “We’ve gone from LGBTQ to LGBTQIA+ and beyond, all in the space of the past decade. At first, I didn’t really pay any attention to any of the new letters or the identities they represent. But the more I learn about them and the regressive ideology they actually represent, the more I believe it’s important to speak up and challenge the ideas we’re being demanded to accept and support as fact.”

Sachs attacks what he calls “an entirely new belief system… called gender” and warns that transgender and queer people are “attaching themselves to the LGB struggle for equal rights as if they were always part of it, by attempting to insert their beliefs into policies, laws, and school.”

He continues: “It all boils down to the simple and very dangerous idea that, according to gender ideology, it’s possible for someone to be born in the wrong body. Ask yourself whether this is something we should be exposing, teaching, and in fact indoctrinating our children into?”

Not done with dismissing the very identity and legitimate existence of transgender people, Sachs then lashes out at the idea of providing gender-affirming treatment for young people.

“Do I care if a 40-year-old man wants to castrate himself and dress in women’s clothes? I don’t. But no child could possibly ever be capable of consenting to their own castration, sterilisation, and the consequent erasure of their future sexual potential as men or women.”

Sachs concludes: “For some, these new Pride flags represent diversity and inclusion. But for many, they symbolise an ideological movement that’s antibiological, inherently homophobic, and hostile to gay people and women’s rights.”

Shemah Koleinu, a queer and Jewish-led human rights organisation, has slammed Sachs’ transphobic article as “an act of brutal violence against the LGBTQIA+ community.”

In statement, the group describes the piece as one that is “poorly researched, that presents unsubstantiated claims, that is rife with logical fallacies, and that at its core takes aim at an already marginalised and vulnerable group of people.”

It adds that “whilst freedom of speech should be upheld, and rigorous debate encouraged, a line must be drawn against the spread of fallacious hate-mongering, the cost of which is measured in human lives.”

Noting that “scientific evidence confirms the safety and efficacy of social and medical gender-affirmation,” the group asserts that, “it is the propagation of the ideas expressed in this article that lead, directly and indirectly, to homelessness, loss of opportunities, violence, and death amongst transgender youths and adults.”

According to the group, “The publication of such a piece, its unfounded assertions and arguments notwithstanding, represents a reckless and malicious attack on human rights and marginalised populations.”

In a statement of its own, the South African Association of Progressive Rabbis (SAAPR) also says it is “disappointed and dismayed” to learn of the publication of the transphobic article.

Both Rabbi Emma Gottlieb, Chair of the SAAPR, and Shemah Koleinu have called on the SA Jewish Report “to publish a retraction and [an] apology immediately.” To date neither has been forthcoming.

Reacting to the fierce criticism of Sachs’ article, the SA Jewish Report first amended the website version and now appears to have removed it completely. The piece is still available via an online archive as well as in the downloadable version of the publication.

In May, the SA Jewish Report was expelled from the Press Council of SA for refusing to apologise and retract an article that labelled a lobby group as antisemitic.