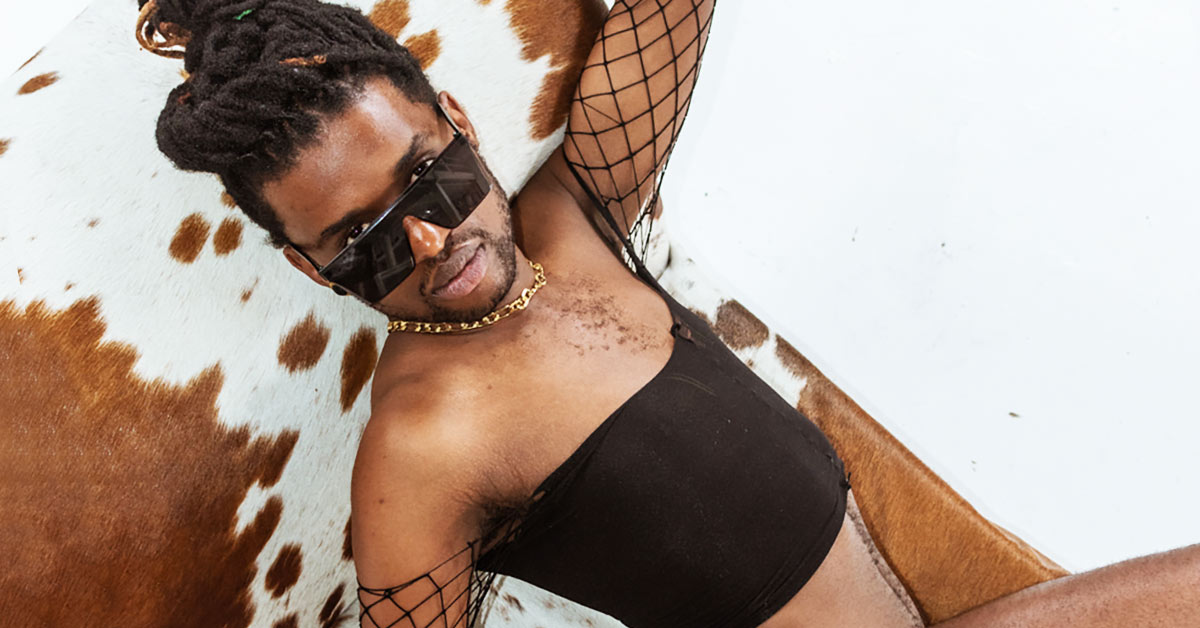 “I choose to be provocative because that is a valid form of expression,” says Gyre (Photos: Chris Dennis Rosenberg)

South African queer hip-hop trailblazer Gyre has had his fill of homophobia in the hip-hop scene. Now he’s speaking out, the consequences be damned.

Unsurprisingly, it hasn’t been an easy path to take. He recently went public about the homophobia he encountered from the influential SA Hip-Hop 24/7 platform, which censored a paid-for promotion of his new single Fem Physique.

Gyre was sent screenshots in which the administrator said to “remove that unacceptable ass” because it’s “not good for the brand.” This is despite SA Hip-Hop 24/7 having no qualms about posting images of equally or even more scantily-clad women in the past.

Gyre spoke to Mamba about his experiences navigating the world and the music industry as an openly queer and femme hip-hop artist.

Hip-hop has a notorious history of homophobia. What drove you to create your work in this unwelcoming genre?

When I was coming into my queerness, I couldn’t help but express it in rap. That’s how I started rapping. I needed to feel whole again, and rap saved my life! So hip-hop chose me. And I chose rap the art form, [but] hip-hop culture and the hip-hop industry is a completely different matter.

Is queerphobia pervasive in the hip-hop world or just a portion of it?

I think it’s pervasive in sections of the hip-hop community. However, also large sections of the hip-hop community because silence is also to choose the side of the oppressor. So that’s why I say it’s large. I’m not saying that hip-hop is inherently queerphobic. However, the community and the industry [seem to be] because it stays silent against homophobia.

What’s been the impact of being openly queer on your career?

It has both helped and hindered my career. It has helped because it’s a unique selling point in hip-hop, specifically in South Africa. That’s not lost on me. However, it’s also hindered me because that selling point is something that isn’t sold in South African society – there isn’t social buy-in in terms of queerness. So, there’s the irony of that. But I wouldn’t have it any other way. I’m gay. I’m proud.

How do mainstream audiences respond to your performances and work? Do they get it?

They’re very taken by it; they’re always intrigued and they’re always very excitable whenever they see me. Generally, they enjoy it because, despite whatever social pressure they might feel, they can’t help but enjoy the fact that I’m making good music. Do they get it? Sometimes they don’t. And it doesn’t matter because music is meant to make you feel.

Have most incidents of homophobia that you’ve experienced been overt or have they been more along the lines of microaggressions?

I think more so microaggressions. The most recent incident [however] was an overt incident where I received screenshots saying “remove that disturbing ass” because I’m queer. However, had I not gotten those screenshots, I would have thought it was micro-aggressive. There are other overt means of homophobia, but I can’t say it is because I can’t prove it. And that’s the problem with what happens with minorities; these prejudices are done behind the scenes. I’m just over not talking about it. I want to speak up! 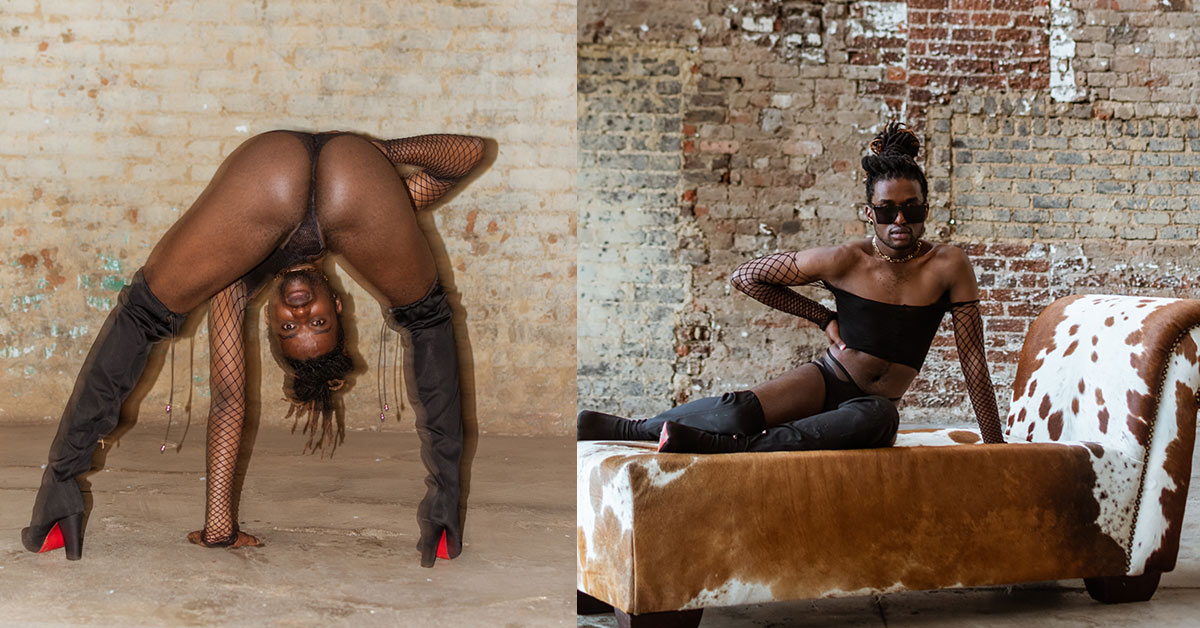 What kind of response have you received since you posted about it on social media?

I received so much love and support and guidance from so many important people within the queer community, [such as] Dr Bev Ditsie… And I saw that Moshe Ndiki retweeted it as well. It was nice that someone in the industry stood up for me with that simple retweet. I’m grateful for that support.

What’s been the most visible experience of homophobia that you’ve faced as an artist?

I remember performing in Pretoria and someone throwing something at me, and I ducked. That was something that could have physically hurt me. I had another situation where I was told that I was gonna get to perform and play my song and I was in heels the whole night till 7 a.m. And I didn’t get to play my song. Other than that, I honestly can’t think of something off the top of my head because I just have blocked it all out. I’ve just always moved on.

You said on Twitter that you’ve been scared to speak up about this.

I was scared to speak up about homophobia in the hip-hop community because I didn’t want to be painted as making it seem as if I need that kind of controversy to get some form of traction. [But] I have shown that my talent speaks louder than my sexuality. Now, I don’t want to keep quiet about it. I have nothing to prove, and I have nothing to lose.

Your sex-positive expression of queerness causes waves in the hip-hop world, yet the overt sexualisation of women has been completely normalised…

There is a double standard that exists in the hip-hop community with regard to sexual expression that is homosexual and that is not heteronormative. And that’s because there is a huge prejudice that exists in society. The fact that still to this day, children are taught about safe practices with regards to heterosexual sex in Life Orientation and nothing about homosexual sex is bleeding into cultural sectors, i.e., hip-hop, and any other sectors within society. So, it’s a societal issue. It’s not a hip-hop issue. Hip-hop is just highlighting it.

You are provocative in your image and work. Why have you made that choice?

You’ve stated that being a femme queer man has added to the queerphobia you’ve faced.

Being a queer femme body is completely different to being a queer masc body because masc queer bodies are closer to the status quo, which is heteronormativity. And when you’re a queer femme male body it’s harder. When you are femme and male, nothing about you is attractive to heterosexual men. Suddenly expressing your sexuality and sensuality is crass because they know dark skin to be crass, femme male bodies to be crass, queerness to be crass…. whereas they are crass.

What about the queer community?

We need to heal ourselves from putting masculinity on a pedestal. It’s something that I honestly deal with myself, so I’ll be honest enough to say that that is a conversation that needs to happen. And that’s what censorship does; it doesn’t give us the opportunity to deal with these kinds of issues that we as queer people need to deal with – this internalised homophobia that’s the result of years of heteronormative propaganda… of, dare I say it, heteronormative imperialism.

Lil Nas X has broken barriers in the US hip-hop genre by expressing his queer sexuality and still achieving chart success. Has he made an impact on the acceptance of black queer hip-hop artists here in South Africa?

No, I don’t think Lil Nas X’s impact has reverberated into this country yet. I think it’s down to myself and my fellow queer artists to do it in this country. Because ultimately, he is so removed from the realities of South African society. And in as much as he is important because he shows that that form of existence can be valid and successful within the hip-hop space and the mainstream space, it doesn’t necessarily mean that it’s happening here. If it was, I’d be signed.

Are you hopeful that things will change?