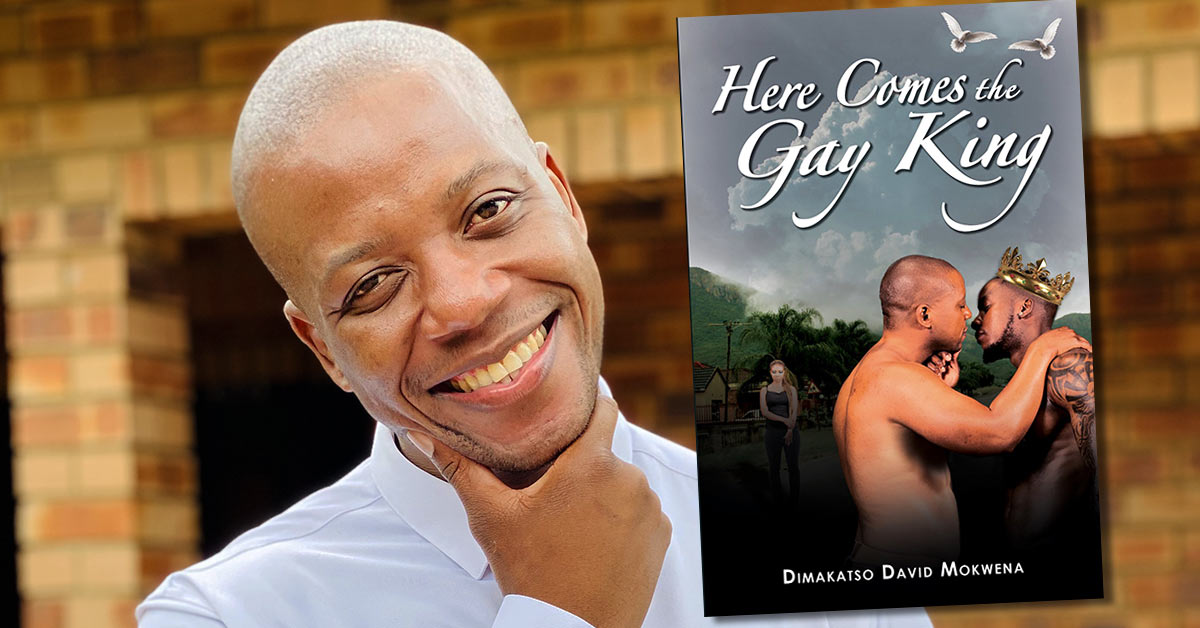 Dimakatso Mokwena is the author of the new South African queer novel, Here Comes the Gay King. We sat down with him to find out more about his work.

“There is really not a lot of queer South African fiction,” says Mokwena. “I wasn’t seeing myself reflected in a work of fiction and I think there is this continuing erasure of queer people when it comes to society. I just decided that I should contribute to the discussion.”

Mokwena identifies as a black gay man, a Christian, and a dad. He has only recently added author to the list with the publication of his first novel, Here Comes the Gay King.

The story centres around Peace, a gay man from the village who lives in the city. Peace has been chosen by his ancestors to lead his people, however, there are obstacles to his ascension to the throne: he is a gay man who is in love with Thomas, his community are ambivalent towards having a gay king, and, on top of that, he is required to marry his brother’s widow in order to take the throne.

“I believe you can still embrace your African identity while living your life as a gay person.”

Here Comes the Gay King not only explores the tribulations in Peace and Thomas’s relationship and how they deal with these challenges, but it also tackles traditional African views of homosexuality.

While the novel is essentially a love story, it also dips into cultural elements and seeks to smash stereotypes surrounding homosexuality in black traditional society.

“Increasingly, we are seeing more gay people taking leadership positions,” says Mokwena, “The message I want to convey is that you can be gay and still be king without having to give up your cultural identity.”

Mokwena knows what he is talking about. He grew up in a village in Limpopo before moving to the city while he studied journalism. The city appealed to him, so he stayed, visiting his home village when he can.

“More gay people are coming out to own and accept themselves. In the rural communities it’s kind-of accepted – as long as you don’t say you’re gay, or show that you’re gay. There is still this idea that being gay is un-African or that it’s a white person thing,” Mokwena explains, “But Modjadji the Rain Queen had wives. I believe you can still embrace your African identity while living your life as a gay person.”

And this is exactly what his book wants readers to take away. He addresses homophobia and feminism in his work – without even using those terms.

More than that, Mokwena hopes that his book will inspire more queer South African writers to take up the task of creating African queer literature and to reach a wide audience.

Here Comes the Gay King can be ordered from Takealot.com or from Mokwena directly at the cost of R330.00. Just DM him on Twitter or Instagram. His handle for both platforms is @selfierunnerza. If you prefer e-books, you can order the novel from Amazon.com.