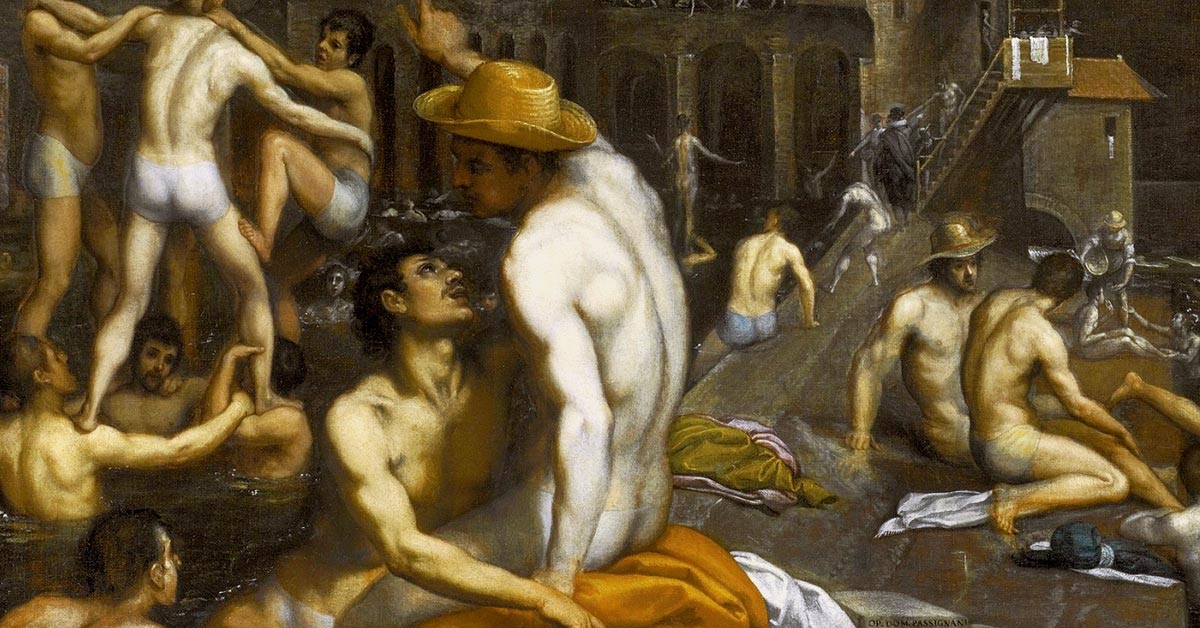 Today’s equivalent of the gay bath house experience seems to have migrated from steamy saunas to steamy sex ordered via Grindr and other apps. Question is, though, have these hook-up apps made the whole bath house thing obsolete?

Ok, let’s be realistic. The ancient Greeks and Romans did a bit more than bathing at their bath houses. Of course, they did. These ancient bath houses, however, were not for a quicky in the misty steam of the waters. They were also where business deals were struck. Sex and business. Doesn’t seem like much has changed since then, actually.

Looking back through time, it seems as though bath houses and bath house culture has existed in some form or another since before Da Vinci. The whole scene was attractive to gay men – single and married – as it allowed them the freedom and anonymity to express their sexuality fully in societies that frowned upon homosexuality.

And bath houses aren’t just a European phenomenon. Japanese bath houses, known as “hattenba”, cater for gay clientele who wanted a quick hook up. Oh, and let’s not forget that since we mentioned Europe, one of the biggest gay bath houses in Europe is owned by the Vatican City.

That’s right. The home of the Holy Father, the Pope himself. The seat of Catholicism. The same religion that is staunchly anti-gay. (Although the Vatican said it bought the bath house as a residence for clergy. Right. Clearly nothing to do with gay priests, then.)

Bath houses provided – and still do – a sanctuary, a safe space, and freedom for homosexual men. Being gay is still largely stigmatised, despite the massive changes in society’s attitude in many countries across the globe.

However, the freedom we enjoy today was most certainly not afforded queer men and women even two decades ago. The Bath House became the one place where men could, quite literally, let it all hang out.

Recently two popular bath houses in Gauteng were shut down. This led some to believe that this was the end of bath house culture in SA. After all, gay men had to survive through the Big Brother style regime of Apartheid as well as the AIDs crisis in the eighties.

Both of these would have undoubtedly cooled the ardour of the most determined gay men. Yet, they existed and persisted and bath house culture for South Africans became not just a place to escape into their authentic selves, but also a place to escape from the horrors of the society that existed around them.

Right, now to answer the question, are bath houses in South Africa still a thing? After all, you can pretty much order your perfect man over the internet these days.

Well, surprisingly, the answer is yes. Bath houses and saunas may be few and far between in Mzansi, but they do exist, and they are frequented. One website claims its clientele is 80 percent Christian. Indeed. Statistics are impossible to find, though, so it’s not easy to tell the age group of the visitors, or their race, or even the frequency of their visits compared to the frequency of those who find convenient intimate partners through Grindr. As a community we are notoriously shtum on these matters.

If nothing else, the existence of both bath houses and hook-up apps, provide the gay community with more options. Both provide a means for men to find sex – and even love, in some cases. It just depends on what you prefer to blow your hair back. Or anything else.