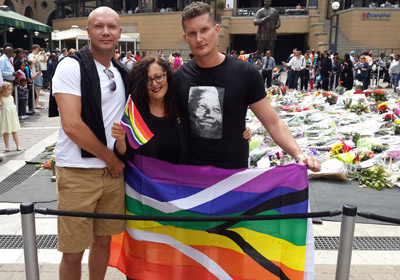 The creators of the Gay Flag of South Africa have honoured Nelson Mandela’s role in securing LGBT equality.

On Saturday, Eugene Brockman and Henry Bantjez, along with American-based activist Melanie Nathan, visited Nelson Mandela Square and placed small gay flags amongst the tributes laid out in honour of the late human rights icon.

They caught the attention of the public, posed for pictures while holding up a large flag and were interviewed by television journalists about Mandela and LGBT rights in South Africa.

“We wanted to humbly and simply place flags among the flowers to pay respect; to thank him for being open to LGBTI equality and to do it for all the LGBTI South Africans who did not have the means to be there,” Brockman told Mambaonline.

“Nelson Mandela’s legacy created a haven where every South African can be free to be who they are. More than that he was a beacon of inspiration that ordinary people can accomplish extraordinary feats and even the seemingly impossible,” he added.

A clearly emotional Nathan, a South African born lawyer and LGBT rights blogger living in San Francisco, said that she happened to be visiting South Africa on business when Mandela passed away. The trio later also visited Mandela’s home in Houghton.

“It felt important to take a symbol of LGBTI freedom to the house where he passed on as well as Mandela square to thank him for our freedom and equality in South Africa,” said Nathan. “I felt overwhelmed with emotion when I placed the gay flag amongst the thousands of flowers. There are really no words to describe the mix of sadness, celebration and hope.”

The Gay Flag of SA non profit organisation (NPO) launched its flag in 2010. It is an adaptation of the international gay rainbow flag created by Gilbert Baker in 1978 and incorporates elements of the South African national flag.

The NPO has been behind a number of LGBT rights campaigns, most notably protests in 2012 against calls by Phathekile Holomisa, from the Council of Traditional Leaders of South Africa, to remove sexual orientation protection from the Constitution.