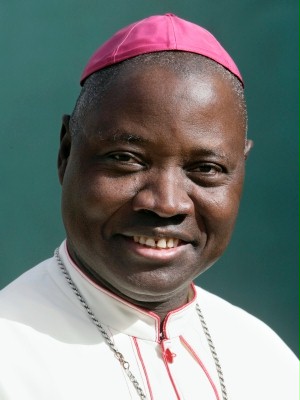 It appears the Vatican has stood by as Nigeria’s Catholic Bishops have shamefully congratulated President Goodluck Jonathan for signing his country’s draconian and inhumane anti-gay bill into law last month.

The Catholic Bishops’ Conference of Nigeria (CBCN) said that the law was “a right step in the right direction for the protection of the dignity of the human person and commended the president for the courageous act, in spite of pressures from some international communities.”

According to an undated post on the CBCN website, the president of the conference, Archbishop Ignatius Kaigama, wrote to Jonathan “on behalf of the Bishops and all Catholic faithful” in the country.

“Your decision and that of your administration in conjunction with the Federal Legislature, not to bow to international pressure in the promotion of unethical and immoral practices of same sex union and other related vices is indeed a courageous one and a clear indication of the ability of our great country to stand shoulders high in the protection of our Nigerian and African most valued cultures of the institution of marriage and protection of the dignity of the human person,” wrote Kaigama in the letter.

The Archbishop added: “We commend you for this courageous and wise decision and pray that God will continue to bless, guide and protect you and your administration against the conspiracy of the developed world to make our country and continent, the dumping ground for the promotion of all immoral practices, that have continued to debase the purpose of God for man in the area of creation and morality, in their own countries.”

These shockingly homophobic statements are distinctly out of line with the Vatican’s stance on homosexuality. While the church is not in favour of same-sex marriage rights and continues to believe that homosexual acts are not acceptable, it also does not support criminalising and jailing gays and lesbians, as is the case in Nigeria.

In December 2009, a representative from the Vatican told the United Nations General Assembly panel that the Holy See “opposes all forms of violence and unjust discrimination against homosexual persons, including discriminatory penal legislation which undermines the inherent dignity of the human person… The murder and abuse of homosexual persons are to be confronted on all levels, especially when such violence is perpetrated by the State.”

While the Nigerian law is called the Same Sex Marriage Act, it does much more than ban gay marriage. It also outlaws “any arrangement between persons of the same sex to live together as sex partners” with a 14 year prison sentence. It criminalises “the public show of same sex amorous relationship directly or indirectly” – for example, holding hands or even expressing one’s love to a member of the same sex – with a 10 year prison sentence and bans gay groups and organisations.

That the Vatican should stand by and allow the CBCN to support a venomous and immoral law such as the Nigerian legislation is disgraceful.

The silence on the part of the Vatican with regard to the Nigerian Bishops’ appalling homophobia may reflect a fear of worsening the growing schism in values between Christian churches in Africa, which remain deeply conservative, and those in the rest of the world.

The Anglican Church is facing a similar challenge, with African branches vocally backing anti-gay legislation and threatening to split from the English parent church over how to handle the issues of homosexuality and gay marriage.

While Pope Francis last year stated that he is in no position to judge gay people and has appeared to soften on the issue, he has failed to heed a call by Human Rights Watch in October 2013 to personally and publicly condemn violence and discrimination against LGBT people. He was also urged to ensure that Catholic officials act in accordance with church teachings when it comes to LGBT people, but also appears not to have done so – at least in Nigeria.

It appears that the Catholic Church now espouses two sets of values – one for the West and one for Africa. It’s a deeply cowardly and unprincipled position.