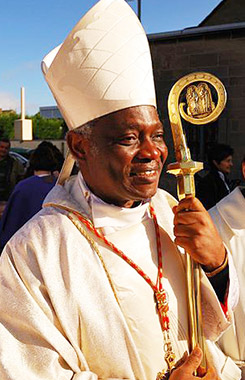 In the first significant comment on Uganda’s anti-gay law by the Vatican since its enactment, a senior cardinal – who is considered a papal contender – has criticised the draconian legislation.

Cardinal Peter Turkson, who is from Ghana and is the president of the Pontifical Council for Justice and Peace, said on Tuesday that gay people should not be jailed.

According to the UK’s Catholic Herald, Turkson told reporters at a Bratislava conference on the church and human rights that “homosexuals are not criminals” and that they should not face life in prison, as stipulated by the Ugandan law.

The comments are surprising because in February last year, Turkson suggested in an interview with CNN that homosexuality and the sexual abuse of children by clerics are linked.

He said that because of the taboo on homosexuality in Africa, “African traditional systems kind of protect or have protected its population against this tendency” of child abuse.

Turkson’s latest positive statements are in stark contrast to Uganda’s Catholic Bishops who have not only loudly condemned homosexuality but have stayed silent on the draconian law since its passage.

Nigeria Catholic Bishops, however, have shockingly backed their country’s own recent anti-gay law, calling it “courageous” and “a right step in the right direction for the protection of the dignity of the human person.”

The Vatican has not publicly called them to account, despite their hateful stance being in conflict with the church’s official position of opposing the criminalisation of gay people.

In December 2009, a representative from the Vatican told a United Nations General Assembly panel that the Holy See “opposes all forms of violence and unjust discrimination against homosexual persons, including discriminatory penal legislation which undermines the inherent dignity of the human person… The murder and abuse of homosexual persons are to be confronted on all levels, especially when such violence is perpetrated by the State.”