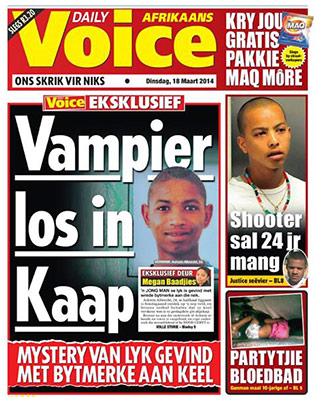 “Vampire loose in the Cape”: Aswin Albrecht’s murder as covered by the Daily Voice

Another apparent LGBT horror murder has come to light, this time in the Cape Town township of Manenberg.

According to the Reach for Life Foundation, 24-year-old Aswin Albrecht was allegedly killed by seven gang members on the 16th of March.

The NGO’s Lolita Marcelee told Mambaonline that Albrecht’s body was found in a field near his home. He was lying face down, with his hands and feet tied. His pants and shoes were scattered next to him.

There are reports that he had bite marks on his neck and that his genitals were cut off. Marcelee said that the young man had also been attacked and mutilated by his alleged murderers’ dog.

The story was first reported by the Daily Voice Afrikaans tabloid last month under the headline “Vampire loose in the Cape,” but appears not to have been picked up by other media. Mambaonline only became aware of the incident recently.

Marcelee said that Albrecht, who was buried on the 19th of March, identified both as gay and transgender. She believes that he was killed because of his sexuality and gender identity. “He was very quiet, unemployed and he had a bad family situation.”

She explained that there have been at least three LGBT hate-crime murders in the last five years in the area, which has been plagued by gang-related violence and shootings. 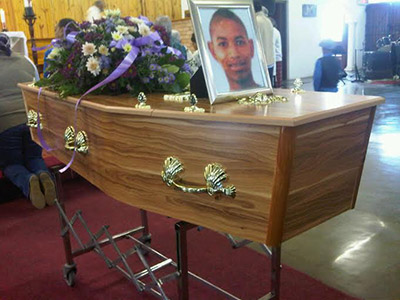 Albrecht’s coffin at his funeral (Pic courtesy of Lolita Marcelee)

“It’s every day discrimination,” Marcelee revealed. “We fight every day with gangsters and drug lords. They throw stones at us. It’s very tough if you are gay in Manenberg – there is no education or role models. Gay youth are thrown out of the house, especially if they are Muslim, because it’s not accepted.”

Marcelee claimed that four men had been arrested in connection with the murder but that they had been released due to lack of evidence. She accused the police of being uninterested in the case.

“The police never help. They don’t take us seriously. I’m pushing them to give me answers,” she added.

Mambaonline was not able to contact the investigating officer at the time of publishing this report.

Marcelee said the the Reach for Life Foundation, which provides support for LGBT people in Manenberg, Hanover Park, Heideveld and Mitchell’s Plain, is desperate for funds. If you can assist, please contact her on lollamarcelee@gmail.com.