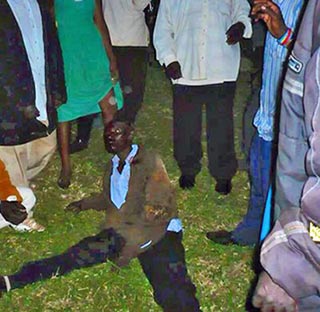 UPDATE: Questions have been asked regarding the veracity of this report. Click for an update here.

There are unconfirmed reports that seven LGBT Ugandans have been stoned to death in rural parts of the country over the last few weeks.

The claims were included in a press statement from Friends New Underground Railroad (FNUR), a Quaker solidarity initiative helping LGBT people in Uganda.

The first six murdered this month, according to reports from Ugandan LGBTI activists sent to the group, were three gay men, two lesbians and a transperson.

“They were killed by stoning. One who survived (still breathing after stoning) was burnt alive using kerosene/paraffin and a match box,” a witness said.

A seventh gay man, aged 28, was reported to have been attacked by a mob.

An eyewitness said in an email that he convinced the mob to let him take the victim to the police but rescued him instead. The man was reportedly denied medical care because he lacked funds to pay and later died from his injuries.

Documentary evidence of the attack was provided, including pictures from the scene showing a young man sitting on the ground, his face and neck covered in blood.

The names, identities, and locations of the victims and the witnesses were not being publicly disclosed by FNUR at this point for security reasons.

The group blames the worsening climate for LGBT Ugandans on a backlash from anti-gay politicians and religious leaders that’s followed the recent annulment of the Anti-Homosexuality Act.

“While the repeal of the law is wonderful, it has made it more dangerous for many LGBT people,” said Gabi Clayton, Co-manager of FNUR.

The organisation revealed that it had evacuated 65 people in the last few days from Uganda because they were in immediate danger.

Several Ugandan rights groups in Kampala and researchers are said to be launching independent investigations into the stoning reports.