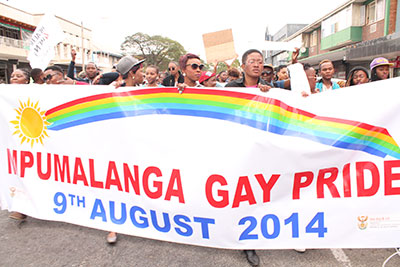 The province of Mpumalanga made history when it hosted its first LGBTI Pride march and celebration in the provincial capital of Nelspruit (Mbombela) last month.

The event was held on Saturday 9 August under the theme of “Moving Forward, Proud, Strong & United,” and was supported by numerous local LGBTI groups.

It intended, according to the organisers, to take a “stance against discrimination and violence towards the LGBTI community, promote our self-affirmation, dignity, equality rights, increase our visibility as a social group, build community, and celebrate sexual diversity and gender variance.”

Around 1,000 participants gathered at the SABC office and marched through the city’s streets to Nelspruit Plaza. They then spent the rest of the day at Oorwesig Garden Park enjoying a post-parade picnic.

“It was wonderful,” commented organiser Joy Kunene, “It was our first Pride and it was a real success.”

She added that the response from the community to the march was positive. “People even joined the march and marched with us. The police were visible and supportive. They gave us around 20 police and traffic officers to assist.”

Kunene said that one of the highlights of the event was the launch of the LGBTI Mpumalanga Movement, an umbrella group for LGBTI organisations in the province.