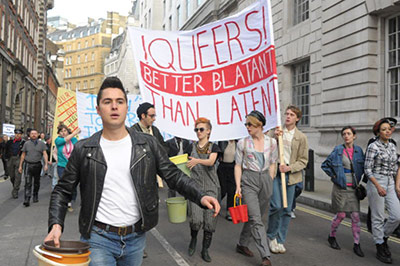 Members of GLSM take to the streets in Pride

Their protests were met with a scale of police brutality that their small villages and tight-knit communities had never before experienced. Injustice reigned. The days were literally dark (with utilities unpaid) and friends were few. Surprisingly enough, there was another group that could absolutely relate to these tribulations: gays and lesbians in 80’s London.

With the remarkable purity and passion of un-thought-through spontaneity, a young gay activist from Northern Ireland named Mark Ashton (superbly acted by American newcomer Ben Schnetzer) manages to convince his close circle of gays and a lesbian (singular, it was to begin with) to take buckets and raise money in support of and solidarity with those remote striking miners.

The idea was neither popular with the London scene at the time nor was it taken seriously by the mine unions. But this small group managed to raise a great deal of money. With no union accepting money from Gays and Lesbians Support the Miners (GLSM), the young activists hop on a minibus and trek over to the first Welsh mining village they can find in the map book. And so evolved a story that would have remarkable impact on multiple lives, gay and straight; eventually leading to a change in UK laws oppressing LGBTI folk.

This historical prelude is necessary as the UK film Pride now released here in South Africa is squarely, albeit fabulously, about real recent history that, until filmmakers took up the project, was relatively unknown or unremembered.

Every now and then a motion picture comes along that defies convention, breaks boundaries and enlivens the soul. Pride does this so successfully, so subtly and with such universal humanity that it is simply irresistible. With a distinctive ensemble cast of very well known British and Welsh actors, dynamic new talent and the understated direction of a theatre professional, the film manages to sustain consistent laughter, tears and deep empathy in its audience.

This is not a small film. With over 70 speaking parts, the rolling grandeur of the Welsh countryside and political events of great magnitude, the quaintness of village life and the turmoil of queer life are interposed. Fundamental common ground is claimed in a way that sees numerous characters given wide berth in which to evolve and grow in the audience’s view. This is a triumph of scriptwriting, direction and performance.

Bill Nighy (Hitchhiker’s Guide to the Galaxy; Pirates of the Caribbean III) stars as the mild-mannered mining club secretary, Cliff. “This story was complete news to me,” he explains “I was beyond keen to be a part of it. I will hazard a guess that this is the most important film of the year, in terms of history. When I was a young man you could get seven years in jail for any public demonstration of affection if you were gay; someone only needed to say they had seen you. They could lie and they would be believed; it’s not greatly to our credit as a society. The fact that these two stories – the miners’ strike and the history of British gay culture – dovetail together is exquisite… This has been one of the best jobs I’ve ever had.”

The film is understated British filmmaking at its best. It is genuinely, often side-splittingly funny, with moments that take your breath away. The characters are a delight to watch and the re-creation of the early 80s period in the UK is faithful, without being gauche. There is, though, Dominic West’s (300; The Wire) distinctive Brakpan-esque mullet. 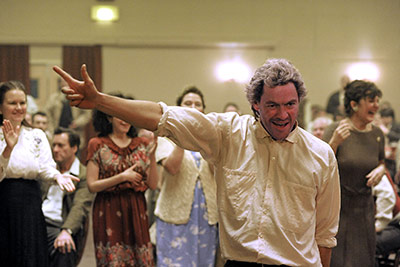 Dominic West shows off his disco moves in Pride

Speaking of which, apart from a charming scene-stealing Welsh granny with lesbian fascination, it is Dominic’s character Jonathan, a tailor known for his flamboyance and theatricality, whose dance moves in a particularly memorable scene in a mining club hall, and whose gravitas as UK’s HIV patient #2, bring a distinctive and mature narrative thread to the story that are both joyous and wholly moving to behold.

“Stephen’s script was a page-turner,” says West. “And there are very few that are that well written, have such a tight structure and have that much heart. I read it three or four times and I cried at the end every time, it’s so beautifully written.”

Every now and then there comes a movie you not only have to see more than once, you actually need to own the DVD. Pride is calling for a place in your cinematic life. Embrace it!