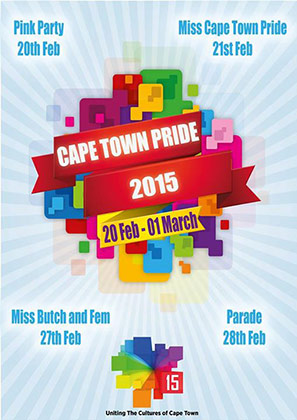 It’s time once again for Cape Town’s LGBTI community to take to the streets to celebrate Pride.

The Cape Town Pride 2015 festival takes place from 20 February to 1 March and will, as always, feature a series of diverse events.

The most anticipated and visible event, of course, is the annual parade which is set to turn the city pink on Saturday 28 February.

This year Pride will ‘Return to the Rainbow’.

The theme was chosen “to remind all Capetonians of their very special role in, and the contribution they can make towards, the Rainbow Nation and the promotion of human equality.”

* The Millionaire’s Ball charity gala dinner, which was scheduled for Monday 23 February, has been replaced with an online auction, with the proceeds going to Cape Town Pride. For more information, go to the Facebook event page.

The highlight of the festival, the Cape Town Pride Parade starts at 12pm in front of the Green Point Traffic Department on Saturday, 28 February. Proud LGBTI community members, their friends and family members as well as companies that support equal rights are invited to participate.

Each float costs R250 to be entered into the parade, while stalls costs range from R300 to R600. Applications can be done on www.capetownpride.org.