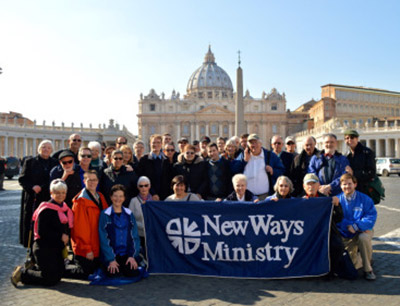 The New Ways Ministry pilgrimage group at the Vatican

For the first time in its 38-year-history, an American gay Catholic organisation has received a warm welcome at the Vatican.

A pilgrimage group from the New Ways Ministry were surprised when they received VIP seating at the papal audience in St. Peter’s Square, Vatican City, on Ash Wednesday, this week.

According to the ministry’s blog, the leader of the group and New Ways co-founder, Sister Jeannine Gramick, wrote to Pope Francis in December, asking him to meet with the group during their visit to Italy.

Before their departure, she received a letter from Archbishop Georg Ganswein, Prefect of the Papal Household, letting her know that he had reserved tickets for the group for the audience, which she assumed was for general seating.

Sister Gramick soon learned that they were actually VIP tickets. “When the group arrived at St. Peter’s Square in the morning, we were guided by papal ushers to the level of the Square where the pope sits. All were astonished!” wrote New Ways Executive Director, Francis DeBernardo, on the blog.

He said that while they were not able to meet the pope or shake his hand, “it is very significant that the Vatican responded so positively to an LGBT group by giving us such a prominent place at the audience.”

DeBernardo revealed that, “When the pope passed by our group, we all sang All Are Welcome, a popular hymn which calls for an inclusive church. We also called out several times that ‘We are LGBT Catholics!’”

He noted that in past pilgrimages led by Sister Gramick to Rome under the two former popes, John Paul II and Benedict XVI, their presence was ignored at the papal audiences.

The group weren’t identified as gay pilgrims on the Vatican’s list of attendees for the audience, but as a “group of lay people accompanied by a Sister of Loretto.”

Speaking to AP after the audience, DeBernardo commented that, “We both love Pope Francis, but even Pope Francis needs to learn a lot. He doesn’t accept the recognition of [gay] couples but the steps he’s taking are good first steps.”

“He has to meet more lesbian, gay and transgender people, and I think he wants to,” added Sister Gramick.

While Pope Francis appears to be ushering in a new, more welcoming approach to LGBT people in the church, he’s made it clear that he does not support same-sex marriage, sees it as a threat to the family and continues to campaign against efforts to legalise these relationships.