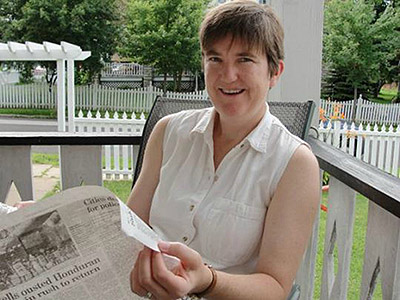 The hypocrisy of a US Catholic school has been highlighted after it fired a long-standing and much-loved lesbian teacher.

Margie Winters was dismissed from the Waldron Mercy Academy, a private Catholic school in Philadelphia, after two parents apparently complained to the school and the Archdiocese of Philadelphia that she is married to a woman.

Parents were informed in an email by Principal Nell Stetser that while Winters had made “amazing contributions” in the eight years she had worked for the school, she would be let go because her “life choices… contradict current Church teachings.”

News of her firing comes weeks after the US Supreme Court legalised same-sex marriage and has led to a public fire-storm. A vocal group of parents and students has come out in support of Winters, calling for her to reinstated.

Winters, who married her wife in 2007, told Philly.com that shortly after she was hired she was advised by the principal to avoid discussing her marital status with parents.

“So that’s what I’ve done. I’ve never been open. And that’s been hard,” she said.

Philadelphia Archbishop Charles J. Chaput has praised the school’s callous action, saying on Monday in a statement that it had shown “character and common sense”.

“Schools describing themselves as Catholic take on the responsibility of teaching and witnessing the Catholic faith in a manner true to Catholic belief. There’s nothing complicated or controversial in this. It’s a simple matter of honesty.”

He said that, by firing Winters, Waldron Mercy had shown “character and common sense at a moment when both seem to be uncommon.”

Philly.com columnist Ronnie Polaneczky, however, accused the archbishop and the school of being selective about who they choose to fire for violating Catholics teaching, writing that they “will continue to look the other way when their hetero employees behave in ways that aren’t by-the-Catholic-book either.”

He pointed that some of the school’s teachers are divorced, which, like homosexuality, is described as “a grave offense against the natural law” by the church. Other teachers are in unmarried relationships, which is also against Catholic teaching. Yet, they get to keep their job.

“So let’s call Winters’ firing what it is: An act of despicable discrimination based on nothing but her homosexuality,” said Polaneczky.

“It’s a sad day when our students must witness the cruel and flawed analysis of leaders like Cardinal Chaput,” added Lisbeth Meléndez Rivera from the Human Rights Campaign (HRC). “This sends a message that there is no place in the church for us, the LGBT faithful…”

“We call on the school to reinstate Margie Winters, and look to the day when Catholic leaders like Cardinal Chaput have the strength and courage to embrace our lives, to allow us to earn an honest living, and to participate in the education of our children,” she said.