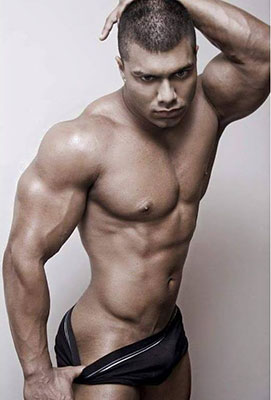 The alleged owner of a gym in Durban has described gay men as “sexually sick perverts” in an astonishing homophobic Facebook tirade.

On Tuesday, Jerome Michael Nayanah, who claims to be the owner of a gym in Westville, wrote on Facebook  that his picture and contact details had been posted on a sex website and that his phone had since “been non stop ringing.”

He went on say, somewhat incoherently: “I actually enjoy it because I start talking about jesus n pasteing versuses from the bible…..instant application unsuccessful……mostly homosexuals…..

“U know every one is always like gay pride this n that…… Let me tell u all they up to is sleeping with randoms n neone ……. NOW I KNOW why the ignorant rumour.. yet I can understand how the rumour ‘gay men spread HIV’ started…… As I say up your standards n drop ur averages. MY self worth is abit high for me to be promiscuous……. If sex was that easy what would there be to look forward to…….some people are disgusting,” said Nayanah.

He also commented that, “God made adam and eve not adam and steve.”

When Naufal Khan, Editor-in-Chief of the Indian community website Indianspice.co.za, called out Nayanah for his homophobic comments, the bodybuilder was defiantly unrepentant.

He went on post: “Naufal I actually did believe that gay men are just normal people at first but as I met a lot n and mean a lot from work… bru who are kidding you guys will let ne one penertrate or vise versa with u… u a man n attracted to a man… I personally think is a physcological matter… 1 more word there’s too kinds of women or I should gays men aswell… one that hate ANAL and LIARS!!! don’t bullshit urself by sayin u enjoy it… you need jesus. deleted urself n ne gay person on my fb here by chance offended can delte urself too…” 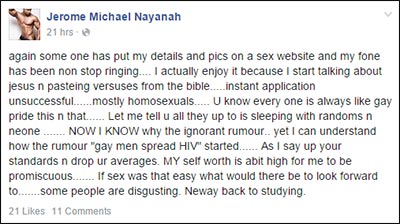 He concluded with: “You people are really sexually sick perverts!!!”

In a Facebook message, Mambaonline asked the businessman, who has a penchant for posting near-naked pictures of himself, if he was not concerned that his bigoted views could damage his business. We also queried if he was aware that he could be reported for possible hate speech.

Nayanah did not respond to our questions, although he went on to delete the posts which we had already screen-grabbed.

Khan told Mambaonline that he had intended to profile Nayanah on his website until he saw the bigoted comments. “I could not just sit back and let this slide,” Khan said. “The idea that straight individuals who possess the opportunity to slam and stereotype the LGBTiQ community in a wide audience of this nature is not acceptable.

“Who is Jerome to define a myth as being the truth, that which perpetuates more hate crimes against our community. The matter of fact is that what he did say is a hate crime. And I will be damned if we let people like him to stereotype us,” Khan insisted. “The concept that we encourage HIV infection through casual M2M interaction is a false statement.” 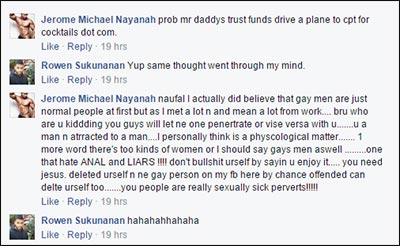 Khan argued that, “As a business man Jerome should have taken into account his clients could be gay and this stance of his clearly indicates the potential harm that those clients could face in his gym.”

He further noted that, “The gay Desi identity is still a clouded topic in Indian culture and there are few who will take the step forward to put an end to abuse like the one he put.

“Honestly who died and made him God. He needs to apologise to the LGBTiQ community,” added Khan.