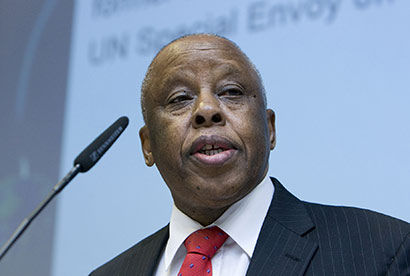 Festus Mogae, the former president of Botswana, says that African leaders who refuse to acknowledge LGBT rights are “selfish” and have the “wrong mentality.”

Mogae, who was head of the country from 1998 to 2008, spoke about the issue in an interview with Africa Renewal.

He said that Africans must move with the times and be open to new ideas.

“Leadership is not always about you, it is about people and often circumstances,” he argued, specifically referring to Zimbabwe’s homophobic president, Robert Mugabe.

Mogae commented that, “One of the challenges we have in Africa is that even the traditional leaders or chiefs are against LGBT groups.”

Nevertheless, he said he believes that LGBT rights will “slowly” start to be respected in Africa, where 37 countries outlaw homosexuality.

The interview comes as Botswana’s LGBT rights group is fighting to be recognised by the country’s government. On Friday, it appeared in the Court of Appeal to defend its constitutional right to exist as a legal entity.

Below is an excerpt from Mogae’s interview.

Africa Renewal: Let us start with the rights of lesbian, gay, bisexual and transgender (LGBT) people. Some African leaders are of the view that gay rights are un-African. They applauded Zimbabwean President Robert Mugabe when he declared at the UN 70th General Assembly that Africans were not gay. As an advocate for LGBT rights, what is your view on Africa and human rights?

Fetus Mogae: It’s not surprising that we appear to be speaking from different corners of the mouth. Differences in opinion are welcome. While I admit that the West often push their agendas on Africa, which we must be wary of, I also believe that we must, as Africans, admit that the world is changing and we must move with the times. This means often abandoning some of our long-held convictions about life, if the need arises. In my long interaction with LGBT groups and extensive research, I have come to the realisation that we are limited in our knowledge and must be open to new discoveries. I have been converted; I used to hold the same beliefs as my counterparts. President Mugabe has said that he hates homosexuals and is on record as saying they are worse than pigs and dogs. That is still his position. Leadership is not always about you, it is about people and often circumstances. I call upon African leaders to open up to second generation rights.

You have on several occasions clashed with Botswana’s current leadership and religious organisations due to your persistent advocacy to decriminalise LGBT practices in Botswana. How has it been?

Obviously not easy, but when you believe in something, nothing should stop you. Botswana inherited a law that outlaws is against homosexuality. We have not repealed it, but generally we have not harassed or arrested these groups (gays and lesbians). But the international community would say it is not enough to say you haven’t made any arrests because if you have such a law, you or another leader may wake up the next day and apply its provisions. Our argument as a country has always been that we haven’t imprisoned any member of these specific groups.

Are you hopeful that LGBT rights will be respected in the near future in Africa?

Yes, some countries like South Africa have already paved the way and others are following slowly. Change takes time and often meets resistance in some quarters. One of the challenges we have in Africa is that even the traditional leaders or chiefs are against LGBT groups. I once participated in a debate organised by the BBC. Traditional leaders argued that they didn’t like homosexuals because young people will follow their ways. They said they wanted their children to get married, give birth and keep family names alive and bring bride prices, amongst many other benefits. I found this to be selfish and a wrong mentality towards LGBT rights.