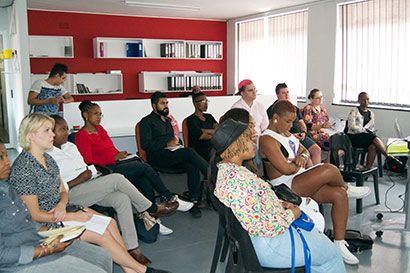 The launch of PAI’s Regional LGBTI Conference on Friday

The African chapter of the International Lesbian, Gay, Bisexual, Trans and Intersex Association (ILGA) has revealed that the third Pan Africa ILGA Regional Conference (PAI 2016) will be held in Johannesburg in May.

It was announced at a launch in the city on Friday that the event will be themed, “Breaking Ground and Building Bridges,” and is being hosted by the group Iranti-Org.

It’s expected that 175 delegates from member organisations and allies will gather to discuss a common regional strategy to achieve change in policies discriminating against people on the basis of sexual orientation and gender identity.

The meeting will also see delegates reviewing and considering amendments to the International Pan Africa ILGA constitution as well as exchanging best practices and sharing successes and opportunities for effective advocacy on the continent.

“By holding a conference, open both to member organisations and to allies, PAI wants to draw attention to the importance of a regional, membership based and democratically organised LGBTI organisation as the best platform for all African LGBTI groups to coordinate their activities,” said Latheem Nair Gabriels, PAI Communications Officer, in a statement.

The last PAI conference was held in April 2014 in Nairobi, Kenya and brought together 100 delegates. Homosexuality is currently criminalised in 37 countries in Africa.

For more information on PAI 2016 contact Gabriels on latheem@panafricailga.org.