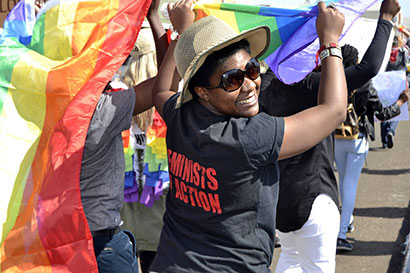 The Namibian coastal city of Swakopmund marked its first LGBT Pride last weekend, only the second such event in the country’s history.

Around 150 people turned out for the inaugural Swakop Pride, described as “a celebration of the LGBT and queer community,” on Saturday the 4th of June.

The event included a festive midday procession through the city’s main street in which enthusiastic participants waved rainbow flags, while others hung out of cars decorated with colourful balloons.

The march was followed by a gathering at the amphitheatre, where members of the community were able to mingle and listen to talks by human rights activists, and by an afterparty.

Florence Khaxas, one of the organisers of Swakop Pride, told Mambaonine that the event aimed to create “a political and social space for the LGBT community in Namibia and to start a conversation as to the ways we organise ourselves”. 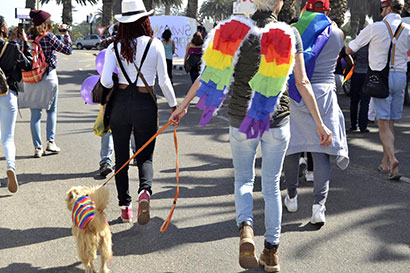 She explained that, “having a movement such as a Pride connects the LGBT community to participate in the dialogue to celebrate our diversity, create visibility and to become active citizens advocating human rights of all citizens.”

Khaxas said she was “very happy” with the outcome of the Pride, which was approved by the authorities and highlighted in the local newspaper, adding that there are plans to hold the event annually.

While consensual “sodomy” is illegal and could technically be used to prosecute gay men, this is not believed to have happened since Namibia’s independence in 1990.

The county’s citizens are said to be among the most tolerant of gay people in Africa. A recent study found that 55% of Namibians would like or would not mind having homosexual neighbours, the fourth highest pro-gay sentiment on the continent.
According to Khaxas, the most pressing issues facing LGBT Namibians include repealing the sodomy law and enacting comprehensive anti-discrimination laws on the grounds of sexual orientation and gender identity. 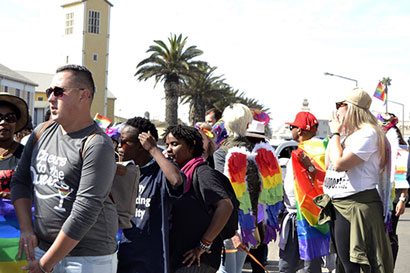 Despite some degree of tolerance, she noted that many comments from the public in newspapers and on social media “were hateful” and based on biblical condemnations of homosexuality.

“It just shows that as human rights defenders, government and civil society we have a lot of work ahead of us in terms of community dialogue on the fundamental human rights of all Namibians,” said Khaxas.