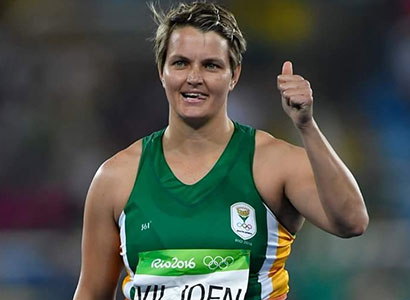 The 32-year-old, who is a survivor of homophobic abuse, scored a silver in the women’s javelin throw, with a distance of 64.92m.

She was beaten to the gold by Croatia’s Sara Kolak (a throw of 66.18m). Barbora Spotakova of the Czech Republic came third (64.80m).

Viljoen’s win is also the first for a South African woman at the Rio Games and increases the country’s medal tally to nine.

It’s furthermore a major personal victory following her disappointment in 2012 at the London Olympics when she narrowly failed to take home a medal.

The South African Government congratulated Viljoen on her silver medal, tweeting: “Dankie!”, while the Minister of Sport, Fikile Mbalula, said that she had “made the country proud”.

There are believed to be only two openly-LGBT African Olympians in 2016; Viljoen and runner Caster Semenya, both from South Africa.

Viljoen came out in 2013 on Facebook after revealing that she had been ostracised by many of her friends and family when she fell in love with a woman.

She wrote at the time that she “suspected the choice I made would be a difficult road, but not in my wildest dreams did I ever thought it would be such an uphill battle”.

In July, just a month before the Games, Viljoen claimed on Facebook that her brother had “slapped me through the face,” apparently because of her relationship with partner LiMari Louw.

“I’m speaking out for every person out there who is being broken emotionally or physically over who they love,” she said. “I will fight for you till my hands are stubs and dedicate my Olympic year to you.”

Viljoen previously won gold at the Commonwealth Games and the African Championships.

There are a record-breaking 49 (at least) openly LGBT athletes taking part in this year’s Games – the most ever recorded.

It was her first attempt that earned her the #silver medal.
Well done, @Sunette_Viljoen !#teamSArise https://t.co/LEaPcVzRBu