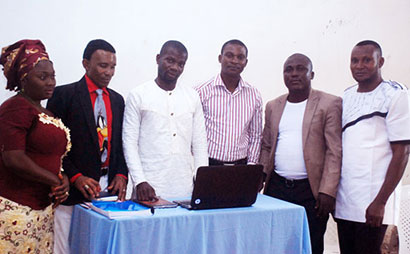 An American anti-LGBT organisation has opened a branch in Nigeria in a bid to fight “the homosexual agenda in Africa”.

Founded by rightwing activist Brian Camenker, MassResistance is listed as a hate group in the US. It describes itself as “a pro-family activist organisation that educates people to help them confront the attacks on the traditional family, children, religion, and society”.

The Massachusetts-based group believes that homosexuality is linked to paedophilia and bestiality and has opposed LGBT youth anti-bullying and suicide prevention programmes, describing these as effort to “lure children into homosexuality”.

According to the group, the Nigerian branch is being headed by Dominic Idio, a local anti-LGBT radical. The first Nigeria MassResistance meeting was held in August. It has been registered as a Civil Society Organisation and there are plans to open an office in Abuja.

“Here in the US, the church’s influence on the ‘culture war’ is breaking down and has caused considerable confusion,” said MassResistance. “But the Africans are VERY clear-headed on these issues. They get it. In countries such as Nigeria, Uganda, Kenya, people are very aware of the destruction that widespread homosexual behaviour brings to society and especially to children.”

Alarmingly, MassResistance said that it is working with people in a number of other countries to “confront these radical agendas”.

US hate groups and evangelists have played a major role in influencing African leaders to crack down on LGBT equality on the continent. Scott Lively, a US evangelist, is currently facing charges in America of crimes against humanity for his role in fuelling anti-LGBT fervour and inspiring homophobic legislation in Uganda.

Nigeria already has some of the most repressive anti-LGBT legislation in the world. A 2014 federal law prohibits same-sex marriages and relationships with a penalty of up to 14 years in prison and stipulates 10 years in jail for public displays of same-sex affection as well as 10 years for membership or support of LGBT groups.

Under older colonial-era legislation, anyone found guilty of engaging in homosexual acts can also be jailed for 14 years.

A petition has been set up “to help let MassResistance know their exported hate isn’t welcome in Nigeria”.