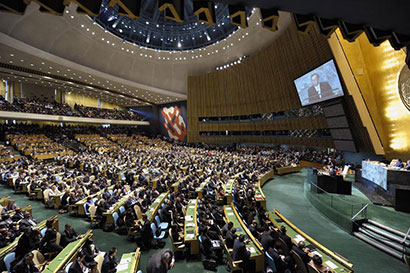 Earlier this week, human rights groups expressed alarm at reports that the Africa Group at the UN had issued a statement and planned a UN General Assembly resolution to reverse the UN Human Rights Council decision to create the groundbreaking position.

Even more disturbing was the claim that South Africa had signed onto the statement and would, by implication, vote against the Independent Expert on Protection against Violence and Discrimination Based on Sexual Orientation and Gender Identity, named in September as international law professor Vitit Muntarbhorn.

Speaking to Mambaonline on Friday, Department of International Relations and Co-operation spokesperson Clayson Monyela, strongly denied the reports and said that the country would in fact vote against attempts to block the Expert.

Monyela said the department was “surprised” at the claims. “We don’t know what the basis of those statements are. We never issued any statement or said anything suggesting that we were going to support this call by the Africa Group.”

Monyela also went on to deny that South Africa had signed any letter or statement by the Africa Group on the matter. “South Africa hasn’t signed anything like that. We wouldn’t have signed it anyway because we are not in support of this intention to reverse the role [of the Independent Expert],” he told Mambaonline.

“Where is this letter that everyone keeps talking about? Can someone produce it?” he asked. “The long and short of it is that it’s not true and when that matter comes to a vote we will be voting against the Africa Group which, as you know, on this matter, a lot of African countries don’t see eye to eye with us.

“We have a constitution that unfortunately some of them don’t have and we cannot on any multilateral forum go against what our constitution says. And we’ll stick to that because we believe in that.

“Our diplomats cannot vote in a way that is contrary to the letter and spirit of our constitution. If that means voting against the Africa group to which we belong, that is exactly what we will do,” Monyela said.

Despite this laudable and welcome statement, in June, South Africa shocked the world when it abstained in the landmark vote at the UN Human Rights Council to appoint the global LGBTI watchdog.

It remains unclear when the new vote on a resolution to suspend the Independent Expert will take place at the UN, although there were reports that it was set to be held  this week.