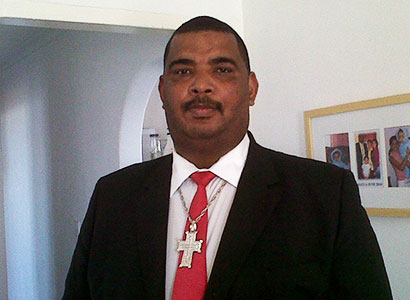 Cape Town’s homophobic Pastor Oscar Bougardt is threatening to sue media outlets over comments he was reported to have made asserting that most paedophiles are gay.

At the end of December, News24 quoted Bougardt as claiming that, “Ninety-nine percent of paedophiles stem from homosexuality” and that it is “proven that 99% of the paedophiles have a homosexual background”.

He was further quoted as saying that gay people are a grave danger to children.

The comments were in turn reported by Mambaonline and GaySA Radio, both of which pointed out that the claims are completely inaccurate and only serve to further perpetuate stigma against LGBT people.

GaySA Radio also provided the cleric with an opportunity to present his evidence for these claims, which he chose not to do.

Bougardt then complained that he had been misquoted. News24 agreed that a sentence in its story incorrectly stated that he’d said that 99% of homosexuals are paedophiles.

The site corrected the article and apologised for the mistake (which should have read that he’d said that 99% of paedophiles are homosexual, not the other way around) but otherwise stood by his full quotes included in its stories. (Neither Mambaonline nor GaySA Radio featured the incorrect sentence).

News24 journalist Jenni Evans and the site’s news editor, Ahmed Areff, insist that Bougardt’s quotes are accurate and were recorded in an interview. To be clear, according to the site, the substance of Bougardt’s comments was accurately reported.

Bougardt, however, has continued to demand that the articles be retracted and for further apologies to be made. “As a result of this story my family and I had to endure abusive calls from homosexual community,” he complained in an email.

News24, Mambaonline and GaySA Radio have repeatedly asked Bougardt to clarify how he was misquoted, what he meant to say and if he wished to retract or elaborate on the comments. He was further invited to appear on GaySA Radio to offer “his side of the story,” which he refused to do.

The pastor, who said in an email that “it is almost like there are some type of conspiracy to persecute me,” has not responded to our questions and instead wrote:

“As for News24 they think that correcting/editing the article is good enough for me, they are seriously mistaken as I am seeking legal assistance how to pursue this matter. My family and I was verbally abused, insulted and even threaten after the broadcast and publication of this story. Until this matter is publically rectified by Mambaonline, GaySa Radio please do not bother to call me for any interview because I will not speak to you guys. As for News24 my attorney will be lodging a complaint with the Ombudsman and also seek damages. I am really fed up with media and even radio broadcasting stories without my side of story.”

Bougardt has a long history of making dangerous and bigoted statements about gay people. In a hate speech case settlement order signed in August 2014 after he was taken to the Equality Court by the SA Human Rights Commission, Bougardt was “interdicted from publishing statements that are discriminatory or incite hatred or harm on the grounds of sexual orientation”.

He has repeatedly contravened the order and has continued to make anti-LGBT statements on various platform and social media. Bougardt recently visited banned anti-gay pastor Steven Anderson in the US, for whom he has expressed his admiration and support, and has promised to open local branches of the American preacher’s hate church in South Africa.

You can read some of Bougardt’s homophobic posts and comments here. You can also file a complaint with the SA Human Rights Commission against the pastor here.