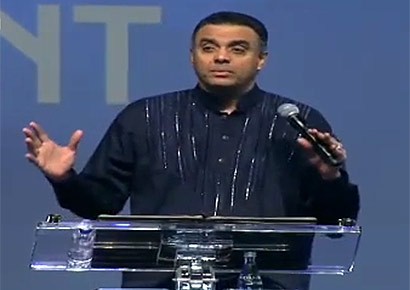 The Grace Bible Church in Soweto became a trending topic on Twitter after an outraged Somizi Mhlongo walked out of a homophobic sermon on Sunday.

The Idols judge posted a video on his social media platforms in which he expressed his anger at experiencing the religious bigotry on display at the popular church.

“I’ve just walked out… stopped out of church because some guest pastor from somewhere in Africa decided to take a turn and speak about homosexuality and how sinful and disgusting and how not even animals practice that… and blahh, blahh… And the church is cheering…” fumed Mhlongo.

“And I’m actually disappointed at all the gay men and women that sat there and listened to him offending us and didn’t do anything about it. I walked out – and visibly so! And I’m proud and I’m going to remain gay for the rest of my life!”

The subject of Mhlongo’s ire was Evangelist Dag Heward-Mills from Ghana, founder and Presiding Bishop of the Lighthouse Chapel International.

In his guest sermon at the church on Sunday, Heward-Mills spoke to the large crowd on the topic of “Why your soul is important”.

In the somewhat confused sermon he talked about natural urges and how without a “strong or developed” soul one “cannot control your flesh,” before condemning homosexuality as unnatural.

“There’s nothing like that in nature. It’s unnatural,” he insisted, as the audience again clapped and cheered in support.

After Mhlongo shared his video, the hashtag “GraceBibleChurch” started trending on Twitter in South Africa, becoming the second most discussed topic in the country and leading to a heated debate on social media.

“LeboGugu wrote: “So disappointed. This is what drives people away from Christ.” All Things African tweeted: “This is why I don’t ever go 2 church, discrimination double standards, hypocrisy, everything…” while Oliver Meth added: “It is irresponsible to used the pulpit as a platform to spew hate & ostracize a subset of God’s children.”

The minister’s words were, however, strongly defended by those who argued that he was simply expressing religious truths. “Bible can’t be amended like our constitution, how long shall we compromise the word of God for our constitution,” said #SJBFest28Jan. 1 Million also asked: “y’all are saying a pastor or preacher must cut out Bible verses to accommodate people’s feelings??”

Some pointed out that while Heward-Mills might consider himself an expert on the subject of the Bible, he should stay away from making unfounded scientific claims. Homosexuality in nature has been widely observed and same-sex attraction has been documented in over 1,500 species.

Headed by Bishop Mosa Sono, the Grace Bible Church is said to have a considerable gay following, including a number of celebrities like Mhlongo and fashion designer David Tlale.

@somizi walking out of church while Pastor is insulting LGBTIQ people, has done it for all marginalized. #lgbt #lgbtrights #gracebiblechurch pic.twitter.com/Pb2LLpnTC6

Watch Dag Heward-Mills’ sermon below. His anti-gay comments can be found at around 58.40 minutes into the sermon.