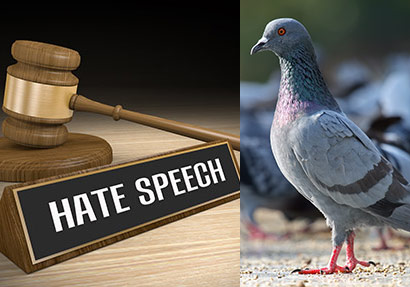 An LGBT hate speech case in the Equality Court in Johannesburg has become bogged down in details about the safety of pigeons, leading activists to question the efficacy of the system.

Jones claims that in a verbal dispute in July over allowing a contractor to protect their Killarney apartment complex from roosting pigeons, Oelofse called him a “fucking old queen,” among a host of other alleged insults.

Jones said that the slur “was based on my identity as a gay male… and aimed to mock me on the basis of my sexuality”.

The case, which should be a relatively simple one, has now dragged on for months. The latest hearings took place this past Monday and Tuesday, and the matter is still not resolved. Oelofse has neither denied nor admitted making the statements but has brought a lawyer to court, forcing Jones to do the same.

Activists are concerned that the magistrate has allowed Oelofse’s legal representative to present arguments on her concerns about the pigeons and their safety, instead of focusing on what was said or not said by her.

Virginia Magwaza, Advocacy & Campaigns Officer at The Other Foundation, expressed her deep frustration after attending the hearings in November as well as the latest court dates.

“This court is expected to establish and rule on the issue involving homophobic utterances that were directed to the complainant,” she said. Magwaza claims, however, that the magistrate has instead “allowed the defendant’s attorney to go on and on about issues that are irrelevant in the matter” and that should be addressed in another court of law.

Magwaza also accused the defendant’s lawyer of “dragging this case out so that the complainant gives up and the matter ends unresolved”.

She argues that while the Department of Justice, through its involvement in the National Task Team to address violence and discrimination against LGBTI people, has consistently encouraged the use of the Equality Courts, this case is making a mockery of the system.

The Equality Court has been presented as any easy to use and low cost means for victims to enforce the Equality Act, but Jones’ experience indicates otherwise. In addition to the costs of legal representation and the days spent in court, the ongoing emotional stress saw him briefly hospitalised in November.

“This experience shows clearly that using the Equality Court is not as easy as it is promoted and the magistrate presiding in this case needs more information on the Equality Act in order to be able to direct the proceedings,” Magwaza said.

Activist Boitumelo Sepotokele, who attended one of the hearings this week, also questioned the accessibility of the Equality Court for those without means, describing it as costly and time consuming.

“I can’t help but wonder if I, a black queer bodied individual, or anyone who wishes to use the court, is able to access the court and be able to afford it,” she said.

Jones is asking for R50,000 in compensation and an apology from Oelofse. The money, should it be awarded, would be donated to the gender equality NGO, Sonke Gender Justice.

The case will resume on March 14. For more information about using the Equality Court, visit www.justice.gov.za/EQCact/eqc_main.html.