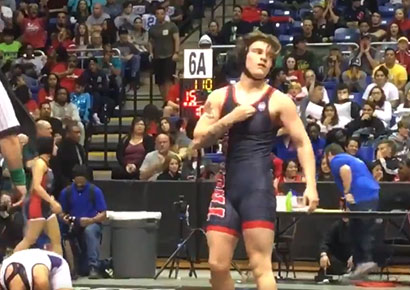 Mack Beggs, an 18-year-old transgender male wrestler who’s been barred from fighting other boys, was booed by a crowd when he won a match.

On Saturday, Beggs won the Texas girls 6A wrestling championship in the 110-pound weight class. It’s the second year in a row that he’s scooped the title.

After he beat Chelsea Sanchez, the crowd responded with waves of cheers and shameful boos. The high school student remained defiant by tapping his chest and turning around to face the antagonisers.

Critics have lambasted Beggs for unfairly competing against girls because he is on testosterone medication for his transitioning.

However, Beggs – who wants to compete against boys – has no choice. Under Texas state athletic rules he is only allowed to compete in the league for the gender he was assigned to at birth.

The predicament puts him the firing line on two fronts; being discriminated against for being a transgender male and also attacked for being forced to compete against women.

“But what can I tell people? I can tell the state Legislature to change the policy, but I can’t tell them to change it right now. All I can hope for is that they come to their [senses] and realise this is stupid and we should change the policies to conform to other people in my position,” explained the young man. 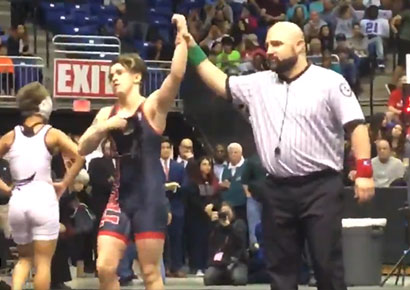 “It’s an impossible choice,” Hudson Taylor, executive director of Athlete Ally, told The Daily Beast last year. “Either he competes against girls and is vilified by the parents of those girls — and by whoever isn’t educated on trans issues — or he chooses not to play sports. There is no other opportunity for him.”

When asked about his reaction to the boos, Beggs said: “They’re saying ‘steroids.’ They’re saying, ‘Oh, they’re beating up on girls,’

“It just comes down to technique and who has the most heart. I put too much blood, sweat and tears, I put too much B.S. into this journey that I wanted to come out on top.

End of Mack Beggs title match was chaos. Had huge lead, nearly got pinned, then came the crescendo of cheers/boos. pic.twitter.com/FrLixVsTAj