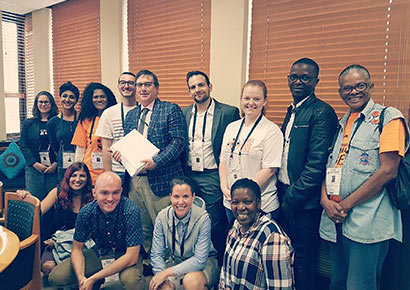 Deputy Minister John Jeffery receives a petition from the HCWG

After a decade of campaigning by LGBTQ activists, South Africa’s Hate Crimes Bill is finally on its way to becoming law.

On Wednesday (14 March), the Department of Justice announced that the Prevention and combating of Hate Crimes and Hate Speech Bill had been approved by Cabinet.

The Bill, which criminalises both hate crimes and hate speech, will be introduced into Parliament shortly, where after it will go through the normal parliamentary legislative process.

In a statement, Deputy Minister of Justice Justice and Constitutional Development John Jeffery highlighted the Bill’s intention to eradicate racism but added that he was confident that once it was passed, it “will contribute to eradicating not only racism, but all forms of discrimination, in our country”.

The announcement follows the submission of a petition to the department, created by the Hates Crimes Working Group (HCWG) and AllOut, with 21,519 signatures, calling for the Bill to be moved forward.

In a recently released report, the HCWG found that the LGBTQ community was among the most vulnerable to hate crimes.

The ministry addressed criticism by LGBTQ activists and the HCWG that the Bill, which was first introduced in October 2016, had been delayed.

“The Bill was not delayed,” insisted the Department of Justice. “There can be no dispute that the Bill is complex and sensitive in nature, requiring careful consideration which, in turn, takes time.

“After the Bill was published in the Gazette for comments, some 75,854 submissions were received from institutions and individuals.”

The department explained that due to the many submissions and dialogue that arose from the draft Bill’s publishing, “further research” and “further engagements with certain stakeholders” was required.

The department said that, as a result, the revised Bill that was approved by Cabinet is considerably different from the earlier Bill that was made available for public comments.

The provisions dealing with, in particular hate speech, have been significantly changed, said the department. The qualifying criteria for hate speech must now include a clear intention to be harmful or to incite harm or promote or propagate hatred “on the basis of age, albinism, birth, colour, culture, disability, ethnic or social origin, gender or gender identity, HIV status, language, nationality, migrant or refugee status, race, religion, or sex, which includes intersex or sexual orientation”.

The revised Bill also specifically excludes “anything done in good faith in the course of engagement in any bona fide artistic creativity, performance or other form of expression, academic or scientific inquiry or fair and accurate reporting or commentary in the public interest, in so far as it does not advocate hatred that constitutes incitement to cause harm, from the ambit of hate speech.”

The latest version of the Hate Crimes Bill will only be publicly released when it is introduced into Parliament.