The Psychological Society of South Africa (PsySSA) has published the country’s first guidelines to help psychologists work with sexually and gender diverse people.

The organisation launched the landmark 84-page booklet, an LGBTQ best practice manual for mental health professionals, at a function in Johannesburg on Thursday.

The PsySSA is the professional body representing psychology professionals in South Africa and the document represents the group’s official stance on sexual and gender diversity.

“The guidelines provide an accessible tool for those in the helping professions to equip themselves and grow their confidence in working with sexual and gender diversity in an affirmative and relevant way”, said Prof Juan Nel, research professor at UNISA and co-author of the guidelines.

The guidelines aim to increase psychological knowledge of human diversity in sexual orientation, gender identity, gender expression and sex characteristics, and to facilitate the application of this knowledge amongst psychology professionals.

The booklet is a reference to give psychologists insights not only into LGBTQ realities but also into their own preconceptions and attitudes around sexuality and gender identity, which in turn affect the way they deal with their clients. The authors said they endeavored to ensure that the guidelines are based, as much as possible, on local research and experience.

Importantly, the guidelines make it clear that being LGBTQ is not in any way an illness or a pathology and that clients should not be treated as if they are suffering from such. Instead, explain the authors, many of the challenges that LGBTQ clients face are due to the unfriendly, alienating and discriminatory society they live in – known as “minority stress”.

The publication aims to help mental health professionals better understand these pressures. One of the chapters, for example, looks at non-confirming family structures and relationships, outlining the stresses faced by gender diverse parents, including issues such as raising children and adoption. There is a strong focus on gender identity and understanding the psychological and practical realities facing transgender and gender non-conforming people.

The booklet also addresses the contentious issue of conversion or reparative therapy, which attempts to change the sexual orientation or gender identity of individuals. The practice has been banned in some states in the US and in Malta.

The guidelines state that “same-sex orientation cannot be changed by reparative or conversion therapy” and that the practice is “dangerous and in conflict with medical ethics.” The publication notes that it is “harmful for adults, but it is particularly harmful when offered to or forced onto children and adolescents.”

Cornelius Victor, co-author of the guidelines, said that as conversion therapy is an unproven and unethical technique it cannot be used by registered psychologists. 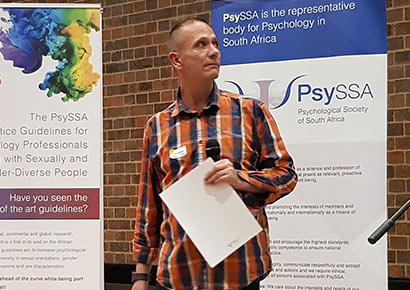 “If you are a clinical psychologist doing conversion or reparative therapy you could be taken to the HSPCA (Health Professions Council of South Africa) and disbarred,” he told Mambaonline. Victor noted that, as indicated in the guidelines, PsySSA has “a very strong position against the practice”. He recommended that anyone “who is aware of a registered health professional who is doing it… to contact the HSPCA and lay a complaint.” He added: “They deserve to be disbarred.”

The launch was attended by psychologists, academics and LGBTQ and gender activists who warmly welcomed the guidelines. Many called for the publication to be used as a tool by all those who play a role in shaping people’s lives, from religious counselors to teachers. The need to bring the guidelines into the rural areas, where LGBTQ people face some of the worst stigma, was also highlighted by members of the audience.

Prof Nel said that while it would be presumptions to impose the guidelines onto other professions, the publication could well be useful to anyone who provides guidance and support to the community. He also expressed hope that the document will make a positive impact elsewhere in Africa.