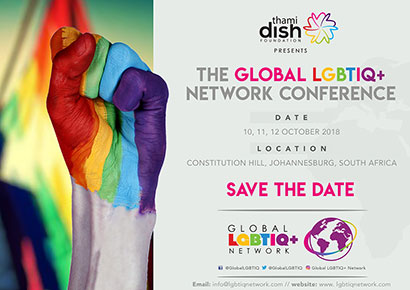 Save the date! Details of a new groundbreaking international LGBTIQ+ conference that will take place in Johannesburg, South Africa later this year have been announced.

The event, hosted by the Global LGBTIQ+ Network, will take place from from 10 to 12 October 2018. The Global Network, which was launched in 2017, is an initiative of the Thami Dish Foundation.

The event aims to become a gathering of LGBTIQ+ communities, organisations and entrepreneurs from all over the globe.The conference will operate under the theme ‘Building a common voice for the world’s LGBTIQ communities’.

The event, a first of its kind on the continent and in South Africa, will bring like minded individuals to Johannesburg in an effort to address issues around homophobia, media representation, health and legislation concerning the LGBTIQ community, amongst other topics.

The ultimate outcome of this gathering is to establish a global movement that will address these issues collectively going forward, said the organisers. They see the conference as a platform to network, explore synergies around various forms of activism, encourage expression, boost the pink economy and unearth growth opportunities. The network will also feature talks by local and international speakers who are active thought leaders on LGBTIQ matters.

The creation of the Global LGBTIQ+ Network is a project of the Thami Dish Foundation, an LGBTIQ+ focused NPO geared towards educating societies, providing opportunities for LGBTIQ+ youth and creating healthy and inclusive communities. The network will be a platform to link NGOs, LGBTIQ+ affinity groups, LGBTIQ+ activists, corporates and governments in a bid to form partnerships that benefit the global community and encourage diversity.

At the launch of the Network, held on International Coming Out Day, 11 October 2017, Chairperson of the Thami Dish Foundation, Thami Kotlolo said: “My vision has always been to create platforms that advance the protection, promotion and visibility of LGBTIQ+ people, identities and communities. We want this network to unite the world’s LGBTIQ+ community. We should speak with one voice and show that we are powerful if we work together. This network is a space created by LGBTIQ+ groups for the benefit of communities globally to engage, learn and grow.”

The October conference will feature global LGBTIQ icons, celebrities and activists as well as politicians from South Africa and other parts of the world where homosexuality and other rights of the LGBTIQ are guaranteed and protected. The programmes for the conference will feature plenary sessions, dialogue sessions, an exhibition as well as arts and culture activities. A public call for abstracts will be announced on the network’s platforms, which will be directed at delegates.

“As we honour the 20th Anniversary of Simon Nkoli’s death, the centenary of Nelson Mandela and as we continue to honour Mama Winnie Mandela, we heed the call to prioritise the rights of marginalised communities, in this case LGBTIQ people,” said Jay Matlou, Head of Programmes for the Thami Dish Foundation.

“This conference is only but one way to do so, to drive the conversation and build a unified and global movement. We look forward to hosting our international and local delegates in this historic conference,” he added.

The conference will be hosted at the Constitution Hill from 10 till 12 October. Delegates can register on the website www.lgbtiqnetwork.com where updates will be made available in the run-up to the event.