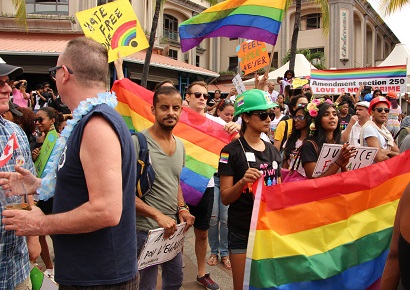 Despite the cancellation of the 13th annual Mauritius Pride march following death threats from anti-LGBTI protesters, Mauritians still went on to celebrate pride this past weekend.

State police informed the event organisers, Collectif Arc-en-Ciel (CAEC),  that they could not protect parade attendees after anti-LGBTI protesters illegally gathered along the parade route.

The protesters claimed that Mauritius Pride was immoral and anti-Islamic. It was also reported that some were carrying weapons.

However, despite the violent threats and cancellation of the parade, a group of Mauritians still held a pride event at the Caudan Waterfront in Port Louis to mark international Pride month.

Speaking to Mambaonline, Carou Labonne from Collectif Arc-en-Ciel said that more than 500 people showed up to the Mauritius Pride event. “Some islands were invited to join our pride [including] the Seychelles and Madagascar.”

Labonne explained that because of the death threats, the organisers decided to have a sit-in pride instead of a march, for the safety of those who attended. “We wanted to focus on what LGBTI actually is; humans trying to be humans with love, respect and happiness,” Labonne added.

Much loved Mauritian-born Lilliane Burnett was invited to be the godmother of the pride and she attended with her son, Richard (Bugs) Burnett, a prominent gay journalist in Canada. Days after the event took place, Labonne said that the organisers were still receiving death threats from anti-LGBTI protesters.

Prime Minister Pravind Jugnauth and the police commissioner had earlier given their full support for the pride march. According to France24, Jugnauth condemned the anti-gay protest, arguing that “the rule of law must prevail and authorities will do what is necessary following this unacceptable and illegal demonstration. ”

The Catholic Church on the island also spoke out for the rights of LGBTI people to gather peacefully. “Regardless of one’s moral beliefs about homosexuality, we would like to express our indignation at the way a LGBT parade that had police permission was obstructed by illegal protesters,” commented Cardinal Maurice Piat, Bishop of Port Louis, in a statement.

The Mauritian LGBTI community is protected from discrimination by law, however, sodomy and oral sex are deemed illegal and carry a jail term of up to five years.

CAEC has launched a petition, calling for people who are advocating for LGBTI rights and peace in Mauritius, to sign it. You can find the petition here.