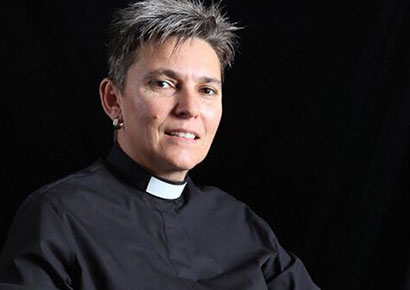 After a titanic seven year struggle, Ecclesia de Lange has ended her legal battle to have the Methodist Church of South Africa (MCSA) reinstate her as a minister.

De Lange was fired by the church in January 2010 after she announced to her Western Cape congregation that she would be marrying her same-sex partner (the couple has since divorced and De Lange has remarried).

Fired simply because she legally married another woman, De Lange fought to get her job back. She engaged in internal arbitration with MCSA, which she believed was biased, and then turned to the courts, who kept sending the case back to church arbitration.

Eventually, in 2015, the Constitutional Court disappointingly also refused to rule on the case. Reticent to take a stand on the matter, the highest court in the land repeated that “arbitration would be the ideal forum for Ms De Lange and the Church to see where the balance between dogma and tolerance should be struck…”

Convinced that the church’s internal arbitration was biased against her, De Lange decided to take her case to both the Equality Court and the Labour Court. But then, late last year, she changed her mind.

De Lange approached the MCSA under the belief that dialogue would be more productive than ongoing court cases. She sought to find a way in which both parties could release a joint statement announcing the end of her litigation and expressing their commitment to continuing the conversation together.

Despite a positive start, De Lange says the process fell apart and the church declined to commit to the joint statement. Last week, she released her own separate statement (published at the end of this article).

MambaOnline spoke to de Lange – who is now Director of Inclusive & Affirming Ministries (IAM) – about her pain and disappointment, what prompted her decision and where things now stand with her former denominational home.

MambaOnline: You decided not to continue with the litigation, when was that?

De Lange: It must have been in August last year. In fact, I submitted all the papers to the Labour Court and Equality Court. Then after consulting with my legal team, I decided to withdraw it. I then informed the church and asked to have a conversation. In October I went to speak to the Bishop and the general secretary.

And how did that go?

I thought it was positive. They were relieved that I was no longer continuing with the litigation. My desire was we bring out a combined statement. It wasn’t for them to accept me back into the church, but rather to find a way forward by building a bridge between LGBTI people who are of the Christian faith and the church.

You had the expectation of a joint statement?

They were meant to send me a statement by December last year. I hadn’t heard anything from them until February this year. I then proposed a draft statement because I was under the presumption that they were busy with other stuff. Then they told me that they can’t go with my statement because it was one-sided. I then said that I can’t write on behalf of them, what was in my statement was what I had wanted to say. Initially we had agreed that we would draft something, then both parties would look at it to see if we were both happy. I amended the statement again and sent it to them. Then, two weeks later, they said they decided on having their own statement, which would be separate from mine.

And when was that?

This was about in May, this year.

What would you say to people who might criticise you for giving up by withdrawing the litigation?

It wasn’t an easy decision to make. It wasn’t an overnight decision [either]. I came to a decision that I would take a different route in finding for the LGBTI community and people who want to be a part of the church. The litigation process didn’t work for me. I also had no guarantee, going forward, with the Labour and Equality courts, in terms of if there would be any relief. There hasn’t been any relief in the whole process since this started. Also not knowing which judge is going to rule on your case; is it a homophobic judge? There are many little things that you need to consider. So I don’t see myself as giving up, I see myself as taking a different route.

What kind of toll has this seven year journey taken on you?

I think it has made a holistic impact on me. I ended up divorcing the person I was married to after being fired by the church. The kind of emotional, financial and psychological turmoil was quite intense, including the social turmoil. Losing a job has an immense impact on a marriage. Being rejected by the church, in a sort of violent way, is quite intense when you have to deal with that. But through all the pain and the struggle and the losses, I have grown immensely. I wouldn’t have grown if I hadn’t gone through what I went through. 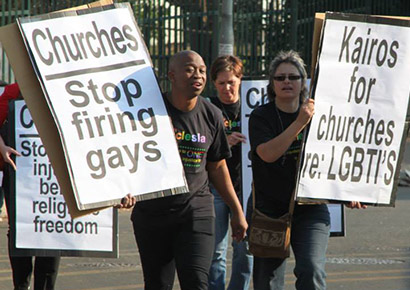 How do you feel about the Methodist Church now, and what would you like to see happen?

They’re busy having discussions [about same-sex marriage], but they are not speaking in one voice; there is a divide within the church. I would like for them to have inclusive policies, from the top right to the bottom. However, I also don’t have an expectation anymore, because I don’t want to set myself up for a big disappointment. But I hope they find a way of including all people. It’s unbelievable that a church that was in the forefront against apartheid gets stuck on this issue.

Where do you see your engagement with them going, here onwards?

If they were to ever contact me, asking for assistance, of course I would assist. I will not close my door on them. The nature of the work that I am involved in does work with churches. I am committed to this work; in helping people reconcile their sexual orientation with their faith. It’s not like I have closed the door on the Methodist Church, but I can’t do anything more than what I am. I won’t force myself onto them.

So, do you think that there is still value in people using the litigation route to try and bring about change in religious organisations?

Yes, I think there is value in that. From an academic and legal perspective, I think the route is evolving. This case will set a precedent. If great injustices have been made then I would vouch for the litigation route.

What advice would you give to someone else that might be in a similar situation; on the receiving end of religious intolerance and discrimination?

You need to take care of yourself. If you are in an abusive space where you are constantly told that you are not made in the image of God, then I would say you need to remove yourself from that space, and find ways of empowering yourself.

MambaOnline asked the Methodist Church for their statement on De Lange ending her litigation. We were provided with a communication outlining the facts of the dispute between it and De Lange. It concluded with the following terse comment:

“After seven years’ worth of conversation, church-processes as well as legal processes to the extent of the Constitutional Court, the Church’s decision is seen as the correct decision to have discontinued Rev de Lange for her action of entering into a Same Sex union. As the Church understands it, this matter is now closed.”

Below is De Lange’s statement on her dropping the litigation against the church.

Since 6 December 2009 when asking my congregation for their support of my decision to marry my partner, my journey has been one of learning, disappointment, frustration, and ultimately of hope and love.

My wish to marry a person of the same sex led to firstly my suspension as a Methodist Minister, then a finding of insubordination against me, and finally the discontinuation of my ministry in the Methodist Church of Southern Africa (MCSA). I took the matter to the High Court, the Supreme Court of Appeal and the Constitutional Court.

The courts were reluctant to get involved in matters of doctrinal interpretation, and relied on the concept of freedom of religion. Based on this position, all three courts ruled that I had to submit to the church’s internal ‘arbitration’ system, which I did, and the internal arbitration found in favour of the MCSA.

That brought me before a painful and difficult decision. The court processes thus far, had not brought any relief to me and/or other LGBTI people of faith within the MCSA. Having sought guidance, I waived the right to refer the matter to the Equality Court, and instead decided to bring an end to the litigious process, which is in essence an adversarial one.

My decision not to continue on this way, which may have led to more polarisation, was coupled with an invitation to join in conversation to the Presiding Bishop and General Secretary of the MCSA.

During our conversation in Johannesburg on 31 October 2017, both parties had the chance to express their views and understanding of the larger issue: the acceptance of LGBTI people by the MCSA. The intention was for both parties to make use of the opportunity to release a joint statement about the need to break down walls of fear, to build bridges between opposing beliefs, and to send an inclusive message to the LGBTI community. It was a setback when the MCSA decided that we would release separate statements.

However, the journey is ongoing. I therefore make this statement, as an expression of my commitment to the future. I am, and will continue to use my experience, with the hope that I can serve as a meeting place between different viewpoints, and so contribute to more effective conversations within the MCSA and relevant stakeholders. I am, and will continue to work towards removing the barriers between the church and LGBTI people of faith. It is my sincere prayer that the church will be an active participant in spreading the belief that all are equal before the eyes of God.

As far back as 1997 Archbishop Desmond wrote as a forward to Aliens in the household of God: Homosexuality and Christian faith in South Africa that if the church, after victory over apartheid, is looking for a ‘worthy moral crusade’, then this is it: ‘the fight against homophobia and heterosexism’.

If a genuine acceptance of LGBTI persons is to grow and take permanent root in South Africa, the church and religious leaders have an important role to play.

For my part, it has become my lifework to continue to stay in dialogue and fervent prayer that will lead to healing, reconciliation and inclusivity of all God’s people.

I would like to thank all who have supported me on this journey. From the bottom of my heart I thank my litigation teams: Anna-Marie de Vos, Alfred Smit, Pieter van R Coetzee, Van der Spuy & Partners, Linda Willemse, SERI, Stuart Wilson, Irene de Vos, Johan de Waal, Webber Wentzel and Odette Geldenhuys. A special thanks to Rev Dr Peter Storey, Eben Geldenhuys, Rev Kevin Needham, Inclusive and Affirming Ministries, friends, family, all the individual supporters, my loving wife Melanie Case and the Grace of God.