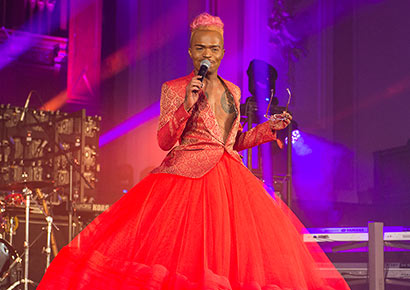 The winners of the 10th annual Feather Awards, celebrating LGBTI allies, celebrities and activists, were announced on Thursday night in Johannesburg.

The event, marking 10 years since it was first launched in an intimate Rosebank nightclub, was held in grand style at the Johannesburg City Hall.

The evening was kicked off with a spectacular medley of classic gay-themed hits, performed by an all-star lineup of divas, including Nokukhanya, Nothende, Zandi, Thembisile, Tamara Dey, Wanda Baloyi, Kelly Khumalo, Moneoa, Amstel, and KB.

Feathers veteran, Somizi Mhlongo, entertained the crowd with a stream of witty and shady comments (and eye-popping outfits, of course) throughout the night as the MC. The show also featured performances by Nhlanhla Nciza, the Mzansi Gay Choir and Zoe Modiga, coupled with incredible choreography and a dazzling stage production.

The winners’ list delivered the usual joy, surprises and laughs – from Drama Queen of the Year, AKA and the Matlapa, to bae of the moment, Michelle Mosalakae, who took home the Hot Chick of the Year, and the irrepressible Thembsie Matu, who scooped the Diva Extraordinare prize. 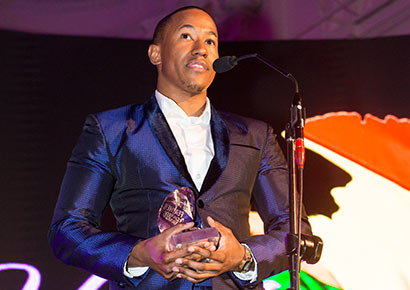 Model and actor Bohang Moeko scored the Hunk of the Year title, while Sjava was named Musician of the Year. He walked on stage with an unexpected outfit; a white dress and a cardboard box on his head pasted with images of LGBTI people who had lost their lives. He further paid tribute to LGBTI hate crime victims in his speech.

Following recent online criticism about the lack of substance to the awards, the organisers made sure to highlight the work that the foundation behind the event does throughout the year. This includes hosting a series of LGBTI community dialogues around the country and numerous LGBTI sensitisation trainings of law enforcement officers in Gauteng. The foundation this year also hosted the Global LGBTIQ+ Network Conference in October and ran a two-day LGBTI entrepreneur development event with Gauteng Enterprise Propeller, in which ten entrepreneurs were each awarded R40,000.

The award ceremony featured a surprise video in which President Cyril Ramaphosa restated his support for the rights and equality of the LGBTI community. “All our people should know that they live in a country that promotes the respect of rights, which promotes the full acceptance of how people are [and] the freedom of association that each one of us has to have,” he affirmed. 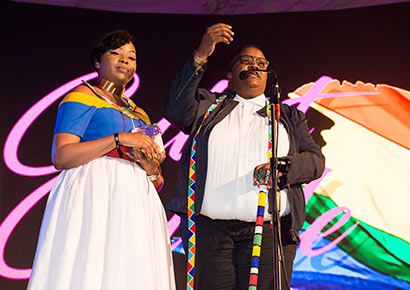 “And the LGBTI community in South Africa, as much we all have rights, is a community that still needs to be properly supported, properly positioned. Everybody in South Africa must have full recognition of the importance of all of us subscribing to the values that are set out in our Constitution, and living by them!”

GaySA Radio was named Media of the Year, based on a public poll hosted on MambaOnline.com, while Kenyan editor and LGBTI activist Denis Nzioka was awarded the African Feather of the Year prize. LGBTI activist and co-founder of the Ekurhuleni Pride Organising Committee (EPOC) Ntsupe Mohapi was honoured for her work against hate crimes and ‘corrective rape’ in her community.

Phumi Mthethwa, renowned for her activism and participation in social justice bodies such as the Treatment Action Campaign, the International Lesbian and Gay Association, and the Masithandane Collective, was accorded the inaugural Simon Nkoli Award – previously known as the Feather of the Year’ Award. While Mthethwa was not able to attend, she issued a statement about winning the award. 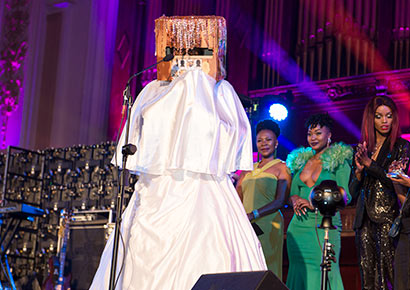 “To make it to ten years is a dream made real” said Feathers co-founder Thami Kotlolo. “I have been awed and inspired by the support that we’ve received from the community at large over the years. There’s no way we would have made it this far without them.” He added: “I can only extend thanks to them by promising to stay committed to the cause, and ensuring that the Feathers grows from strength to strength… we’ve only just gotten started, baby!”

The award ceremony was followed by a rollicking after-party where guests celebrated in true Mzansi style, rounding off what has been a decade of the Feather Awards.

Here are all the Feather Awards 2018 winners 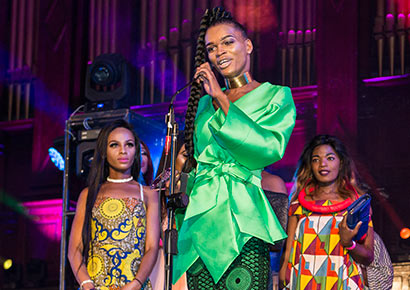