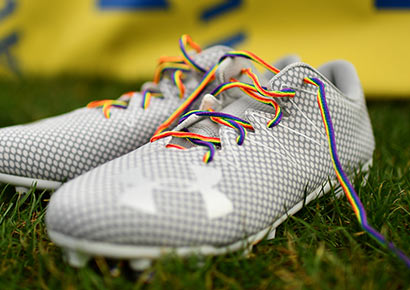 While other major rugby nations recently wore rainbow laces in support of intolerance against the LGBTQ community, the Springboks continue to refuse to do so.

Last week, a number of national teams spoke out against the gay bashing of former Wales captain,  Gareth Thomas. Some used their social media platforms or addressed reporters to condemn the homophobic attack and to reaffirm their belief in inclusive and welcoming rugby.

International Gay Rugby (IGR) also campaigned for all national teams to wear rainbow laces ahead of their fixtures last weekend as a visible and public affirmation of equality, a call that paid off.

South Africa is notable in its absence. In fact, in last weekend’s South Africa vs Wales rugby match in Cardiff, the very city where Thomas was beaten by a 16-year-old homophobe, a number of Welsh players took to the field wearing rainbow laces. The springboks did not.

MambaOnline was also not able to find any public statement by SA Rugby speaking out against the assault against Thomas. To find out why we are so dramatically lagging behind the rest of the rugby world, we reached out to SA Rugby, with four questions:

1) Why did SA Rugby not take a public stand against Thomas’ homophobic attack?

2) Why did the Springbok players not participate in wearing rainbow laces in the match against Wales?

3) What policies / initiatives does SA Rugby have in place to combat homophobia in rugby, among players and fans?

4) Does SA Rugby plan to take part in the Rainbow Laces campaign at some point?

We received an official response from an SA Rugby spokesperson who did not address these questions directly, but said that, “SA Rugby, of course, deplored the attack on Gareth Thomas – a trailblazer for inclusivity and acceptance within sport in general and rugby in particular.”

The spokesperson also suggested that a once-off statement supporting the Johannesburg-based Jozi Cats inclusive rugby club earlier this year was quite sufficient.

“In March, we made our position clear,” said the spokesperson. “Mark Alexander, the president of SA Rugby, affirmed our standpoint in support of the Jozi Cats saying: ‘Rugby is all-inclusive, and everyone participating in the game should be treated equally and should feel free to be themselves on and off the field, regardless of their gender, race and sexual orientation. There is no place for discrimination in the game. I would like to thank the Jozi Cats for the role they are playing in changing the face of the game and for their determination to show that there is a place for everyone in rugby’.”

As for the rainbow laces campaign (first launched by UK LGBTQ group Stonewall in 2013), the spokesperson argued that this was a step too far: “There are many social issues facing South Africa; unemployment, inequality, intolerance, farm murders, corruption, service delivery issues, poverty and there are many charitable causes as well as natural disasters such as droughts and fires which demand attention. We are frequently asked to support any number of them through the ‘vehicle’ of the Springboks. We cannot support them all; to be asked to choose between them is not the role of a sports federation.”

This last response in particular is a cop-out. The issue of homophobia in rugby, a traditionally unfriendly and homophobic space for LGBTQ people, is, like racism, not just “another” charitable cause. It is also directly a ‘rugby issue’. And so is the homophobic attack against Thomas, a former British Lions captain and the most capped Welsh rugby player in history. This was an international news story and a relevant and appropriate opportunity for the Springboks to have bravely made a small gesture.

It is unclear why other national teams appear to be able to successfully “choose” to highlight LGBTQ inclusion without any problem, but SA Rugby cannot. Every other major rugby nation is saying ‘no to homophobia’ in sport, and many have active campaigns to combat homophobic prejudice, yet not South Africa.

When asked for comment about SA Rugby’s response, Chris Verrijdt, Chairman of Jozi Cats, was diplomatic. He said that, “although we are disappointed SARU decided not to wear rainbow laces last weekend, we know that they join the global rugby fraternity denouncing the attack on Gareth Thomas earlier this month.”

He added that the club is “encouraged that the conversation around inclusivity, diversity and equality in rugby has started in South Africa and we shall continue to work together with SARU and our local unions to find ways of translating the support we have seen from local tournaments, leagues, associations and clubs into formal structures.”

Ben Owen, the chair of International Gay Rugby, told MambaOnline that the organisation is “working with all unions and World Rugby to ensure that the promotion of inclusivity remains an active dialogue between all players, clubs, unions and governing bodies across the world.”

It’s clearly a sensitive issue, but SA Rugby has a responsibility to tackle homophobia in the sport. It must stand up for our constitutional values, put programmes and campaigns in place and stop kowtowing to its conservatives supporters.