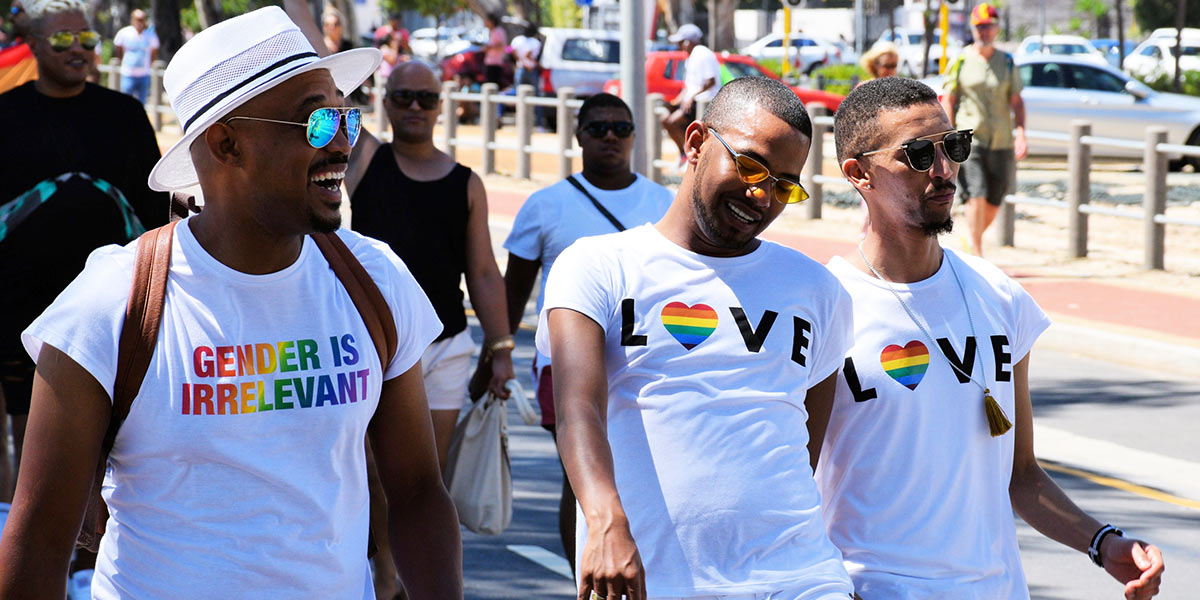 Gayle was born in Cape Town as “Moffietaal”

In the past two decades, there’s been a greater acceptance of gay men in many societies. This can be seen, for instance, by the number of overtly gay men who occupy centre stage on prime time TV. Drag queen Ru Paul, UK talk show host Graham Norton, and South African presenter Somizi Mhlongo are just a few examples.

Part of this trio’s appeal is they are insightful, glamorous – and downright likeable. They also speak in a particularly appealing way, using a campish banter which is easily recognisable, often deliciously funny and even cutting. What many viewers may not realise is that the way these men speak and the language they use draws from a long history.

Ru Paul draws from the US-born “Lavender Lexicon”. Norton’s language use is influenced by “Polari” which, in its time, was used primarily in the UK. And Somizi’s speech is influenced by the South African lexicon known as “Gayle” which is still in use today in the country. Ken Cage extensively explored the language’s history and development in his 2003 book “Gayle: the language of kinks and queens: a history and dictionary of gay language in South Africa”.

All of these varieties of language were developed historically by gay men (and to a lesser extent lesbians) who needed their own way of speaking to avoid detection and persecution. Some are barely spoken any more. Polari has completely died out. Gayle remains as popular as ever – but it has evolved, shifted and become a language spoken by more than just gay men.

It has been adopted by others, and is used often by those who want to show allegiance with gay people. There is a growing amount of research about Gayle, and it’s even been the subject of a short documentary, “Visiting Gayle” by filmmaker Lauren Mulligan.

As I have argued in my own research, the popularity and longevity of Gayle in South Africa shows how linguistic resources can be mobilised by anyone. The camp constructions of the language are not reserved for those who identify as “queer”. This also turns on its head the notion that speaking in a particular way, with certain intonations or phrases, “makes” a person gay.

The origins of Gayle

“Gayle” morphed from what was called “Moffietaal”. The word “moffie” describes not only gay men but also effeminate men and transvestites. Its origination can be loosely traced, writes author Bart Luirink, to the slang that sailors used and brought to the port city of Cape Town in the early part of the 20th century: a “morphy” was used as a “term of contempt among seamen for a delicate, well-groomed youngster”.

“Moffietaal” can be traced to coloured gay communities in Cape Town which have a long tradition of queer subcultures dating back to the late 19th century (the word “coloured” is used to describe people of mixed racial lineage in South Africa). From the Kaapse Klopse (minstrel concerts), first held in 1887, to the 1970s hairdressing salons of coloured working class suburbs in Cape Town, “moffies” developed and spoke a variety of language designed to avoid detection and persecution.

What makes “Gayle” different to gay varieties used in other parts of the world is that it uses a combination of women’s names and Afrikaans slang to describe other gay people or gay experiences. For example a “Polly Papagaai” is a gay man who gossips (“papagaai” means “parrot” in Afrikaans); an “Adele adder” is a vindictive gay man (“adder” being a kind of snake).

The word “queen” is also often suffixed to another word, frequently on the spot, to create a biting construction such as “Canderel queen” – Canderel is an artificial sweetener, so the name denotes an insincere person.

In my research published in 2009, I argued that linguistic resources can be mobilised by anyone. A person doesn’t need to be queer to use the camp constructions of Gayle.

This is a point that academics such as Esther Newton and Judith Butler make when they argue that camp generally – and camp with specific reference to drag queens – shows the very instability of femininity. Anyone can imitate and elevate to a level of parody the way that women are compelled to dress and talk.

Yet there seems to be a lingering perception by the populace at large that when a man speaks or acts camp that they must be a homosexual and a failed man.

Why do these perceptions linger?

There is a logic about how it is enacted: a masculine heterosexual man marries a feminine heterosexual woman and when a person veers from this recipe they could be punished, ostracised, gossiped about, bullied or in the worst case scenario killed.

Conventional heterosexuality is so powerful and encompassing that we are not even aware that it is a thing. It operates seamlessly in all aspects of our lives. So although Gayle endures and has developed a wider appeal, this does not mean that it is completely mainstream. It is used in specific sub-cultures and among those aligned with these sub-cultures. In other contexts, speaking Gayle could have terrible repercussions – for example at a barbecue with conventionally-minded South African men.

TL McCormick, Lecturer of Applied Linguistics, University of Johannesburg. This article is republished from The Conversation under a Creative Commons license. Read the original article.