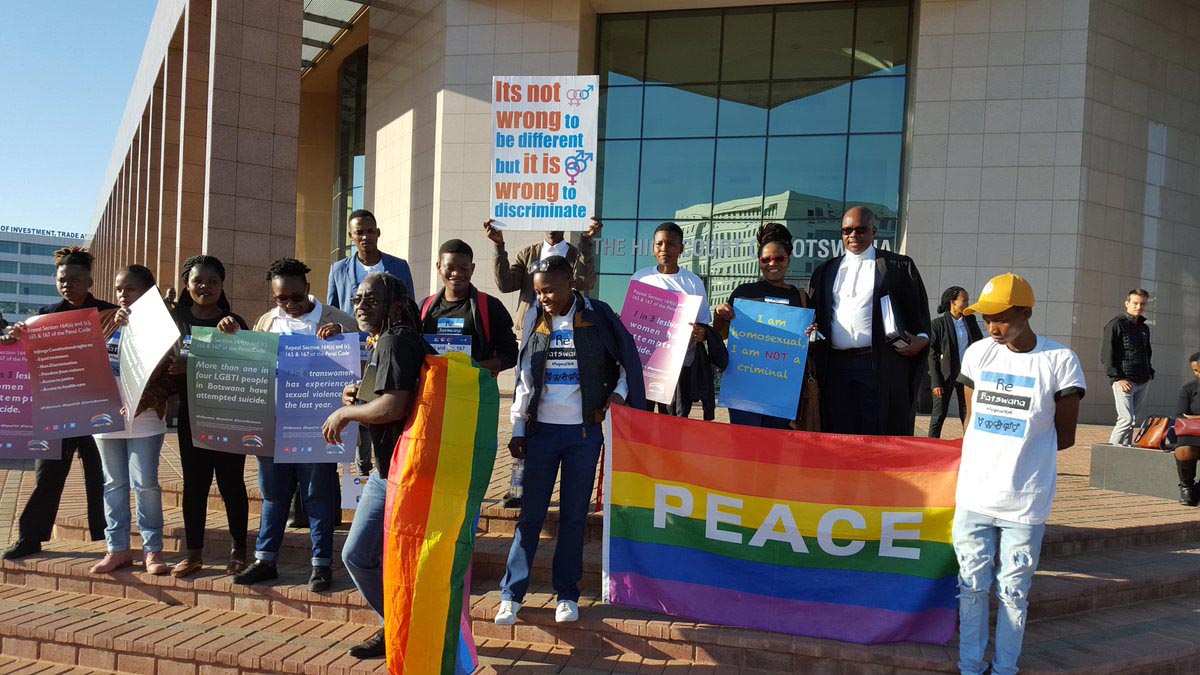 In a historic decision, the Botswana High Court has legalised homosexuality, making Botswana the latest African country to recognise the human rights of LGBTQ people.

These sections prohibit “carnal knowledge of a person against the order of nature” and attract a term of imprisonment of 7 years. In relation to section 167 of the Penal Code, the Court held that the offence of “gross indecency” was unconstitutional to the extent that it applied to acts committed in private, and accordingly severed the word ‘private’ from the provision.

“What regulatory joy and solace is derived by the law, when it proscribes and criminalises such conduct of two consenting adults, expressing and professing love to each other, within their secluded sphere, bedroom, confines and/or precinct?” asked the judges.

“Is this not a question of over-regulation of human conduct and expression, which has the effect of impairing and infringing upon constitutionally ordained, promised and entrenched fundamental human rights?”

The court continued: “Personal autonomy on matters of sexual preference and choice must, therefore, be respected. Any criminalisation of love or finding fulfilment in love dilutes compassion and tolerance.”

The case revolved around a gay man, identified as LM, who petitioned the court to declare sections of the Penal Code that outlaw consensual same-sex sexual conduct between adults unconstitutional.

At a hearing in March, LM explained in a statement read to the court, that the laws “limit me to interact with others who identify in the same way for fear of imprisonment.” He went on to explain that, “We are not looking for people to agree with homosexuality but to be tolerant.”

LM’s case was supported by the organisation Lesbians, Gays and Bisexuals of Botswana (Legabibo) as well as the Southern Africa Litigation Centre (SALC).

“This incredibly life-changing decision, although it does not right all the wrongs done to individual members of the LGBT community, is a step towards restoring our dignity as human beings,” said Anna Mmolai-Chalmers, Legabibo’s CEO.

“The decision has several implications for the LGBTIQ community. Not only does it provide legal affirmation and recognition of the rights of LGBTIQ persons, but it allows an important space for addressing public health issues more efficiently and effectively. We can finally start building a more tolerant society. The real work starts now.”

Botswana’s Attorney General had argued against repealing the laws, including suggesting that homosexuality was a Western fueled practice and that the case was not about homosexuals but about protecting the morals of society.

The victory follows the recent disappointing decision by the Kenya High Court to reject a petition to repeal that country’s colonial-era laws criminalising consenting homosexual acts.

“The Botswana courts have once again shown themselves to be champions of jurisprudence that acknowledges the dignity of LGBTIQ persons, and that they too have the right to equal protection before the law”, commented SALC Programme Lawyer Tashwill Esterhuizen.

“Through their sound legal reasoning and constitutional jurisprudence, the Botswana courts continue to set an example for other courts in the region on the important role that the judiciary can and should play in protecting and promoting human rights of all persons. We hope that this case will set an important precedent for other courts in the region and that they too will follow suit.”

Added Legabibo’s Advocacy Manager, Caine Youngman: “This decision makes it clear that the time to protect the rights of the LGBT community has indeed now arrived and that the government can no longer sit-back while LGBT persons face ongoing stigma, humiliation and discrimination as a result of these punitive laws.”