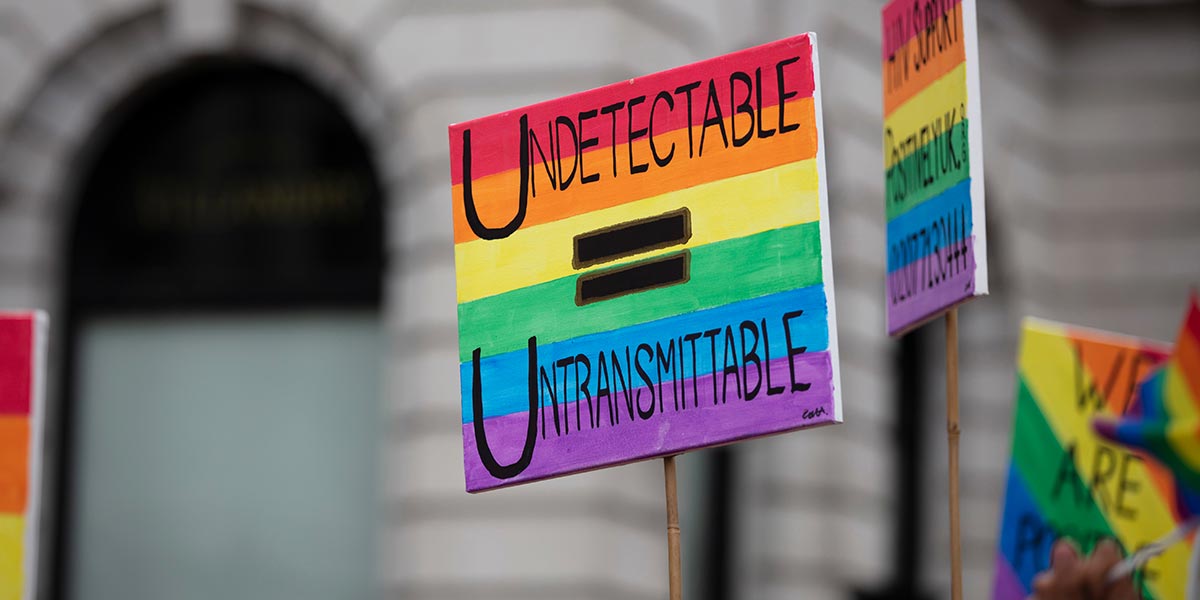 The U=U campaign highlights that those on treatment that suppresses HIV cannot transmit the virus.

A new report released by UNAIDS has painted a mixed picture of the state of the global fight against HIV/AIDS. While some countries, such as South Africa, show marked improvements, stigma and discrimination are holding others back.

The report, Communities at the centre, shows that key populations and their sexual partners now account for more than half (54%) of new HIV infections globally. In 2018, key populations—including people who inject drugs, gay men and other men who have sex with men, transgender people, sex workers and prisoners—accounted for around 95% of new HIV infections in eastern Europe and central Asia and in the Middle East and North Africa.

However, the report also shows that less than 50% of key populations were reached with combination HIV prevention services in more than half of the countries that reported. This highlights that key populations are still being marginalised and being left behind in the response to HIV.

“We urgently need increased political leadership to end AIDS,” said Gunilla Carlsson, UNAIDS Executive Director. “This starts with investing adequately and smartly and by looking at what’s making some countries so successful. Ending AIDS is possible if we focus on people, not diseases, create road maps for the people and locations being left behind, and take a human rights-based approach to reach people most affected by HIV.”

Globally, around 1.7 million people became newly infected with HIV in 2018, a 16% decline since 2010, driven mostly by steady progress across most of eastern and southern Africa. South Africa, for example, has made huge advances and has successfully reduced new HIV infections by more than 40% and AIDS-related deaths by around 40% since 2010.

However, there is still a long way to go in eastern and southern Africa, the region most affected by HIV, and there have been worrying increases in new HIV infections in eastern Europe and central Asia (29%), in the Middle East and North Africa (10%) and in Latin America (7%).

The report was launched at a community event in Eshowe, South Africa, by Ms Carlsson and David Mabuza, the Deputy President of South Africa. It contains case studies and testimonies identifying community programmes that can quicken the pace of the response to HIV.

“South Africa has a rich history of communities being at the centre of the AIDS response, so it is fitting that we launch the 2019 UNAIDS Global AIDS Update in this country, in Eshowe, in KwaZulu-Natal, where a community-based service delivery model, with HIV at its centre, is showing results,” said Deputy President Mabuza.

Disconcertingly, the report shows that the gap between resource needs and resource availability is widening. For the first time, the global resources available for the AIDS response declined significantly, by nearly US$ 1 billion, as donors disbursed less and domestic investments did not grow fast enough to compensate for inflation. In 2018, US$ 19 billion (in constant 2016 dollars) was available for the AIDS response, US$ 7.2 billion short of the estimated US$ 26.2 billion needed by 2020.

AIDS-related deaths continue to decline as access to treatment continues to expand and more progress is made in improving the delivery of HIV/tuberculosis services. Since 2010, AIDS-related deaths have fallen by 33%, to 770 000 in 2018.

Communities at the centre shows that the full range of options available to prevent new HIV infections are not being used for optimal impact. For example, pre-exposure prophylaxis (PrEP), medicine to prevent HIV, was only being used by an estimated 300 000 people in 2018, 130 000 of whom were in the United States of America. In Kenya, one of the first countries in sub-Saharan Africa to roll out PrEP as a national programme in the public sector, around 30 000 people accessed the preventative medicines in 2018.

Men remain hard to reach. Viral suppression among men living with HIV aged 25–34 years is very low, less than 40% in some high-burden countries with recent surveys, which is contributing to slow progress in stopping new HIV infections among their partners.

Gains have been made against HIV-related stigma and discrimination in many countries but discriminatory attitudes towards people living with HIV remain extremely high. There is an urgency to tackle the underlying structural drivers of inequalities and barriers to HIV prevention and treatment, especially with regard to harmful social norms and laws, stigma and discrimination and gender-based violence.