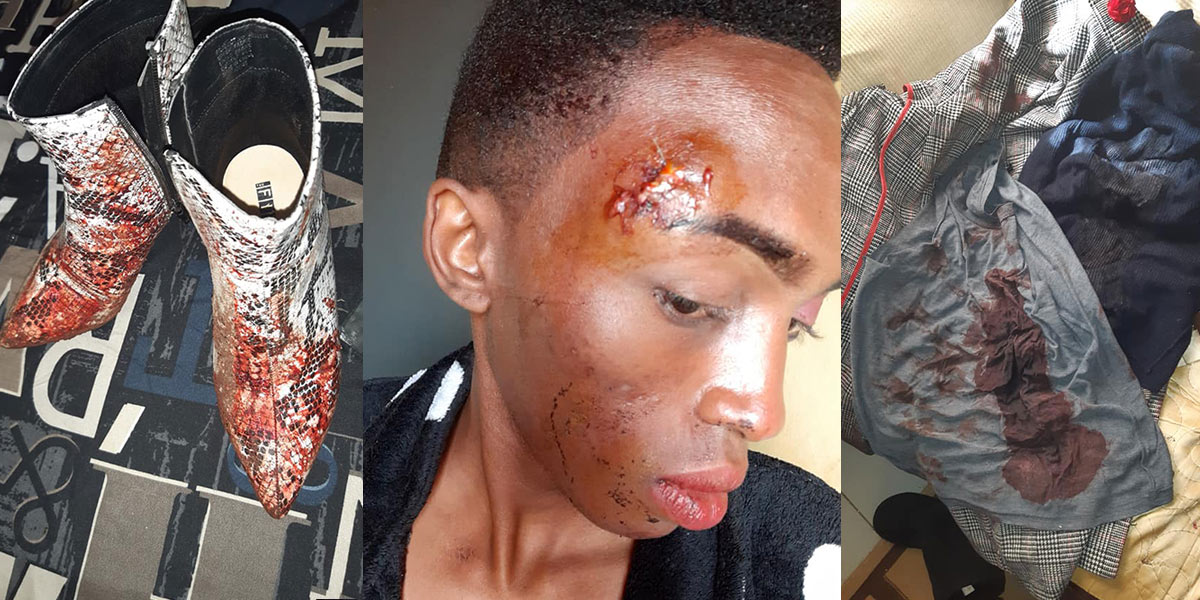 A young LGBTQ man says he was beaten unconscious after using the women’s bathroom at his longtime local tavern in Daveyton, on Johannesburg’s East Rand.

Mpilo Ndlangamandla, 24, a cleaner and makeup artist, claims he was attacked by the venue’s bouncers so severely that he had to be hospitalised.

Ndlangamandla identifies as a feminine gay man and is a finalist in the upcoming Miss Daveyton LGBTIQA 2019. He was at the tavern late on Saturday night when he used the women’s bathroom, which he has often done.

“I was with a friend of mine who is a girl. I usually ask her to accompany me when I go to the toilet because I am afraid to go alone,” he tells MambaOnline. “But that night I went to the toilet alone because I didn’t want to bother her.”

He explains that he prefers to use the women’s bathroom “because that’s where I feel safer and girls are more understanding when it comes to my sexuality.”

This time, however, he says that as he walked out of the bathroom, he was called over by a bouncer. “He started to make jokes. He asked me why I am in the females’ toilets,” says Ndlangamandla.

He claims the man was aggressive and homophobic towards him. “He said, ‘you are a male, not a female and I don’t know why you are wearing [femine clothing] or trying to act as a girl while you know that you are a male. Stop acting sissy too!”

Another bouncer then allegedly began to mock Ndlangamandla, telling him that he ‘loves’ him. Ndlangamandla’s female friend tried to calm the situation but the argument escalated after he told the man, “Why are insisting that you love me but you are against my sexuality and, after all, you are not my type?”

Ndlangamandla says he was then pushed by the bouncer and tried to defend himself by brandishing a beer bottle. The bouncer allegedly responded by assaulting and beating him with a sjambok. Ndlangamandla admits to having thrown a beer bottle at his attacker during the melee but doesn’t know if it hit the man.

The alleged assailant was held back by someone from continuing the attack and Ndlangamandla was able to stumble away bleeding profusely. He collapsed, only to come to at the hospital hours later. He required stitches and was put on a drip to recover.

Ndlangamandla acknowledges that some may have a problem with him using the women’s bathroom because he identifies as a man, “but if I go to the males’ toilets men are not comfortable around me and that’s where I get the harassment. I don’t feel comfortable to be around guys alone as a gay guy but woman are more understanding.”

The tavern owner apologised to him for what happened but Ndlangamandla has laid charges of assault against his attackers at the Etwatwa Police Station. “I would like to see them behind bars paying for what they did,” he says.

After he posted pictures of his injuries on Facebook, Ndlangamandla was faced with further appalling abuse. “They should have killed you, not only beating. You are very stupid,” said one man, while another commented, “repent”. He was also threatened, with an individual writing: “Better carry ur ass out of Our Continent Africa because if I come across u!!!!”

While Ndlangamandla is physically on the mend he has been deeply traumatised by the experience. “I am no longer confident about who I am and what people think of me. It makes me [feel] less of a human being. I feel like what I am is wrong… but this is how I was born.”

Lee Siba, founder of Miss Daveyton LGBTIQA and Chairperson of Uthingo the Rainbow, describes Ndlangamandla as “a shy person with a beautiful personality.”

She says that many hate crime attacks in the area go unreported because the police are also seen to be homophobic.”We are victimised the minute we walk out of our comfort zone, in the streets, clinics, taxis ranks and others even at home.”

Siba and members of her organisation are planning to hold pickets and awareness workshops around the township. “This has to stop, our rights only exist in the Constitution,” she says.

MambaOnline has not been able to contact the tavern and will not identify the venue until we receive a comment from the owner about what took place.

In a statement to MambaOnline, OUT LGBT Well-being’s Love Not Hate campaign condemned the incident and said it reflected “the threat to the safety of queer bodies in public spaces.”

Although it can be argued that Ndlangamandla should not have made use of the female bathroom, he was not there to cause harm “but rather acted out of fear for his safety,” asserted the organisation,

“The use of violence is no means a justifiable defence especially considering the extent of the victim’s injuries and the overt trauma it has caused. This dispute could have been resolved differently through conversation.”

Love Not Hate further called for measures to protect LGBTQ+ people: “You cannot assert your dignity if you are in constant fear for your life or safety. A definite need for sensitisation is apparent in places that are deemed heteronormative so that employees are made aware of the threats that queer bodies often experience.”