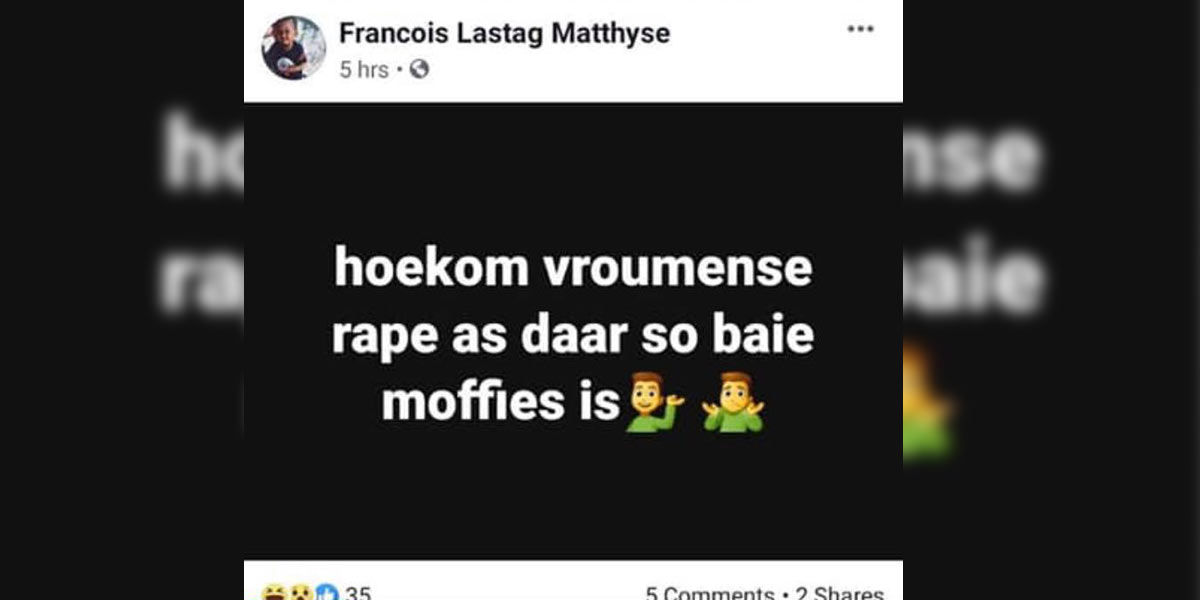 A Western Cape man is in hot water with his employer, Spar, after posting a hate speech comment on his Facebook profile about raping gay men instead of women.

The Afrikaans post, shared last week by Francois Matthyse from Darling, reads: “Why rape women when there are so many moffies [f*ggots]”.

The comment comes in the wake of protests and widespread outrage at a spate of recent horrific gender-based violence (GBV) incidents against women that have rocked South Africa.

It is also in the context of a history of violent hate crimes against LGBTQ people in the Western Cape. A trial of three men who are accused of the multiple gang rape of a young gay man is currently underway in Ceres.

Members of the LGBTQ community saw Matthyse’s post and reported the statement to the SA Human Rights Commission (SAHRC) and the Pink Loerie Foundation. Some also noted that according to his Facebook profile he works for the Langebaan Spar as a fruit and veg assistant.

A Cape Town architect, who asked not to be named, was one of the first to condemn the post. He also lodged a complaint with the SAHRC and contacted the grocery store. He says he was initially told by the Spar that it could not do anything as the hate speech post was on Matthyse’s personal page and he had a right to express himself.

“Seeing the protests in Cape Town and then seeing a comment from someone who encourages the rape of anyone is vile,” the man told MambaOnline. “I can’t believe people are allowed to say something like that and get away with it.”

“How can we be silent about this?” commented an individual from Pretoria. “This kind of hate speech can lead to more ‘corrective rape’ attacks.”

Another added: “In the current climate of the #Me2 campaign and the public outcry over the intolerable levels of crime against woman and children he felt it was okay to rape gay men? This is not acceptable.”

The Pink Loerie Foundation contacted Spar head office about the post, which has since been deleted. The company responded that “management were horrified” by the “regrettable and unacceptable” post by “an employee of an independently owned Spar store.”

“The owner of the store has been contacted and has advised us that appropriate action has been instituted against the employee concerned,” Kevin O’Brien, Group Risk and Sustainability Executive at the Spar Group Ltd, told the organisation in an email.

“Spar wishes to record its strong objection to comments of this nature and of any other comments which incite any form of discrimination including but not limited to racial, gender, religious, sexual preferences etc,” he said.

Janeen Johnston, Customer Care Controller, added that the staff member “has been suspended and will shortly have a disciplinary hearing and counselling.”

The company’s response was generally welcomed but one man on Facebook made the point that Spar should not refer to “sexual preference” but rather “sexual orientation” as being gay is “not a choice.”