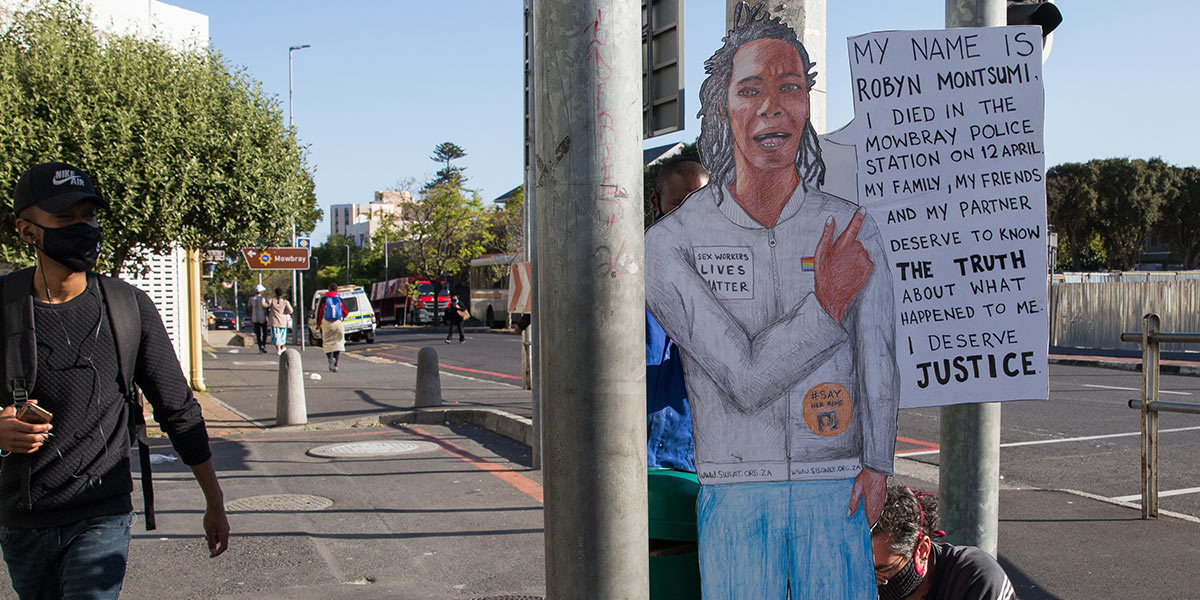 On 9 April, sex worker and activist Robyn Montsumi was arrested on a drug charge and held at the Mowbray police station. A few days later she died in police custody.

The Independent Police Investigative Directorate (IPID) is investigating what is allegedly a suicide by hanging. Sex worker advocacy groups are demanding an update on the investigation. SWEAT has also referred the case to the South African Human Rights Commission.

To raise awareness, artist Clinton Osbourn on Tuesday made a life-sized portrait of Montsumi in wax crayon, laminated it and put it up on a pole near to the Mowbray police station.

Osbourn says he was haunted by Montsumi’s death. “I wanted to make some kind of statement,” he says. “There have been no consequences … Somebody is responsible, but nobody is being held responsible.”

Montsumi is pointing at the police station and has a speech bubble with: “My name is Robyn Montsumi. I died in the Mowbray police station on 12 April. My family, my friends and my partner deserve to know the truth about what happened to me. I deserve justice”.

“They [police] need to know that there are people that are watching them,” he said.

Even though Osbourn expects police will take the artwork down, he says he felt a sense of relief once it was put up.

Constance Mathe, co-ordinator at the Asijiki Coalition (a group advocating for the decriminalisation of sex work) and a friend of Montsumi, says the portrait is a beautiful likeness.

Montsumi, she says, was a kind and caring person and a “peacemaker”, one of the founders of the LGBTIQ+ sex worker movement at the Sex Workers Education & Advocacy Task force (SWEAT).

Like many people in her community, Mathe does not believe it was a suicide. She says Montsumi was in the police cell “many times”. Since her death, a number of memorials and protests have been held outside the police station. She hopes the picture stays up “as a memory”.

Osbourn, who is an employee at SWEAT and has a history of art activism including having worked at Young in Prison, has made collaborative comic books and is a member of Kollektivo Illuminoso Fresco, an art collective.

This article was written by Ashraf Hendricks and first published by GroundUP.