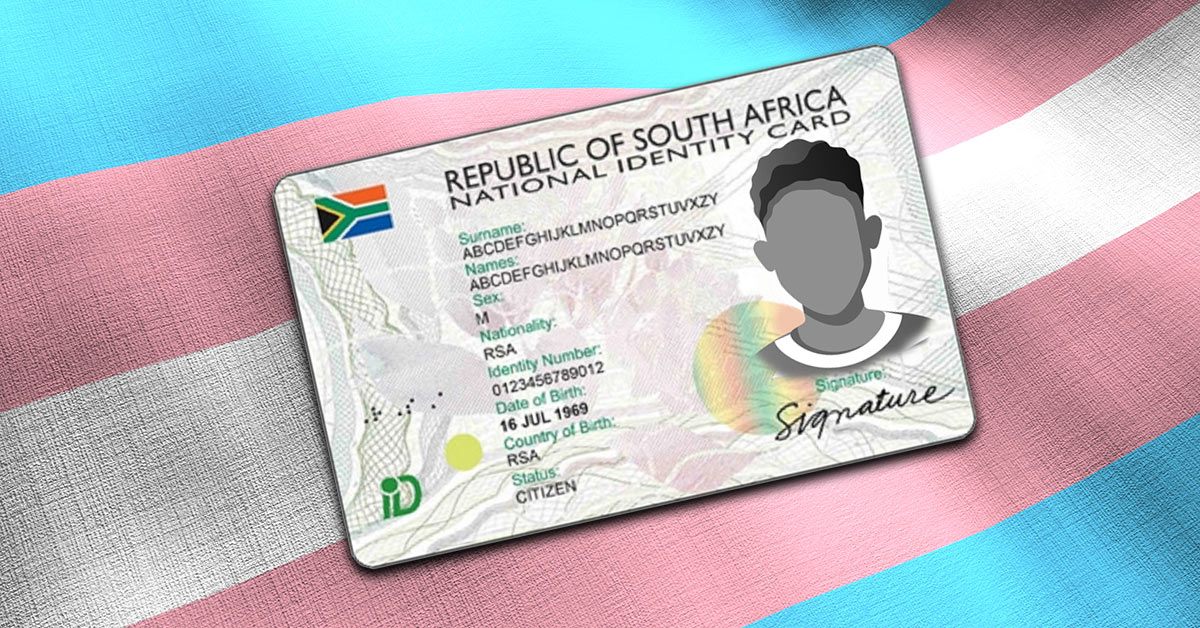 The South African government is considering including a third gender option in identity documents. Iranti’s Kellyn Botha looks at the proposed policy.

Imagine yourself the parent of a newborn. Your child is intersex but official paperwork demands a binary answer: male or female. And you need to make the decision at the hospital so that it can be permanently recorded on your child’s official records.

Now government itself is suggesting a third option under the new Home Affairs ID Management Policy proposal. But is legal reform enough in a country like South Africa?

There is a lot that we can grapple with in terms of the impact of this new policy if accepted, but this is but a baby step towards realising the human rights of some of society’s most invisible and vulnerable persons: intersex, transgender and gender diverse South Africans.

Amid the proposed security features of the policy is a clear shift towards recognising the importance of gender markers as a validation of who we are.

The policy puts forth sweeping changes to the systems in place at the Department, such as having stricter regulations around the registrations of births and deaths, the capture of a wider range of biometric data to limit the potential for identity theft, and digitising many of the processes currently carried out primarily on paper in Home Affairs offices across the country.

A shift towards a proposed third gender option on our Smart ID Cards and ID numbers has been broadly welcomed by LGBTI+ activists and advocacy groups. For many, it opens the door for legal recognition of otherwise invisibilised demographics.

Identity numbers of South African citizens currently include a code for gender in the seventh digit: 0-4 means you are legally recognised as female, while 5-9 means you are legally recognised as male. The Alteration of Sex Description and Sex Status Act (Act 49 of 2003) currently allows transgender and intersex individuals to amend their gender markers from “M” to “F” or “F” to “M”, and with it changes their ID numbers to reflect their identity.

This system is fraught with problems, for which many in the human rights sector engaged with Minister of Home Affairs, Dr Aaron Motsoaledi, in September last year. One issue, in particular, is the way the binary system excludes gender-diverse and intersex individuals who have no option other than to be placed incorrectly into the legal boxes of male and female.

It is estimated that globally about 1.7% of people are intersex. While we do not know in South Africa how many people fall into this category – or how many are transgender – it seems at least 5% of all people are somewhere on the LGBTQ+ spectrum.

Under the new system, the ID number would either not code for gender at all or would have a third categorisation along with male and female at the seventh digit. Home Affairs currently seems to envision this as a “third sex” or “third gender” into which they can place all trans and intersex individuals by default.

But, various organisations have already engaged with Home Affairs to explain why this is problematic: All persons should be able to identify as whatever gender they choose. To provide a progressive third option for those who are not men or women, only to force transgender and intersex individuals who are men and women into it, is harmful and reductive.

Nobody loses anything by extending the scope of our laws to include all of humanity’s natural diversity.

Furthermore, for such a category to explicitly link to one’s sex or gender means that any bank clerk, police officer, or other official will immediately be able to identify a person as an “other”. And to be seen an “other” in a country as homophobic, transphobic, and violent as South Africa poses incredible danger to members of our community.

It would be far more beneficial to have a category more akin to an “undetermined” designation, so that any citizen of any background can opt to utilise it without the need to be labelled. This would also give cisgender (persons who are not transgender) South Africans who are concerned about the State’s growing security apparatus a means, potentially, to limit the kinds of personal information which is stored online – in this case, gender.

Many would argue that such binary definitions are essential to keeping track of the country’s data, especially in the light of the widespread issue of Gender-Based Violence, but the reality is that many people are already being misgendered on official documentation and many trans and gender-diverse people are also victims of GBV, so these arguments largely fall flat upon interrogation. Giving people the option to choose how their gender is recorded would correct this misgendering.

The response to a public call for engagement on gender on our identity document shows that changing the law might be easier than changing attitudes, however. But we must start somewhere.

We recognise that most South Africans simply do not understand what it means to be transgender, gender-diverse or intersex. We know that this lack of knowledge leads to undue concern and debate around bathrooms, schools, morality and science.

It is essential therefore to ensure that discussions of the new policy do not fuel public anxieties by peddling misinformation.

Nobody loses anything by extending the scope of our laws to include all of humanity’s natural diversity. As it stands, nobody will be forced to give up their ID numbers and get new identity documentation – nobody will have to deal with the bureaucratic machine that is the Department of Home Affairs in order for this change to be facilitated, as it will only apply to all new ID numbers issued going forward, and all new identity documents sent out after the new law is promulgated.

In short, for those who are not trans, gender-diverse or intersex, the third gender marker option will not affect you if you don’t want it to. Division, judgement and hatred are sown by inaccurate reporting, and a deliberate campaign of detraction by those who would rather see our country slip back into the bad old days of violent racial, sexual and ideological suppression.

While there are still issues of concern regarding the securitisation of the state and legal entrenchment of xenophobic attitudes through some of the ID Management Policy’s proposed changes, we must acknowledge that, in terms of legal gender recognition, this document signals a marked shift toward progress.

And for South Africa’s intersex, transgender and gender diverse persons, this is a step in the right direction.

Kellyn Botha is a transgender activist supporting advocacy at Iranti. South Africans can make their submissions to oidmpolicy@dha.gov.za before 15 March 2021.