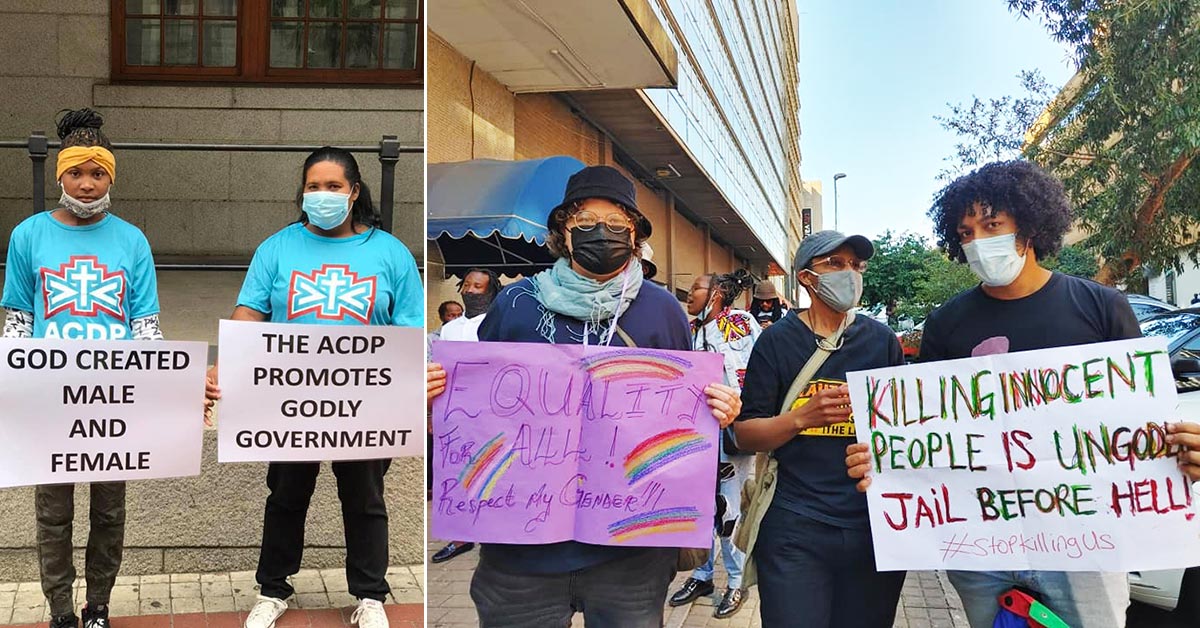 So much for Christian values! Instead of crying out against LGBTIQ+ murders, the African Christian Democratic Party (ACDP) has taken to the streets to protest against inclusion in schools.

While terrified LGBTIQ+ people marched on Monday to demonstrate against the shocking spate of brutal hate crime murders in recent months, the ACDP chose to picket against the Western Cape’s draft policy on gender identity and sexual orientation in public schools.

A group of ACDP supporters gathered outside the Western Cape Provincial Parliament to hand over a memorandum to education officials. The party claims that the draft policy and Comprehensive Sexuality Education “promotes promiscuity” and aims “to change the sexual and gender norms of society.”

The Western Cape Education Department (WCED) published the guidelines last year with the aim of creating an LGBTIQ+ affirming, safe and inclusive environment in the province’s schools.

ACDP picketers held up signs that stated: “Keep ungodly policies out of schools”, “God created male and female,” and “Down with unisex bathrooms”.

In a Facebook post, the party accused the DA (which is the dominant party in the Western Cape government) of “planning to actively mislead & confuse school kids in the WC with their draft regulations on gender identity and gender orientation.” The ACDP added: “Biological sex is binary – male & female.”

The timing of the picket was appallingly callous, taking place on the same day in which dozens of members of the LGBTIQ+ community desperately pleaded for their lives to be protected at protests in Johannesburg and Cape Town.

Activists have pointed out that the lack of education in schools about sexual and gender diversity plays a direct role in creating a society that perpetuates discrimination and violence against LGBTIQ+ people.

“People are not educated on gender identity and different sexual orientations,” Roché Kester, OUT LGBT Well-being’s Hate Crimes Manager, told the Weekend Argus. “Structures in our society have clear gender binary. Systems like schools and universities do not educate or include enough information in the curriculum on the LGBTQ+ community.”

MambaOnline is unaware of the ACDP condemning or speaking out against the recent murders, which have seen six LGBTIQ+ people slain in just two and half months across the country. It seems that for the ACDP, core Christian values of love,  compassion and respect for life do not extend to the LGBTIQ+ community.

At 11am this morning, ACDP Western Cape handed over a memorandum to the Provincial Minister of Education in the Western…

The DA is planning to actively mislead & confuse school kids in the WC with their draft regulations on gender identity and gender orientation.

Biological sex is binary – male & female.
Science confirms the Bible – always has and always will.

Stand with us & reject the DA. https://t.co/Yc6RvzaQK3

In solidarity with Vaal Lgbt and all the partner orgs, and queer community that came out to protest today. #enoughisenough

Today Hannah, Inés and I joined the solidarity march to end queer and trans hate. Thank you my love Phumi Mtetwa for…