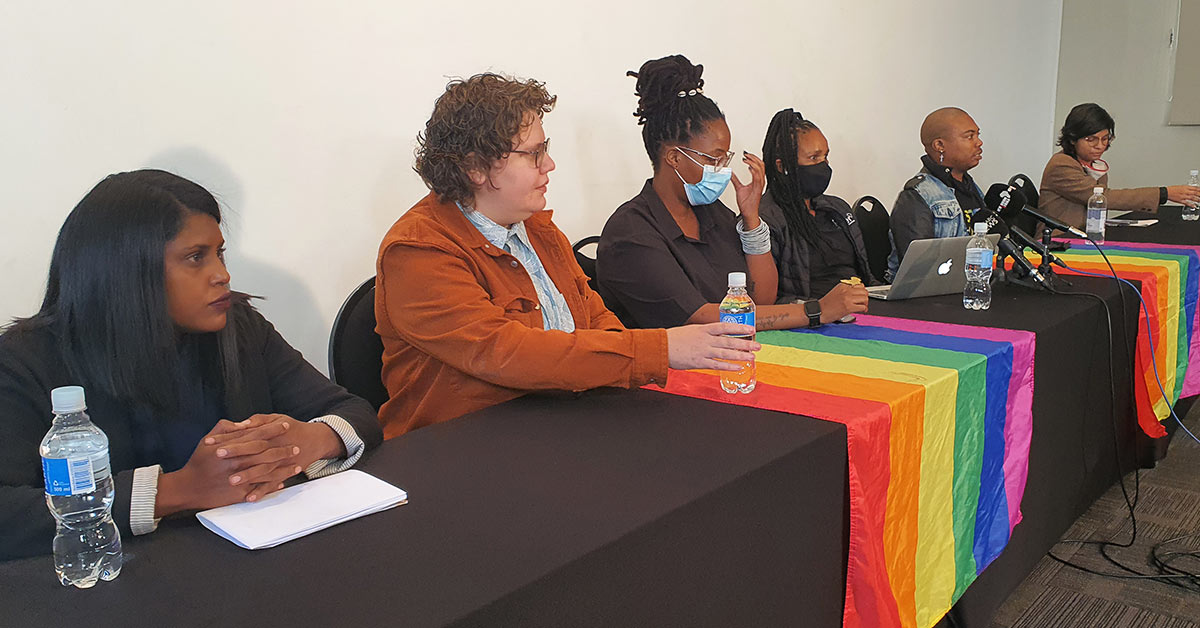 In the wake of an unpreceded wave of hate crime murders, the LGBTIQ+ community has united in calling for President Cyril Ramaphosa and all South Africans to stand up to queerphobia and hate.

On Wednesday, representatives of the LGBTIQ+ community gathered at Constitution Hill in Johannesburg for a press conference to address the crisis that has seen at least six (known) individuals murdered in just over two months.

A statement, signed by more than 20 LGBTIQ+ and human rights groups from across the nation, called out the government and others for not taking a stand against LGBTIQ+ stigma and discrimination.

“Right now it feels like there is a crisis happening. People are scared to leave their houses and people are scared to be themselves. And under our Constitution, we can’t have that. LGBTIQ+ people are part of South Africa and therefore they have the same rights as heterosexual or cisgender people,” said Roché Kester, OUT’s Hate Crimes Manager.

Among the demands, was a call for President Ramaphosa to make an urgent public statement by the end of this week (Friday 23 April 2021) condemning and calling for an end to the violent attacks on the LGBTIQ+ community.

Should he not address their concerns, activists said they will consider marching to the Union Buildings.

The groups further insisted that action be taken to enact the Prevention and Combating of Hate Crimes and Hate Speech Bill, which has been in limbo since 2018.

Kester said that the National Task Team set up by government to monitor LGBTIQ+ hate crimes was not functioning as it should. “People that are supposed to be attending these meetings, like the South African Police Service, just don’t show up,” she revealed.

Religious and traditional leaders were also criticised for failing to use their influential positions in society to embrace and promote the acceptance of the LGBTIQ+ community.

“Religious leaders who stand on the pulpit, they preach ‘God is love’ but on the other hand, they preach hate towards LGBTI people and equate us and our lives as worse than animals. That is unspeakable,” said Virginia Magwaza of The Other Foundation.

Below is the landmark statement in full.

South Africa, it is enough

Over the past two and half months, South Africa’s LGBTIQ+ community has been rocked by a series of brutal hate crimes against its members – from KwaZulu-Natal to Gauteng, from the Eastern Cape to the Western Cape. At least six lives – that we know of – have been snuffed out in cold blood.

We have been here before.

Since the dawn of democracy, LGBTIQ+ South Africans have been brutalised, raped and killed across our nation. The list is long. Names like Sizakele Sigasa, Salome Maoosa, Eudy Simelane, Gift Makau, Sana Supe, Nare Mphela, Kirvan Fortuin and Lindo Cele may stand out but so many others did not make headlines. So many more have gone unrecognised as hate crime victims at all because even today we still have no hate crime legislation in this country.

Today we still fear to simply be ourselves, to dress how we choose or to share an embrace – not only in public but also among those who we may count as friends and neighbours. They too are our murderers; sometimes children as young as 14.

Not only do we fear for our very lives, but we continue to face discrimination all around us. Social media platforms are replete with queerphobic words, threats and slurs with no consequences. Religion continues to be used as an excuse to debase our community in ways that would never be tolerated when it comes to other citizens or groups. Our state dehumanises us in police stations and government offices.

Our community’s plight is a bloody stain spreading across our constitutional democracy and our leadership. We’ve seen a seemingly endless stream of conferences, workshops, task teams and statements but truthfully there has been little action.

South Africa’s Constitution does not just come with rights but also responsibilities, including leading by example. Our great continent is still plagued by LGBTIQ+ hate that has roots in its colonial past; a twisted heritage that we simply refuse to acknowledge or shake off and have misguidedly embraced as African.

• That by the end of this week (Friday 23 April 2021) the President of the Republic of South Africa unequivocally speaks out, condemns and calls for an end to the violent attacks on the LGBTIQ+ community.

Furthermore, the Government of South Africa must:

We also demand that Religious, Spiritual and Traditional Leaders and Organisations:

We also demand that the South African Media more comprehensively report and speak out on these incidents to raise awareness and provide information to society.

Finally, we demand that all of South Africa’s citizens take responsibility to stamp out the abhorrent queerphobic views and actions of their friends, families and neighbours.

This statement is supported by the following organisations: