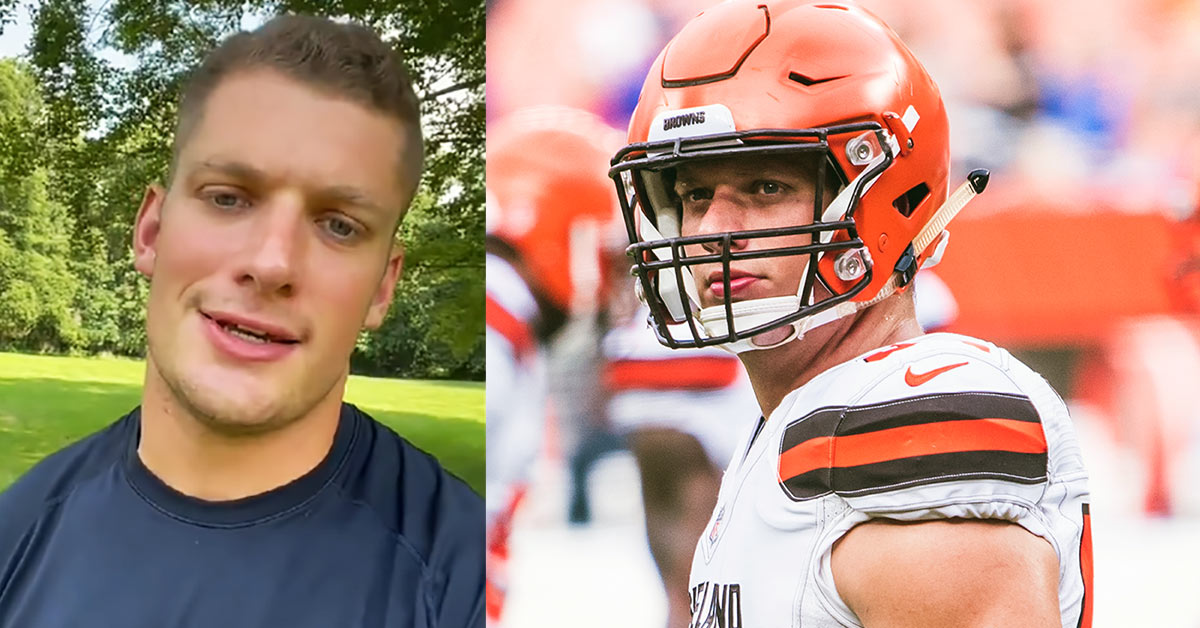 After Las Vegas Raiders defensive end Carl Nassib came out as gay, his jersey became a top-seller on Fanatics, an online retailer of sportswear.

The video was short and simple, but for America’s gay community it was a blockbuster event.

In an Instagram post, Las Vegas Raiders defensive lineman Carl Nassib announced from his yard in West Chester, Pennsylvania, that he’s gay and that, while he’s a private person, he feels “representation is so important.” He added that he would donate US$100,000 to the Trevor Project, which offers suicide prevention services to LGBTQ youth.

Thus the 28-year-old Nassib, now in his sixth year, became the first active NFL player to come out, a milestone that immediately garnered national attention, a mention in a congratulatory tweet from President Joe Biden and an outpouring of support on social media from powerful sports figures and fans.

As someone who has reported on football and other sports since the early 1990s, and who directs the sports journalism program at Penn State, I know this development does not mean the end of homophobia in sports. Yet to have a gay player in America’s most-watched sport represents a landmark moment.

Gay athletes long have been conscious of the toll of coming out.

Dave Kopay, a running back who came out in 1975, three years after his NFL career ended, said in a 1980s television interview that he sometimes felt “too straight for the gay world and too gay for the straight world.” The first retired NFL player to come out, Kopay described the hostile reaction to his announcement, including from his family. In his view, being openly gay froze him out from getting a coaching job in college or the NFL.

Tennis legend Billie Jean King once said she lost all her endorsements in the 24 hours after she was outed by a former lover in 1981.

The quest to combat discrimination against LGBTQ athletes has been long and fitful, particularly in male team sports, where homophobic language is commonplace and an emphasis on physical strength and a warrior mentality have clashed with gay stereotypes.

That’s why it was big news when, in 2013, NBA center Jason Collins came out as gay, becoming the first active player in any of the four biggest male American pro leagues – the NBA, NHL, MLB or NFL – to go public.

Even though athletes like Collins have come out in recent years, it doesn’t mean gay and lesbian fans and athletes live in a world that embraces them with open arms.

In 2020, Monash University in Australia conducted a survey of young people from six English-speaking nations. The Associated Press reported that, according to the survey, athletes who came out “were significantly more likely to report they’d been the target of homophobic behaviors in sport settings.”

And in early 2021, researchers at Ohio State University and Mississippi State University found that half of LGBTQ respondents in a study said that they’d experienced discrimination, insults, bullying or abuse while playing, watching or talking about sports.

Perhaps nothing illustrates the cost of coming out quite like the story of University of Missouri football star Michael Sam.

Since 2010, 12 players have been selected as the defensive player of the year in the Southeastern Conference, which many fans and pundits regard as the toughest league in college football. Of those players, 11 have been selected in the first round of the NFL draft and one in the second round. The median selection was ninth overall.

The exception to this incredible run of success was Sam, from Missouri, who tied C.J. Mosley as SEC defender of the year for the 2013 season.

Heading into 2014, Sam was projected as a fourth-round draft pick. Then he publicly declared in interviews that he was gay in February of that year and tumbled on the draft boards, sliding to a sixth-round projection.

Ultimately, he was not selected until the 249th pick overall – eighth to last – in the final round of the draft.

He never played a regular season down in the NFL and wound up leaving football after a very brief stint with the Canadian Football League’s Montreal Alouettes.

Whether Sam got a fair shot from the league or whether homophobia came into play is still a matter of debate in football circles. But his mind seemed to be made up at a University of New Mexico speaking engagement in 2019.

“The NFL gave me a raw deal,” Sam told students. “It was tough to forgive them. I love football.”

The times are changing

So to Jim Buzinski, co-founder with Cyd Zeigler in 1999 of Outsports, the leading LGBTQ sports website, it was an important step forward for gay rights to see the hypermasculine NFL welcome Nassib, a player who already had proved himself in the league.

Bit by bit, the number of athletes coming out has increased annually, Buzinski told me.

In 2014, Outsports began to post “Coming Out Stories,” in which gay athletes write about their own experiences revealing their sexual orientation. Authors – who have ranged from athletes at the high school, college and pro levels – were a little reluctant at first. But more and more readers saw the articles and wanted to talk about their own stories.

Now, Buzinski estimates, Outsports has posted 150 or more of the pieces, with so many submissions that he’s had to set a publishing calendar to keep the copy flowing smoothly.

The athletes “always find more support than they expected,” he said. “These stories, and moments like Carl’s announcement, create a positive feedback loop.”

As of this writing, the athletes profiled on that Coming Out Stories page include a rower, a swimmer, a softball player, a volleyball coach, a tennis player and a triathlete. A high school football player whose story got held a day because of the Nassib announcement was also featured.

“We haven’t had a cricketer yet,” Buzinski joked when I asked if any sports were missing.

A big factor in the shift toward athletes telling their stories was the 2015 Supreme Court ruling legalizing gay marriage, he said. “It was a touchstone moment. It made a huge difference and is now so accepted, there’s so much more representation in the media.”

Still, individual acts make a difference. So when Nassib came out, and supportive tweets from a range of people, including former Penn State teammate Saquon Barkley and NFL Commissioner Roger Goodell, quickly followed, it said something about acceptance of gay athletes. ESPN’s Adam Schefter reported the day after the announcement that Nassib had the top-selling jersey on Fanatics, an online retailer of sportswear.

Buzinski expects the trend to continue. He noted that Outsports is preparing its quadrennial count of openly gay and lesbian athletes participating in the Summer Olympics in July.

For Rio de Janeiro, that number was 56.

John Affleck is a Knight Chair in Sports Journalism and Society at Penn State. This article is republished from The Conversation under a Creative Commons license. Read the original article.