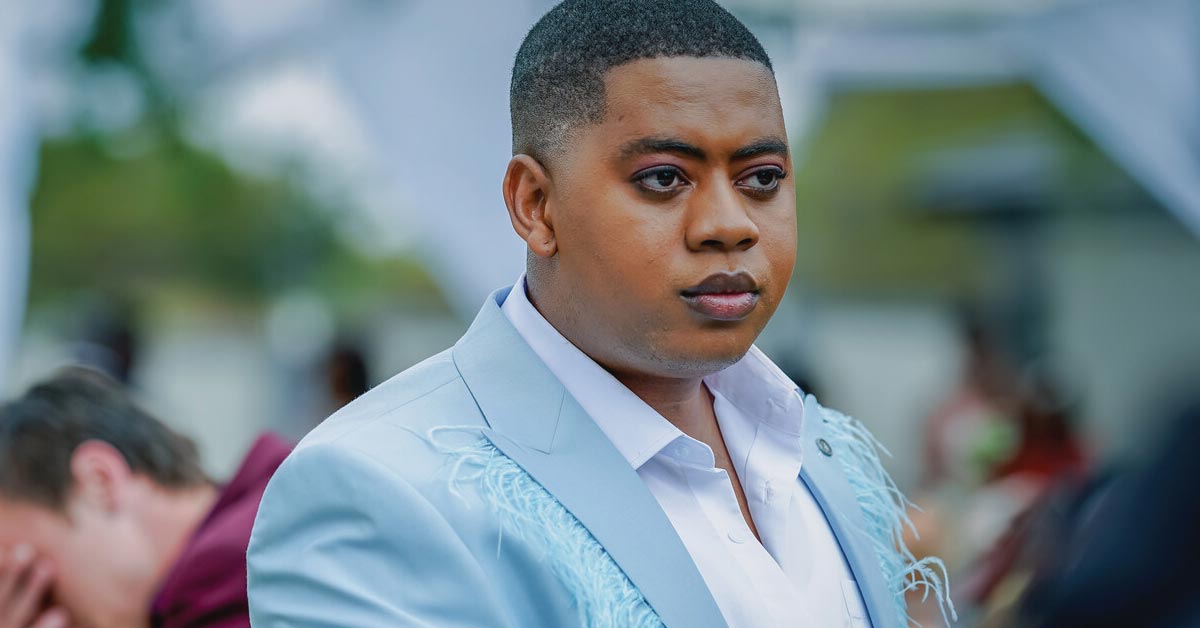 Linda Majola in The Wife

Gay TikTok star Linda Majola recently made his acting debut in The Wife, helping the first Showmax original telenovela trend at number one on Twitter.

Inspired by Dudu Busani-Dube’s bestseller books, Hlomu the Wife and its sequels, The Wife follows the lives of the eight Zulu brothers, a formidable crime family, through the eyes of the women they marry.

We caught up with the rising star from Durban to find out more about breaking barriers and being part of Showmax’s most-watched series launch ever (we have it on good authority that he’ll play a bigger role as the season progresses).

Tell us more about Linda Majola

uLinda Majola is from Durban, Ethekwini, from a little community called Bonela. I studied catering management, so for the past year, I’ve been running my food business. When lockdown began, I started creating content on TikTok, which started going viral. And then I started sharing it also on Instagram, which a lot of people appreciated. That was when people started seeing that I had a talent of being an actor and a talent to communicate to people. And so I auditioned for the role of uLanga. And after several months, I heard that I got the role. So from Tik Tok to TV.

Tell us about your character, Langa

Langa is a flamboyant, outspoken, bright human who happens to be gay and is also the twin brother to Hlomu. He’s really just navigating the new world that Langa is in and dealing with a lot of homophobia from the Zulu brothers. He’s not trying to fit in: he’s really saying, ‘This is who I am and this is my voice.’ It’s either, ‘You hear it or you just go away,’ you see. So Langa is honestly the embodiment of his name. He’s the sun. He brings sunshine. He brings the brightness to the room. So I hope abantu basekhaya bayayibona leyonto (people at home can also see that).

How similar are Langa and Linda?

The persona is similar, and the life experiences as well. I’ve had to also navigate the difficulties of being a queer man and being in rooms where people might not actually agree with my life and who I am. But I hope that we are able to address certain issues on the show and that people are able to just learn ukuthi umuntu wumuntu (a person is a person), regardless of their sexual orientation, their race, their religion or anything along those lines. We need to start breaking those stigmas.

How have you been finding working on a set for the first time?

Yep, this has been my first experience and God has been so good because I’ve been around people that are very encouraging. I’ve had a lot of awkward moments, you know, when I’m like, ‘How do I navigate this?’ The lingo, the jargon that they use. I always have to ask, ‘Nithini?’ (what are you saying), ‘Nicaza ukuthini?’ (what do you mean). But I’ve had an amazing experience on set. I’ve been working with some of the most talented people, people that have been in the industry for so long, who have been very supportive and helpful in advising me how to do izinto (things). I don’t take it for granted, the opportunity enginawo (that I have). I’m coming from working in my trailer, cooking and making fries for people every day, so now to be here with the kings and queens of their respectable fields, it’s been an amazing opportunity for me.

Who have you gotten along well with on The Wife?

What has been the highlight so far?

A highlight for me has to be the wedding, because, heeehh Nkosi (oh God), the wedding is H for hectic and Aw for awkward. It’s a lot. That was just amazing to shoot. It was beautiful and beautifully shot.

Have you read the book?

No, I have not read the book. I’m actually also very grateful that I have not read it. I want people to understand that the telenovela is inspired by the book; it’s not the actual book. So I felt like for a lot of people that have read the book, it was so difficult for them to start understanding the story and what the writers and the directors are trying to push as the narrative. But I am going to read the book. I am going to support the Black Girl Magic that is Dudu Busani-Dube, because she is so brilliant and she’s amazing.

Binge episodes of The Wife on Showmax now, with new episodes added every Thursday.