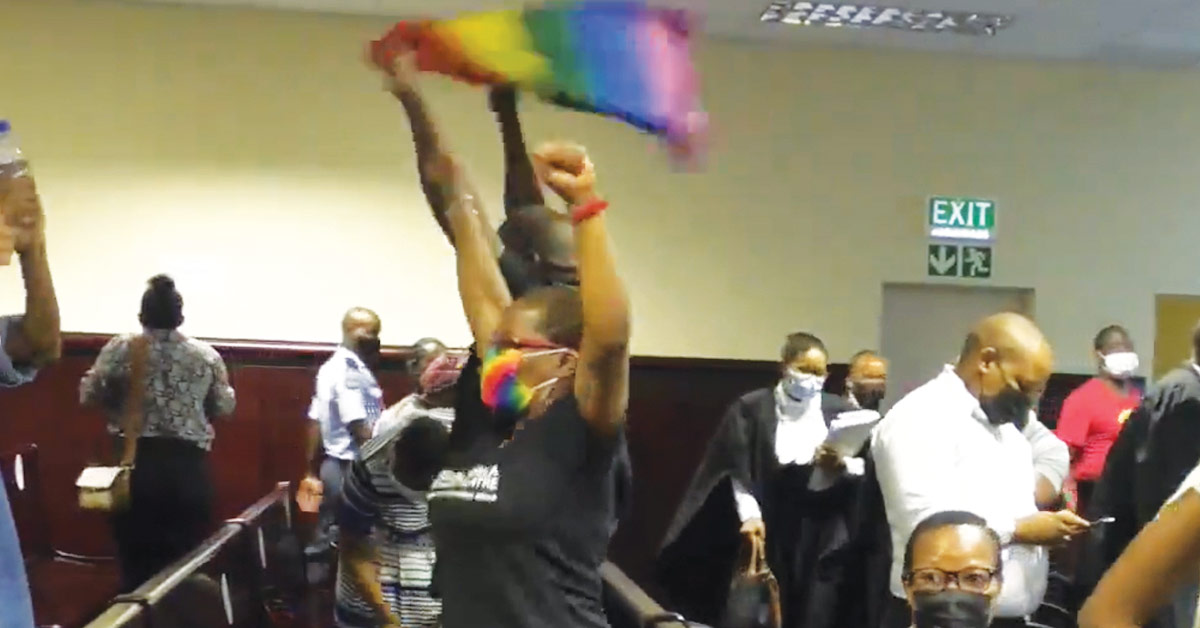 LGBTQ people in Botswana and across Africa are celebrating a decision by the Botswana Court of Appeal to reject an attempt by the government to reinstate the country’s ban on same-sex sexuality.

The victory follows the Attorney General’s appeal of the historic and unanimous 2019 ruling by the Botswana High Court that the criminalisation of consensual same-sex sexual activities violates the constitutional rights of LGBTQ people to dignity, liberty, privacy and equality.

It struck down colonial-era sections of the penal code that prohibited “carnal knowledge of a person against the order of nature” punishable by a term of imprisonment of seven years.

The government, however, soon after appealed the ruling claiming that “the High Court erred in arriving at this conclusion”. The appeal was heard by a full bench of five Botswana Court of Appeal judges on 12 October this year.

On Monday, activists wearing rainbow facemasks clapped, cheered and hugged in court after the judges roundly rejected the government’s appeal, upholding the original landmark decision. One jubilant person waved a rainbow flag in the court while another exclaimed, “We did it!”

In its ruling, the court found that “all of the Appellant’s grounds of appeal have been unsuccessful” and therefore “there can only be one outcome, and that is that the appeal must fail.” The government was also ordered to pay the costs in the case.

“There can be no discernible public interest purpose in the continued existence of sections 164(a) and 164(c) of the Penal Code,” wrote Court of Appeal Judge President Ian Kirby. “In my judgment they have been rendered unconstitutional by the march of time and the change of circumstances. At present, they serve only to stigmatise gay men unnecessarily…

“Those sections have outlived their usefulness, and serve only to incentivise law enforcement agents and others to become key-hole peepers and intruders into the private space of citizens. That, in my view, is neither in the public interest, nor in the nature of Batswana,” added Judge Kirby.

This is believed to be only the second decision from an apex court in Africa to decriminalise same-sex sex. The previous decision was from the South African Constitutional Court in 1999.

An emotional Caine Youngman, Head of Policy and Legal Advocacy, for LEGABIBO, commented afterwards: “It’s been my job for the last 17 years to ensure that the rights of the LGBTI community are respected. I’m glad to see this change in my lifetime.” He added that the ruling confirmed that “the rights of a minority should not be trampled on by a majority.”

In a statement, LEGABIBO CEO, Thato Moruti described the court’s ruling as “a momentous day in history, a victorious win in ascertaining liberty, privacy and dignity of the LGBTIQ persons in Botswana and definitely, this judgement sets precedence for the world at large.”

Moruti expressed hope that it would lead to “more engagement with various arms of government [and] will also set a trajectory towards a more inclusive and diverse nation.”

“This decision comes at a critical time”, added Anneke Meerkotter, Executive Director of SALC. “Arguments against the recognition of LGBTI rights continue to hold sway in parts of Africa, leading to legislative proposals that are an antithesis to the principle of the universality of rights. The Botswana Court of Appeal’s well-reasoned judgment makes an objective contribution to the discourse around the validity of criminal intervention in matters of sexual intimacy.”

The Court of Appeal’s decision is final and cannot be appealed further.