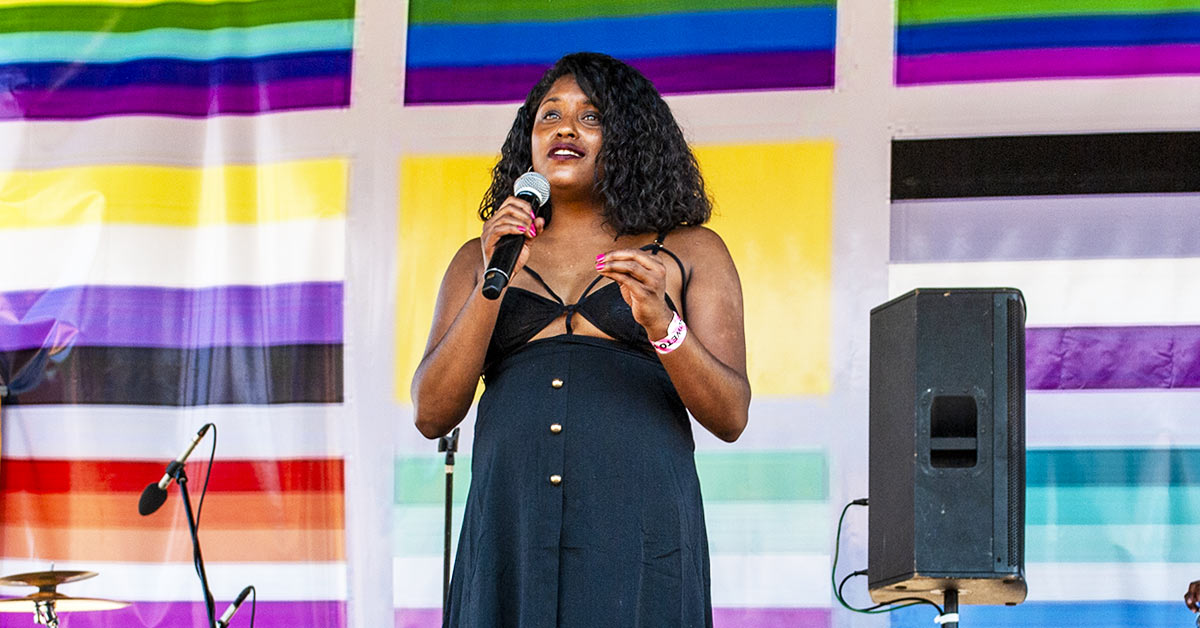 Kester was recently named Director LGBTI and Others in the Office of the Gauteng Premier and is responsible for finally establishing the province’s long-awaited LGBTI Desk (promised by Premier David Makhura as far back as 2014). The provincial desk is thought to be the first of its kind in the country.

Many in the LGBTI activism world will know Kester as the former Hate Crimes Manager at the Pretoria-based OUT LGBT Well-being over the past two years. In that role, she dealt daily with victims and survivors of hate crimes and discrimination and worked within structures alongside government (such as the hate crimes task team) while remaining critical of its failures. Before joining OUT, she was the Political Advocacy Coordinator for Cape-Town’s Triangle Project.

Kester’s history in the sector began as a student HIV peer educator at the University of the Western Cape in 2006, later joining the UWC Gender Equity Unit. She was also co-host of weekly community radio show The Salon on Bush Radio 89.5 that unpacked the issues facing queer people.

Kester experienced the realities of politics and government during her stint as Media Liaison for COPE in Parliament, including engaging with LGBTI communities on the Civil Union Amendment Bill that was championed by the party’s then-Deputy Secretary-General, Deidre Carter.

In November, she was acknowledged by the Feather Awards for her impact in the community with the Role Model of the Year award.

Establishing an LGBTI Desk in the premier’s office has been touted for almost seven years. Why did it take so long?

The short answer would be the lack of political will. However, it has been documented that the Premier has spoken about the establishment of the LGBTI Desk and has been vocal around the issues affecting LGBTI persons. In my view, and knowing the slow pace to which provincial strategic plans and processes are solidified and implemented, to a degree the lag in action from the Province can be understood. The approval processes in sections of government are invariably clouded with bureaucracy. That being said, a seven-year period of inaction cannot be justified.

So what exactly is an LGBTI Desk and what does it do?

The LGBTI Desk champions the issues of LGBTI communities in the province. The aim is to establish operational and strategic plans by the province to ensure that all government departments have directives to implement, execute and monitor the impact of programmatic activities that are developed to address the needs of LGBTI persons.

What difference do you hope the desk will make in the lived realities of LGBTI people in the province?

How much power or authority will the desk have?

Are there particular issues you are planning to focus on?

Each department has put forth plan regarding what they would like to address in relation to the needs of LGBTI persons. There is a definite focus on the response to hate crimes of LGBTI persons, access to mental health services and economic empowerment, to name a few.

How accessible will the desk be for ordinary LGBTI Gautengers?

There is room within the plans of the province to engage with community members and stakeholders within the LGBTI sector to ensure that their voices are represented in government planning and execution for LGBTI communities.

When will the desk be operational?

At this stage, there are already activities underway. Operational and strategic plans need to be solidified within the fourth quarter. When these are solidified, oversight of programmatic plans per department will commence.

What do you think are the biggest challenges you will face?

Within government, processes and procedures often hinder progress. Once plans have been solidified, it takes time to shift focus or add to the current agenda. Covid-19 has highlighted the need for agility in programming and how certain issues become exacerbated and the need to address these issues as they arise. Another challenge is the execution of the commitments made by government departments; we have often seen that written plans seldom translate fully to implementation. There will need to be consistent and precise oversight to ensure that this is a prioritisation of LGBTI service delivery. The budgetary allowance for the LGBTI Desk is a concern. There are limited funds within the desk which inevitably means a reliance of governmental budgets for effective execution of service delivery to LGBTI persons.

How much support have you received from the Premier?

The LGBTI Desk falls within the Transformation Unit within the province. The Chief Director of the unit has been very hands on in ensuring that the staff within the desk understand and have their mandate. The chain of command ensures that the Premier is aware of activities and the execution of plans of the desk.

You’ve worked in the civil society sector, often being critical of the government. Do you think that by working within the system you’ll have more tools to create change?

The hope is to change the system from the inside out. It is seldom that queer representatives are employed to ensure effective action within government. The hope is that because there is an understanding of the issues, barriers and marginalisation that LGBTI communities face, programming will be designed to effectively be executed and to address the issues in a way that does not just become a tick-box exercise.

Where would you like to see the LGBTI Desk in five years?

I would hope that the establishment of this desk creates a prototype for other provinces to follow suit. The hope is also that it is effective in addressing community needs in terms of execution and ensuring greater inclusion, access and human dignity for LGBTI persons. The hope is also that adequate budgeting is provided to the government to execute programmatic activities that combat homophobia and transphobia and ensure effective programming that will translate to the protection of the human rights of LGBTI communities.