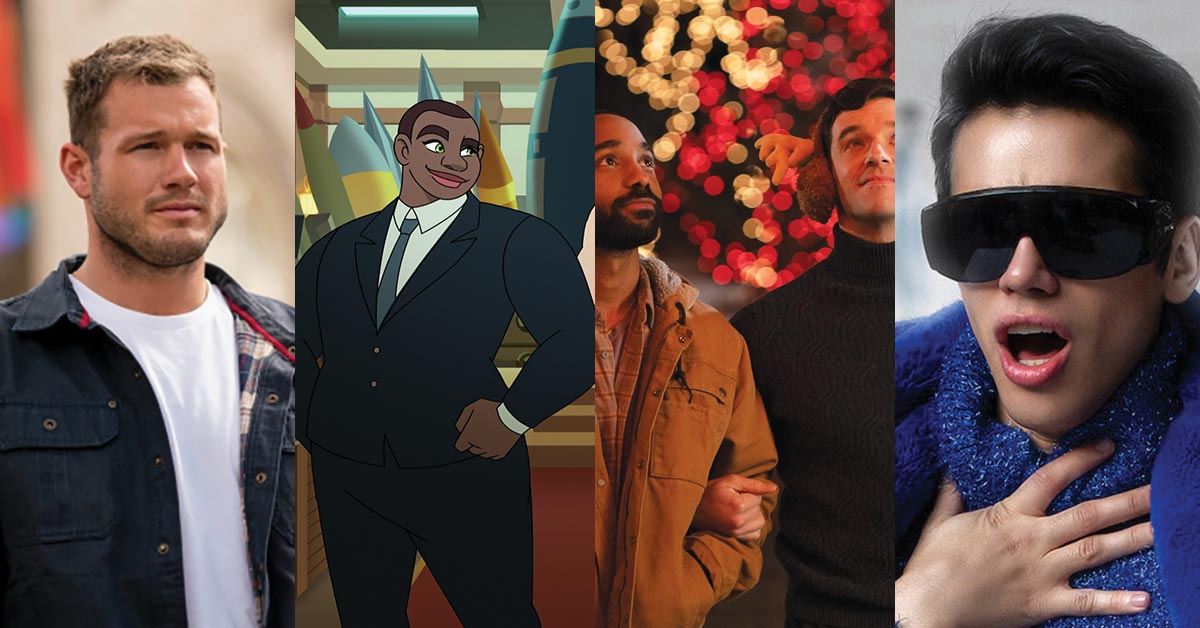 Is it just us, or did 2021 feel particularly long? As the year draws to a close, most of us are living for the festive break, but with Covid still very much around, many will opt to stay home instead of heading to their usual holiday destinations.

If this sounds like you, you’ll appreciate a few curated suggestions of gay series (and one movie) that are worth a watch.

Read on for seven gay Netflix shows that you can watch this festive season while you relax, regroup and recoup for 2022.

Former NFL player and Bachelor star Colton Underwood – who famously came out as gay in April – embarks on a journey to embrace his new life as an out member of the LGBTQ community. This powerful docu-series includes friends and mentors such as gay athletes Gus Kenworthy and Michael Sam and actress Fran Drescher. Colton not only looks backs on his own burden of living life in the closet but also the damage he caused to others around him (including allegations of stalking and harassing his ex-girlfriend, Cassie Randolph.) Not everyone in the LGBTQ community has welcomed the show, with some accusing Colton of using his coming out for fame and profit. Watch it and judge for yourself.

No Time For Shame

Fans of reality shows will thoroughly enjoy this series, centring on the globetrotting lifestyle of the larger-than-life Argentinian fashion designer, Santiago Artemis. Expect plenty of juicy action, both on the runway and off, and see how this designer rejects the expectations of society to follow his own path. (The trailer below doesn’t display English subtitles but they are included on Netflix.)

Animated comedies have truly come into their own over the past few years, with shows like Big Mouth addressing issues of queerness in a way that is nonchalant, albeit not beating around the bush. In Q-Force, a gay spy is sent to West Hollywood when his coming out doesn’t go off well with his superiors at the agency he works for. He meets a number of queer geniuses that he then recruits into a rogue crime-fighting force, functioning under Agent Buck, a very straight additional member of the newly-formed squad.

In this queer coming-of-age tale, the fictional Prince Wilhelm, heir to the Swedish throne, is sent to an elite boarding school where he meets and forms a close connection with Simon, another learner at the school. The strange newness of budding sexuality is a theme that any queer person will recognise and identify with.

In the midst of a global pandemic, two young video game streamers meet online and quickly form a bond. Of course, teen love is complicated as it is, but the added layer of maintaining a new relationship as the world is grappling with a highly contagious virus makes this show something many of us will identify with (especially if you’ve had to contend with trying to meet someone new in the past two years). The series is based on a popular Filipino web series.

Fashion fans, your attention, please. If you’ve not yet seen this show, which is based on the life of the American fashion designer Roy Halston Frowick (he created Jackie Kennedy’s iconic pillbox hat, which she wore to JFK’s inauguration in 1961) now is the time. Halston beautifully showcases the fashion industry in the 70s and 80s, and the series features big names – Ewan McGregor plays the titular role.

Single All The Way (film)

Who doesn’t love a festive season queer rom-com? After discovering that his boyfriend is married, Peter (Michael Urie) is embarrassed to go home for the holidays as a single man once again. He then decides to ask his best friend, Nick (Philemon Chambers) to pose as his boyfriend to avoid all those awkward questions. But, of course, their plan — and feelings — change when his family plays matchmaker. Single All The Way is fairly predictable but still funny and appropriately heart-warming.