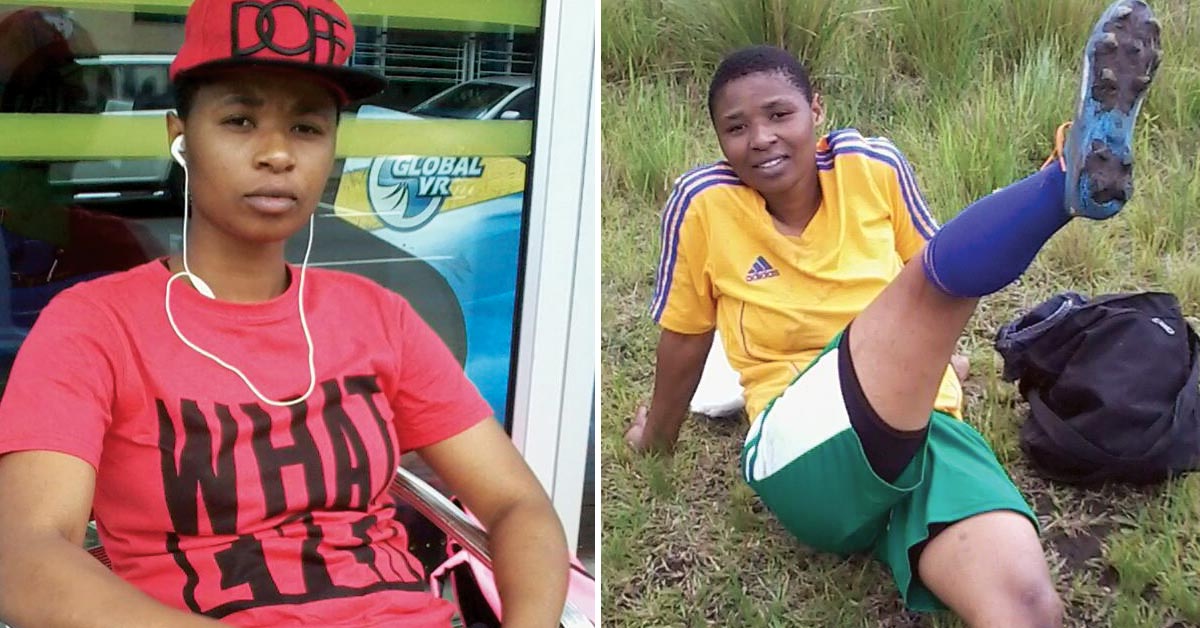 Pinky Shongwe had her life cut short in a suspected hate crime because of who she loved (Photos: Facebook)

Pinky Shongwe, a 32-year-old lesbian woman, has been brutally stabbed to death, reportedly because she simply rejected a man’s romantic advances.

According to SABC News, on 13 March, police received reports of a body lying along a path in Umlazi H-section, just outside of Durban .

“Upon arrival at the said place, police found the body of a woman with an open wound and other injuries on her eye and she was declared dead on the scene,” said KwaZulu-Natal Police Spokesperson Nqobile Gwala.

It’s reported that Shongwe had gone to a nearby shop with friends and on her return, she was approached by a man who professed his love for her. It’s alleged that when she told the man that she dated women, he stabbed her to death in a rage.

“Pinky was a very quiet person and respected people. I wish the person who killed her be found. We want justice as the family,” Shongwe’s sister, Nombuso, told the SABC. “Everyone has a right to life and [to] live the life they want and have a right not to hide their sexual preference.”

The slain woman was described as a sports lover who played for the Ugu District Municipality soccer team. The suspect in her murder remains unknown and he has yet to be arrested.

Hlengiwe Buthelezi, Director of the KwaZulu-Natal LGBT Recreation organisation, told Mamba that she was devastated by another murder of a queer individual.

“These incidents are not ending. I am very very shocked. Sadness is an understatement. I’d thought by now we wouldn’t be hearing such terrible news,” said Buthelezi.

She believes that not enough is being done to stem the tide of LGBTIQ+ killings. “Honestly, law enforcement must step up. We also need education, awareness campaigns, and of course, the Hate Crimes Bill.”

Last month, Martin Meyer, DA member of the KZN Provincial Legislature, slammed Premier Sihle Zikalala for not addressing the plight of the LGBTIQ+ community in his State of the Province Address.

Meyer said that “murders and attacks on this group continue to rise, making it increasingly dangerous for individuals to leave their own homes.”

He asserted that “despite the dire situation, the premier, in his State of the Province Address last week, did not say anything. Nor did he present any solutions to the ongoing killings of gay and lesbian citizens of our province.

“Instead, it was left to this marginalised sector of the population to go online during the address and raise issues such as prioritising the improvement of sexual and reproductive health, tailored to the LGBTIQ+ community,” said Meyer

Buthelezi agrees that the premier’s address was a missed opportunity. “He should have boldly condemned these killings and told the public that people will be arrested,” she explained.

In a statement, KwaZulu-Natal Social Development MEC, Nonhlanhla Khoza, condemned the murder of Pinky Shongwe and sent her condolences to the Shongwe family.

“We cannot claim to have freedom while some sectors of our communities live in fear and constant attack. We have an increasing number of people who have been murdered because of their sexual orientation. The list of victims of homophobic violence and murder increases daily,” she said.

Khoza urged people to be more tolerant of each other, saying no one had a right to discriminate against anyone based on sexual orientation.

At least 24 LGBTIQ+ South Africans were murdered around the country last year, sparking calls for government to take more decisive action against hate and fast-track the long-delayed Hate Crimes and Hate Speech Bill.