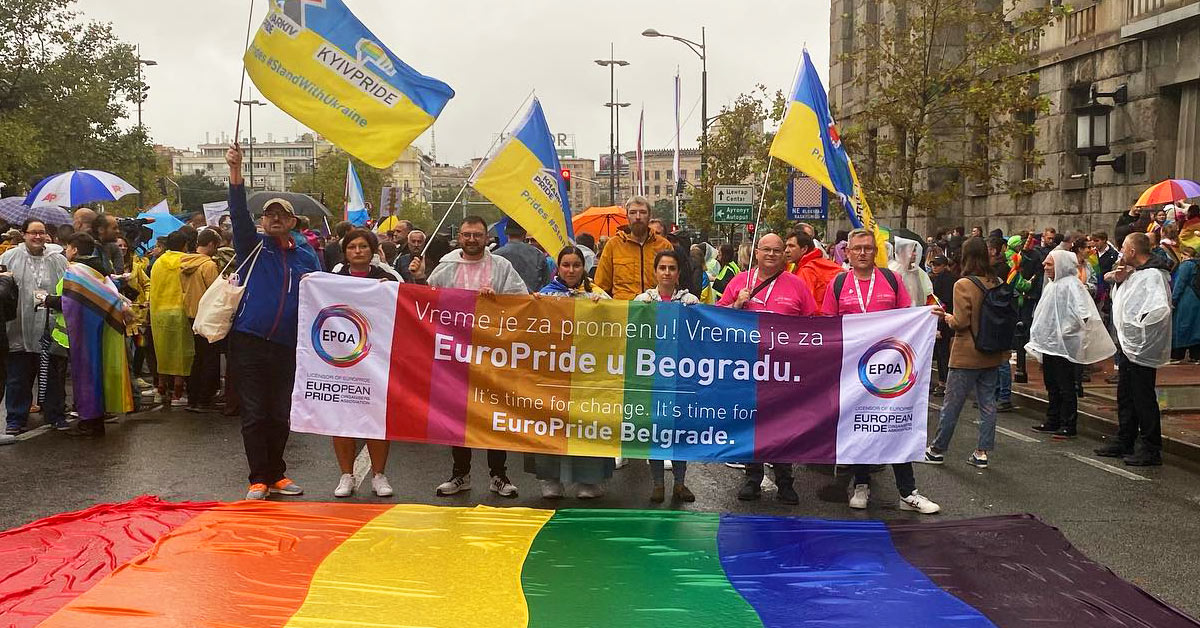 The march for the 2022 edition of EuroPride – a pan-European LGBTI+ Pride event hosted by a different European city each year – went ahead on Saturday in Belgrade despite violent protests and attempts to ban the event.

An estimated 7,000 people marched in the procession which the organisers hailed as a success and described “as the most important in the event’s 30-year history”.

The Orthodox Church and nationalist groups actively opposed EuroPride being held in Serbia and mounted large protests in Belgrade.

In late August, Serbia’s President Vučić announced that EuroPride was ‘cancelled’ despite the government having originally backed the event. Days before the march, the Serbian police banned the route, citing concerns that participants would not be safe from anti-LGBTI+ protesters.

The defiant organisers said they would march anyway. Following immense international pressure and outrage over the ban, the country’s openly-LGBTI+ Prime Minister Ana Brnabić personally authorised the march on the day it was set to take place.

Thousands of police members were placed along the route to keep marchers safe from queerphobic thugs. Officers engaged in several skirmishes with violent demonstrators, resulting in the arrest of 64 people and the injury of 10 police officers. No Pride marchers were harmed.

“We must acknowledge that the difficulties organisers faced in recent weeks was caused by inflammatory remarks made by the Serbian President, and then a failure of the Prime Minister and police to respect basic freedoms and rights,” said Kristine Garina, President of the European Pride Organisers Association (EPOA), which licenses EuroPride.

“The eleventh-hour reprieve from the Prime Minister yesterday was too little, too late. She can now show leadership by ensuring that all those who attacked our participants are brought to justice,” added Garina on Sunday.

Representatives of more than 50 Pride organisations from around the world were represented in the march. Dozens of diplomats, Members of the European Parliament, and EU Commissioner Helena Dalli also participated.

“EuroPride in Belgrade will go down in history as a turning point for LGBTI+ equality in Serbia and the wider Western Balkans region. We showed that Pride is not a threat to anyone, and whilst we marched peacefully, it was the far right, nationalists and fundamentalist Christians who battled police,” said Garina.

Next year’s EuroPride will take place in Malta which has been named the most LGBTI+ -friendly country in Europe for the past seven years by ILGA-Europe’s annual Rainbow Europe report.