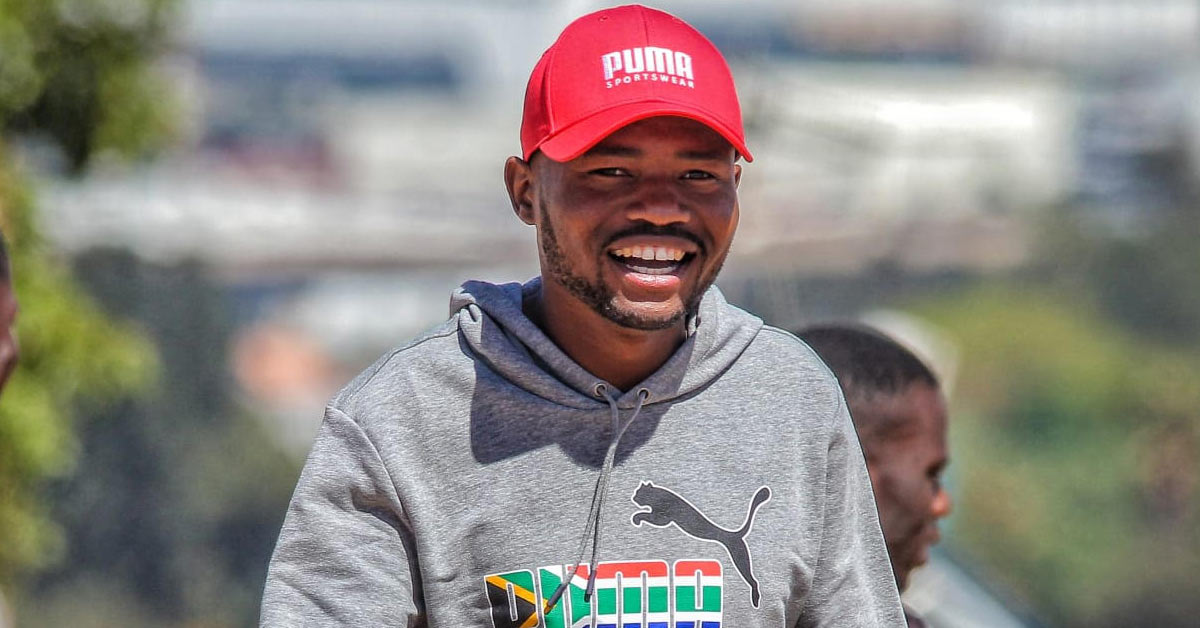 Out and proud goalkeeper Phuti Lekoloane is a champion of LGBTIQ+ inclusion in football (Photo: Daniel Hlongwane)

The tournament was founded in 2020 by the goalkeeper, who in 2015 came out on radio as the first openly gay professional male soccer player in South Africa.

Lekoloane became a figurehead for particularly gay male representation in the sport after speaking out about the discrimination he experienced, something that was not always welcomed by the football fraternity.

He tells Mambaonline that he is recovering from what he describes as a career-threatening injury. Lekoloane is in a way “grateful that those doors were shut because I was going to be silenced by the clubs and I would be living a lie,” adding, “I think I have another purpose to fulfil”.

Lekoloane has not only faced homophobia from team officials and other players but also realised that “even those who are homosexual sportsmen are not comfortable in my presence because of how vocal I am with queer representation in football”.

The LGBTI Legacy Games aim to challenge homophobia, biphobia and transphobia in sport and to encourage LGBTIQ+ inclusion and participation. And the need could not be greater.

According to a survey by Lekoloane’s foundation, 79% of LGBTIQ+ respondents felt that there is a problem with homophobia in sports and 66% of LGBTIQ+ people surveyed felt that homophobia and transphobia are barriers to participation in sports.

“You are not alone. Live your truth, be yourself…”

The third edition of the tournament is taking place at the Mayibuye Sports Ground in Midrand this October, which is marked as Pride month in Gauteng and several other places in southern Africa.

Amateur teams from the province and Limpopo will play a series of rounds starting on 9 October and concluding with the semi-final and final on 30 October. Lekoloane says some of the teams have LGBTIQ+ community members as players while other teams simply support the cause of LGBTIQ+ equality and inclusion.

He believes that efforts like the LGBTI Legacy Games and growing local and global pressure for inclusion are having an impact. “The soccer fraternity is slowly but surely becoming accepting of the LGBTIQ+ community,” he says.

Despite this, Lekoloane admits it has been a challenge to find sponsors for the tournament. “In some boardrooms when you start mentioning the LGBTIQ+ community the mood starts changing.” He is nevertheless grateful for the City of Joburg, through Joburg Sports, and Score Energy Drink “for being with us and supporting the cause”.

It’s telling that since Lekoloane’s coming out seven years ago, no other male professional footballer in South Africa has followed suit, despite his knowledge of several male professional players “who are either gay or bisexual and are in the closet”.

Does he have any advice for them? “You are not alone. Live your truth, be yourself and do your best,” he says, adding: “We need to create safe spaces for footballers to come out. I don’t wish the hostility I felt on anyone, because not everyone can survive homophobia in a sport like football.”

The 2022 LGBTI Legacy Games take place at the Mayibuye Sports Ground every Saturday and Sunday from 8 to 30 October from 10:00 to 18:00. There is no entry fee, and everyone is welcome to attend. “All you need is a camp chair and your refreshments,” says Lekoloane.